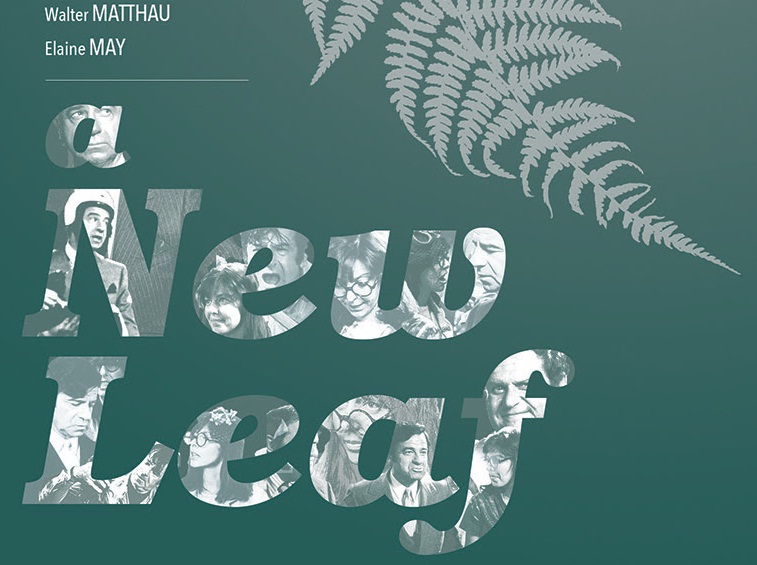 Adam takes look at Elaine May’s brilliant debut feature A New Leaf being released by Olive Films in a limited edition.  Does the film’s comedy still have a bite?  How credible is gruff Walter Matthau as a dilatant?  Is there true romance or true crime on this film’s mind? Read on …

To state that Elaine May is a national treasure is an understatement.  From her work with Mike Nichols as the comedy team Nichols and May to writing (mostly uncredited) some of the great comedy/dramas of the 70’s and 80’s (see; Heaven Can Wait, Reds, Tootise, Labyrinth) to her own directorial career she’s proven continually that she rivals anyone for smarts and unique eccentric comedy.  A New Leaf her almost-forgotten directorial debut finds May as not only the writer but director and co-lead with Walter Matthau.  As triple threats go Elaine May is as dangerous as they come.  A New Leaf is one of the best comedies of the 1970’s which rivals any of the work done by her male counterparts Hal Ashby, Woody Allen and Mel Brooks.

A New Leaf is the darker side of the comedy with Walter Matthau cast as Henry Graham a New York dilatant so clueless he doesn’t understand the concept of “You have no money”.  As his trust fund has dried up because of frivolous spending Henry is forced to find himself a wife.  Henry finds an unsuspecting mark in Henrietta Lowell (May) a clueless klutzy Botanist with a huge inherited fortune.  His plan is not just to marry her but to also find a way of killing her off to allow him to continue with his bachelor lifestyle unabated.

Even with these darker elements of the story, A New Leaf manages to be one of the most endearing and delightful romantic comedies you will ever see. The magic of the film is in May’s wonderfully eccentric writing of not only Henry and Henrietta but the entire cast.  Not one part is underwritten or miscast.  The film is overripe with pitch-perfect performances not only from the Matthau and May but everyone down the line from Jack Weston as Henrietta’s befuddled conman Lawyer to James Coco as Henry’s misanthropic Uncle.

The film never veers far away from Henry and Henrietta’s relationship always keeping the two mismatched beings constantly colliding with one another.  As the film twists and turns into unexpected territory May is able to perfectly balance the light comedic elements with the darker shades of humanity.  It’s the tonal balance that makes A New Leaf such a wonderful delight to behold.  You are never quite sure if Henry is going to not kill Henrietta until the final moments of the film.  That is the most brilliant masterstroke of the entire film.  May’s ability to have you root for Henry all the while never sure what he will do.  A New Leaf may have been an ill-fit for audiences of the 1970’s but it should now find its audience four decades later…

The new restoration from a 4K scan of the original camera negative is near perfect.  Having seen this film on 35mm last year at the New Beverly and also looked at Eureka!’s Version of the transfer, this is by far the superior one.  A New Leaf has never looked better than it has here.  There are slight differences from the Eureka! Disc that Olive Films disc is the better transfer.  The transfer looks to have deeper black levels and contrast is tightened up a bit.  It’s a wonderful transfer and the best version of the film so far on home video.

The Cutting Room Floor: Editing A New Leaf, is a 13-minute piece with Angelo Corrao about the turmoil during post-production and editing of the film.  He discusses the 3-hour cut that May had turned in and her fight with Paramount over the film and keeping it unique and quirky.

Women in Hollywood: A Tragedy of Comic Proportions is a 7-minute interview with Amy heckling that isn’t as much about A New Leaf but as much as it is a piece of the difficulty of being a female director in the 70’s and 80’s.  Great piece to give more context as to when this film was made, including a great John Landis story.
Included on the disc is the short story that May adapted The Green Heart and a vintage trailer.

A New Leaf is available now from Olive Films.