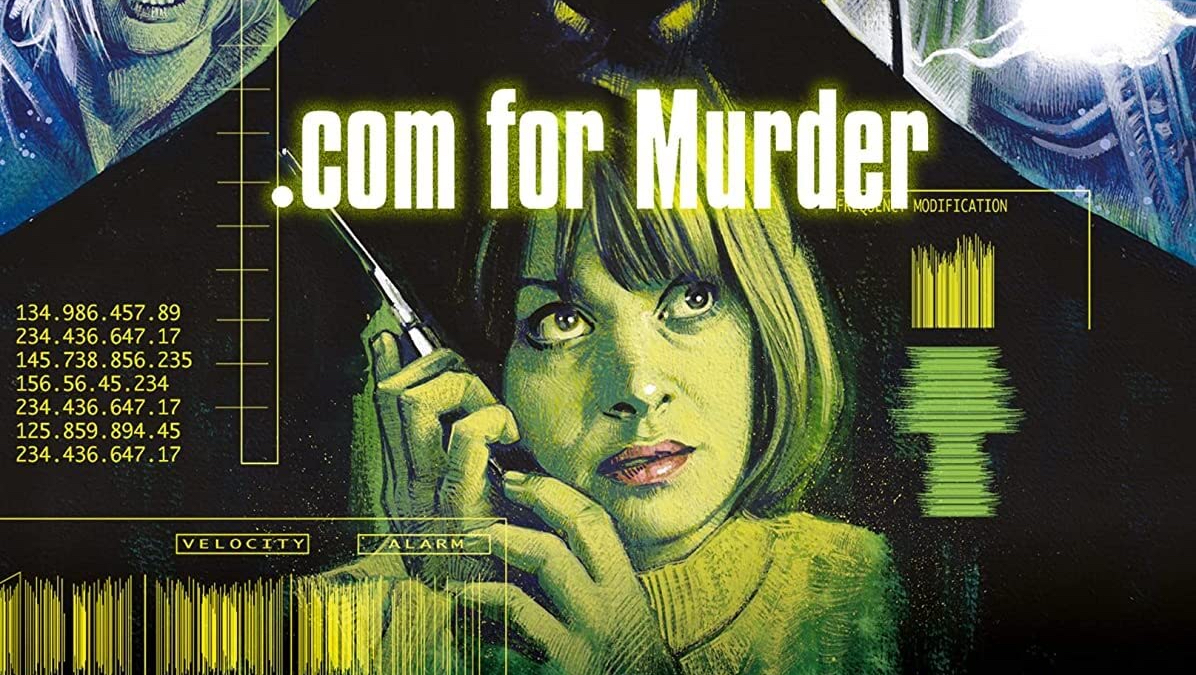 B-Movie Maestro Nico Mastorakis dives into his Hitchcock obsession and Internet Dating in the early ‘00s in Dot Com for Murder. New to Blu-Ray from Arrow Video!

Move over Brian DePalma… Nico Mastorakis wants a shot at the crown title biggest Hitchcock Fan Boy.  Dot Com for Murder may be one of the most Cyber-y Cyber Thrillers to ever Cyber Thriller.

After a skiing accident leaves Sondra (Nastassja Kinski) wheelchair-bound, her billionaire boyfriend Ben (Roger Daltrey) leaves her on a “business trip”.  No fear though, Ben’s house is state-of-the-art with an AI named Hal to help cater to any need.  To keep Sondra company, her sister, Misty (Nicolette Sheridan) comes over.  With a weekend ahead of them what do they do?  Snoop on Ben’s computer of course.  They discover he’s been a naughty boy chatting up young women on ALO (American Love Online… wink-wink).  Though to make matters worse Ben has incurred the wrath of an online serial killer (Jeffery Dean)!!! It’s only a matter of time until Sondra and Misty are under the killer’s sick twisted game.

Dot Com for Murder isn’t a bad film.  Though it isn’t necessarily a great or good film.  Is it entertaining?  You bet it is.  Mastorakis takes any sort of realism out of the picture rather than servicing his own stylistic wants and needs.  This is where the trouble lies.  The director and his co-screenwriter Phil Marr are so in love with the notion of making a Hitchcockian thriller they took only the Hitchcock and left the thriller part.

It also doesn’t help that Kinski and Sheridan seem bored out of their minds.  They are not as involved or overheated as the performers of Nightmare at Noon (recently reviewed here).  Though Jeffery Dean seems to be the only person with an understanding of how overwrought and well-worn the material is and manages to keep an arched overeager sense of play to his performance.  Huey Lewis – yes, of “The News” fame – is the other performer that manages to create some energy as the gruff albeit very stupid FBI Agent the women contact.

If early ‘00s B-movie psychological thrillers are your thing Dot Com for Murder may entertain.  If one is looking for a thriller with Hitchcockian twinged stylings… look at De Palma’s work at the time as Dot Com for Murder sets up like Hitchcock but cannot deliver on the thrills.

The transfer provided to Arrow Video is a strong verbose image.  The stylishly shot film looks sharp with wonderful color reproduction.  One will note that the film has a heavy amount of SD Video (that’s been transferred to 35mm) throughout the film that’s filled with noise inherent within lower res video.  This is not a critique against the transfer, but one will notice this and it is a part of the style of the piece – the film has a serial killer stream killing his victims.

The Making of .com for Murder (38:01) – an archival featurette on the making of the film which Mastorakis discusses where the story evolved from with the rise of the internet (this was made in the early 2000s) and his love of Hitchcock.  Much of the featurette is very much like a micro-commentary with Mastorakis discussing not just his references to cinema but also to the “real world” research he did, taking us through casting, and location scouting – the importance of this because its primarily a single location, “the technical stuff” – his words, the production itself, and much more.  The featurette is a combination of interviews, b-roll footage, and finished scenes from the film.  Again, like the other featurettes on Mastorakis film’s discs, there is an attention to detail and enthusiasm that one cannot help but find enjoyment out of.

.com for Murder: The Unknown Story (38:01) – an all-new featurette producer-director Nico Mastorakis revisits Dot Com For Murder.  Similar to other features on his other Arrow Discs Mastorakis dives deep into the production – even showing us where he felt he failed as much as he succeed – which turns out to be a fascinating look at making the film.  If more filmmakers put a third of the effort that Mastorakis took into creating these next-level featurettes instead of a commentary track, more people would be inclined to watch special features.  Beautifully editing together media like test footage, b-roll, on-set interviews, stills, et. al. Masorakis is able to create a making-of that’s uniquely his own.  As many that have seen the work done on previous releases will attest to.  One hopes that Mastorakis continues this elevated work for all of his feature films not yet released – and even the few that have already been released lacking these touchstones to his film’s home video releases.

Interview with Huey Lewis (9:56) – this archival interview with the actor and lead singer of The News discusses the character and working with Mastorakis.  Lewis discusses his love of acting, how he approached the role, and much more.

Dot Com for Murder may not execute its thrills successfully but Arrow with its extras and new transfer does.