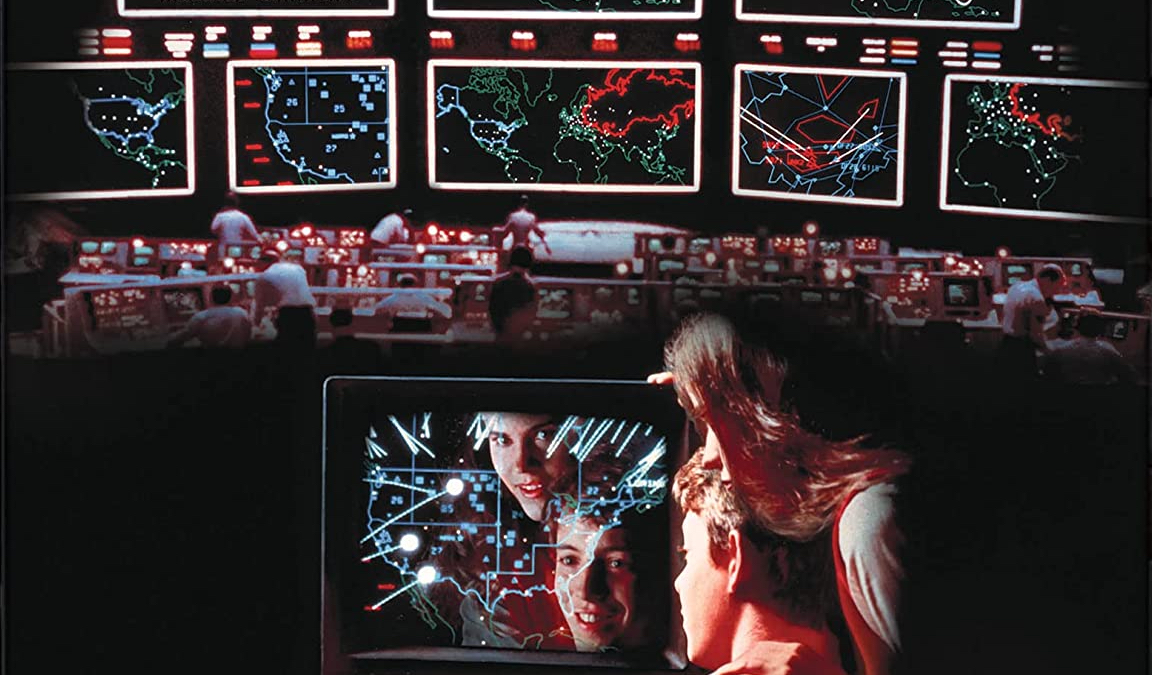 In my estimation, there are only really two hacker movies.

WarGames since its release on home video has been a personal favorite. Part of the power of both movies is that they’re not what people would traditionally think of as films about “computer hackers”. David (Matthew Broderick) is just a curious kid who’s bored by school and interested in computers and video games – and happens to be a genius. Genius and clueless enough to think that hacking into a government facility’s mainframe is a actually just video game developer with the coolest games including GLOBAL THERMAL NUCLEAR WAR. But David and his friend – eventually something more – Jennifer (Ally Sheedy) never intentionally do anything malicious and once they do figure out the terrible events, they’ve set in motion to try to correct it when no one will listen.

The John Badham-directed film is an ingenious and ultimately human-based adventure.  What most ‘hacker’ films get wrong WarGames excels and gets perfectly right.  For all the computer screens, shots of giant supercomputers, and a character who is essentially an AI with a voice, everything remains character and human-based.  David isn’t irresponsible – well, maybe a little irresponsible – but learns once he’s let the genie out of the lamp only, he can put it back in.

It cannot be understated just how good, right out of the gate, Matthew Broderick is as the lead. It seems a forgone conclusion now in the shadow of Ferris Bueller’s Day Off but WarGames in what’s his debut lead performance is as shocking and delightful as watching Tom Holland in Spider-Man: No Way Home. There is just an innate likability to Broderick’s David. You understand why he’s doing what he does and also why Jennifer is so smitten with him. The work that he does with Sheedy is as impressive as the work against acting luminaires like Dabney Coleman, John Wood, and Barry Corbin. In fact, Sheedy is maybe more impressive than Broderick, as her Jennifer has so many leaps and bounds of logic that she makes look simple. All the while tracking beautifully Jennifer falling in love with David.

The ending of WarGames is an impressive feat of editing, musical composition, and acting that’s made all the more ingenious when you realize that the last thirty minutes take place in a single room surrounded by computer monitors.  In fact, the magic trick of it all is how Badham makes a single screen and an increasingly fast-moving game of Tic-Tac-Toe into one of the most thrilling bits of 1980s Apocalyptic Anti-Cold War brilliance.

The all-new 4K Scan of the Original Camera Negative in Dolby Vision is a minor miracle.  In all of its home video formats, the film has been a bit of a murky, hazy, early 1980s mess.  The 4K and Dolby Vision in tandem have brought out the best qualities of the film’s image and received back its negative.  Gone is the murky and what is left is a clean sharp image with a healthy sheen of grain.  The Dolby Vision has definitely darkened the image – which is typically the case – but has brought out more definition in the darker scenes.  The Dolby Vision and 4K have given the colors and white levels a nice pop giving the image an all-around elevated massive uptick in quality.  Shout Factory has given us a truly great upgrade to a film that desperately needed it.

NOTE: The Blu-Ray is sourced from the same transfer as the 4K UHD and is as good – albeit slightly lesser than the 4K UHD as would be suspected.

The archival audio commentary by Director John Badham, Writers Lawrence Lasker, and Walter F. Parkes is a winner – it was recorded during the Laserdisc and early DVD days.  The trio begins how they achieved the sandstorm right outside of Los Angeles for the opening moments of the film.  Some of the details include this being Michael Madsen’s feature film debut, the challenges making a lower budget film, some of the script changes and additions that were done by other writers, the academy awards nominations the film was nominated for, the NORAD set vs the reality – as all three have been in the real NORAD, the complexity of the screens and syncing of monitors in the NORAD set – and how it was achieved back when they used 35MM and in the 1980s,  Badham’s preference to do things in camera for FX so that his actors have more to react to, a discussion of the technical limitations at the time and how they pressed for “narrative” purposes – including a hilarious aside by Badham about “modern” modem speeds, the original incarnation of David by the writers – and how accurate it was for genius programmers, after the movie how Apple gave Lasker and Parkes IIe’s, the relationship between David and Jennifer and how it was developed and written, the work of Eddie Dezen and Maury Chaukin, the work of Sheedy and Broderick, the design and development of JOSHUA’s voice, working with various military and DOD personelle that all agreed with the themes of the script, how the DEFCON orders go – and their error in the film and script, the phone work being done live instead of prerecorded, the work of cinematographer William Fraker, the work of Dabney Coleman, the WOPR computer and how they designed it, taking inspiration from Hitchcock’s North by Northwest, how they constructed David’s escape from NORAD, the various tricks and hacks that they researched with true hackers and what they just made up, the work of Martin Breast before he left the film – and what specifically he shot (only two scenes),  the four days he had to prep – when Badham had been promised 4 weeks, the initial conception and inspiration for Stephen Falcon – being Stephen Hawkins (clever name play), the dinosaur model “air plane” and how it worked, John Wood’s work as Falcon – how he was a very different character and how it changed the ending during production, the work of the other writers – Walon Green and Tom Mankiewicz and the “on the nose” nature of the dialog in certain scenes, the writing and direction of the finale and how it was developed and executed, and much more. No need to change what isn’t broken.  Though recorded in 1998, this track is still a great informative and entertaining track with Badham, Lasker and Parkes all in a lively good mood.

Loading WarGames (45:05) – is an archival featurette is on the making of WarGames.  This making-of takes a detailed look at the development of the story, the pre-production, production, and eventual release and post-life on home video.  The 45-minute does a great job at giving insight into the development of the story, the context in which the film was made – with the Cold War, the troubles with production, and eventual release.  Some of the other details the doc covers include the original story which features a Stephen Hawkins figure with a son, the research – surprising to the writers – they did into NORAD, the rise of computer intelligence, AI,  and military defense, the changing of the story, hiring Martin Breast, the casting of the film, the firing of Parkes and Lasker, the troubles with Breast directing which eventually led to his firing, the hiring of John Badham as Breast’s replacement, Badham’s going back to the original script and hiring Parkes and Lasker back, Broderick’s “research” into being a hacker, Sheedy’s work and her experince on the set, the work of John Wood, the work of Barry Corbin, the work of Dabney Coleman, Tom Mankiewicz contribution to the script during production, the infamous “pissing on a spark plug” line from Corbin – and a larger discussion of improvision during the film, the design and creation of the NORAD set – and a wild studio note on the set, the computers in the film and how they went about creating a “film language”, how they cast John Wood as the computer and they went about “designing” the voice, the post-production and editing of Tom Wolfe, the score by Arthur Rubenstein, songs that were produced and later dropped because of a new Studio Head, the last minute score, the preview screenings, the eventual release and its success, and much more. This is a great behind-the-scenes doc from the heyday of making-of and DVD content with access to the stars and behind-the-scenes crew.  Features comments by Director John Badham, Screenwriter Walter Parkes, Screenwriter Lawrence Lasker, Actor Matthew Broderick, Actor Ally Sheedy, Actor Barry Corbin, Film Critic FX Feeney, Producer Leonard Goldberg, Screenwriter Tom Mankiewicz, cinematographer William Fraker, Visual Consultant Geoffery Kirkland, editor Tom Wolfe, and others.

Inside NORAD: Cold War Fortress (10:54) – is an archival featurette looks at the formation of NORAD post-Cuban Missile Crisis.  The rise of Reagan and how that affected Russia essentially began the escalation of the Cold War, the doom’s day clock, and much more.  The main focus is the actual NORAD command and a look into the real NORAD and the facility itself.

Attack Of The Hackers (13:55) – is an archival featurette about the technology and the hacker community at the time of WarGames release.  The featurette focuses on how hacking began in the 1950 and 1960s at MIT and CalTech to how this evolved from helpful modifications to finding flaws and exploiting them to the difference between hackers and crackers to the reality of what hackers were doing and more.

Tic Tac Toe: A True Story (4:30) – is an archival featurette looking at the history of Tic Tac Toe and – very cheekily – what could be the most important “game” of humankind and interestingly enough the first computer game was in fact Tic Tac Toe.  The featurette is done with a huge amount of wit and tongue firmly in cheek.

WarGames is a 1980s classic.  Shout Factory with their 4K UHD upgrade has treated it as such.  Highest Possible Recommendations!!!

Shout Factory’s 4K UHD of WarGames is out December 20th