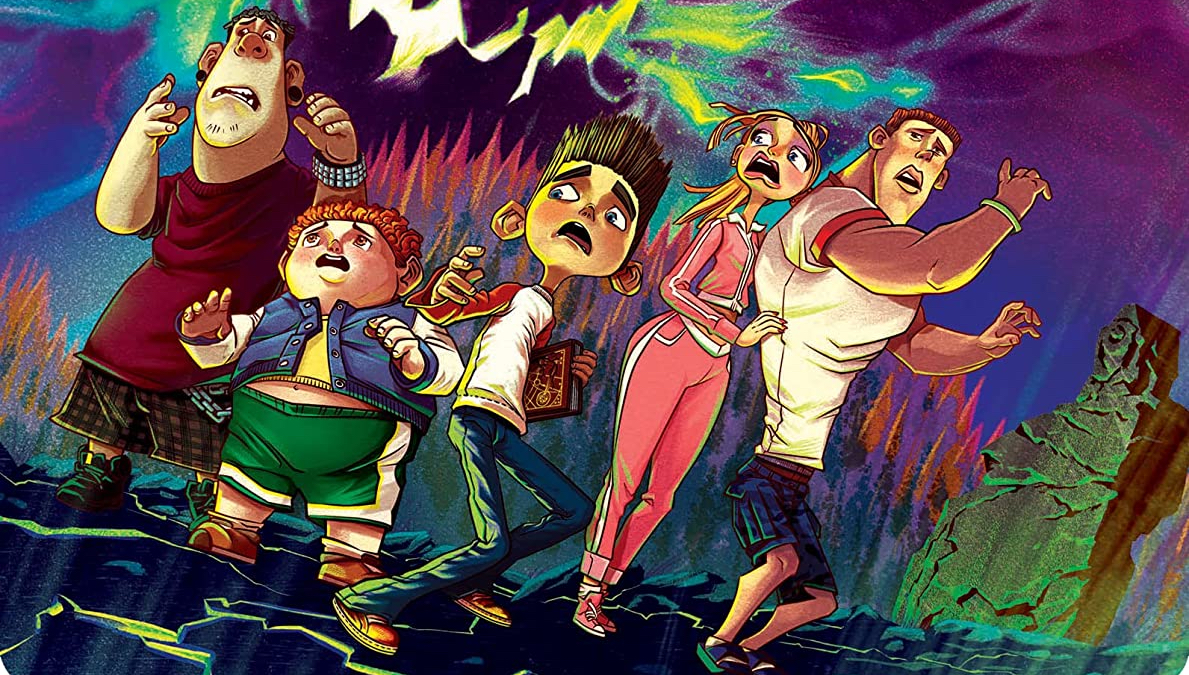 So many films say they’re attempting to recall the Amblin Produced films of the 1980s.  Rarely do they achieve what Spielberg and the likes of Richard Donner, Joe Dante, and other directors were able to do.  Enter in LAIKA the Oregon based Stop Motion Animation Studio and writer/co-director Chris Butler and co-director Sam Fell and give us a film that never feels like a direct rip-off of those films but in the spirit of them.

Norman (Kodi Smit-McPhee) is your average pre-teen.  Dad doesn’t understand his fascination with horror.  Mom loving plays middleman.  An older sister that despises him.  A Grandma that supports him in everything but is dead.  Norman can not only talk to his deceased Grandma but can see and talk to all the spirits that have unresolved issues in the parish of Blithe Hallow.  It is only with the passing of Norman’s great uncle, Mr. Prenderghast (John Goodman) does Norman’s power finds power.  In less than twenty-four hours Norman needs to lay the witch Agetha back to rest.  The reasons why and how are at the center of an adventure that increases in danger as it begins to involve zombies and crowds of unruly townspeople.

Much like Pixar at its apex and Studio Ghibli, LAIKA Studios crafts impeccably refined masterpieces of visual storytelling.  Paranorman is no exception as the film deals with childhood with an understanding that is beyond the stereotypes that are propagated by studio-produced entertainment and even filmmakers themselves.  The film itself takes movie monster troupes themselves the “zombie”, the “witch”, and the “ghosts” and spins them with enough heart and humor in the most unique of ways that it isn’t out of line to call Paranorman a truly original take on the horror film.

To say the visual design and composition of the film are impressive is an understatement.  Like Coraline and The Boxtrolls before it, Paranorman is designed to be both an utterly amazing visual magic trick and a complex triple dog dare (to borrow a phrase from a Christmas movie) of invention.  The set pieces are flat-out amazing and designed to be bold and invisible in a way that doesn’t distract from the storytelling but upon revisiting will make one wonder “how’d they do that?”.

Though none of that would matter if Paranorman did not work as a story, which it does masterfully.  Funny, inventive, emotionally resonant, and fairly critical Paranorman is the type of horror film that will delight the entire family and maybe the gateway for younger film fans into the world of genre filmmaking.

My initial review of the 2021 Transfer:

“The newly remastered transfer by LAIKA and Shout Factory is a nice upgrade from the Blu-Ray/3D BD that was released in 2013.  Similar to Coraline, the advancements in hardware and software have given us a better fuller more verbose image for Paranorman. This 2021 transfer’s colors just pop more and the image has a greater tolerance with its contrast and black levels making it look all around better and more like the image seen in theaters. Well worth the upgrade.”

Well worth the upgrade is even doubly so a year later!

This new 4K restoration of the film and Dolby Vision encoding gives everything an uptick in quality.  Paranorman is an ode to the stylish horror films of the 1970s and 1980s.  So, the image is already darker.  This image is even slightly darker but notes this is an affectation of the dynamic range that the Dolby Vision encoding imparts on the image. The blacks are deeper and darker, yes, but there is a luminosity and vibrancy of the image that – even when compared to the 2021 Blu-Ray Edition by Shout Factory this 4K Edition is leaps ahead.  The subtly the transfer brings to everything in the image is jaw-dropping.  The image is so clear and sharp that one can see the fingerprints of the artists on the characters as they go through the film.  Watch the visuals in the finale with the mixture of practical and CG augmentation and compare it to the 2021 Blu-Ray and one can see just how much of an uptick in every aspect of the image this transfer is.  I said it in my Coraline review, and it bares saying again here… The work done here on this 4K UHD disc shows what a difference the platform can make even to the newest of Blu-ray editions – when time and consideration are taken into effect (as is the case here with Shout Factory’s work).  A true definitive edition for this wonderful gem of a film.

A note must be made about the inclusion of the new 7.1 Dolby Atmos mix.  The Mix definitely adds a layer of dimensionality to an already active sound field.  Paranorman is an even busier Atmos track than Coraline.  One just needs to sample the Van chase scene and the active sound field that is played to great effect to understand the time and consideration they took in creating this new track. Bravo to Shout Factory for ensuring that they took the time and patience to have the new soundtrack created.

One purchases Steelbooks for the art featured on the casing itself. Here are some images from the unboxing of the Steelbook edition of Paranorman.

NOTE: All special features – except the commentary track – appear only on the Blu-Ray.

The audio commentary by directors Chris Butler and Sam Fell begin with the reasons why they opened with the scene they chose and go into an informative track.  Some of the details include how they achieved the movie within a movie, the relationship with grandma and how the solution to the end problem was built into the beginning, the visual inspiration from photographer William Ableston, the work in pre-production with many of the creators of The Secret of Kells and Wolfwalkers, the kind of comedy they were trying to achieve, the various in-jokes that are related to horror films, the troubles that came up with shooting stereo (aka native 3D), how The Golden Girls influenced the development of Grandma’s look, the voice work and how the younger actor’s scenes were achieved, the specifics of creating the zombie initial appearances, the car chase and the difficulty in achieving it, references to Scooby-Doo, how they developed the third act, the challenges to create Aggie and the lack of CG augmentation, and so much more. Much like the commentary tracks for both Coraline and The Box Trolls this track gives an amazing wealth of information about the creation of this complex stop motion work of art.  They even talk through the great credit sequences and for the final little end credit sequence (which has nothing to do with the film itself but everything).

Inside LAIKA: Discovering The Characters And Effects Of ParaNorman (12:51)– is an all-new featurette that looks into the work that goes into creating a performance in stop motion and the FX and lack.  The featurette has some great looks at test footage behind the scenes of the process and a look at each character and how they approached them including some great tests for each and some up-close behind-the-scenes footage especially for the bigger set pieces of the film.  Comments by directors Sam Fell and Chris Butler, Producer Arianne Sutner, Producer/Lead Animator Travis Knight, production designer Nelson Lowery, visual effect supervisor Brian Van’t Hul, animation rigging supervisor Oliver Jones, animation supervisor Brad Schiff and others.

Inside LAIKA: Revisiting The Puppets With LAIKA’s Animation Team – this all-new featurette is a look at the various characters in the film.  The 1 to 2 minute featurettes are broken down by character and are essentially micro-commentaries by the animators discussing the animating the character.

Feature-Length Storyboards (92:03) – the all-new feature is like the recently released Coraline and The Boxtrolls and most Shout Factory GKIDs Studio Ghibli’s Blu-Rays.  As “animatics” have become a vital part of the animation process this is a vital including, especially for anyone interested in any form of animation including stop-motion.  It’s a great way to compare the finish product and how much character and subtly the animators place into the completed animation.  Watching this along with the other two LAIKA Studio Blu-Rays with the same featurette one can see the technology they use to create the storyboard/animatics evolve as this version is much more refined with colored sequences and other pieces that help give this rough form of the film a bit more life and understanding.

Peering Through The Veil: Behind the scenes of Paranorman (4041) – This carry over from the original Blu-Ray disc, like the one from Coraline disc, is still an excellent making-of documentary. The 40-minute documentary covers all aspects of the production leaving nothing not discussed.

You Don’t Become a Hero by Being Normal (2:43) – an archival EPK-style featurette looking at the behind-the-scenes crew and their childhoods being labelled “strange” and how it relates to the message of the film.

A Norman Childhood (2:03) – an archival EPK-style featurette looking at writer/co-director Chris Butler and the origins of the film.

Playing as a Profession (2:18) – an archival EPK-style featurette looking at co-director Sam Fell and directing a stop motion film.

Making Norman (1:34) – an archival EPK-style featurette looking at how Norman the Puppet/Armature is made in this time-lapsed video (it can also be seen at the end of the film).

This Little Light (1:15) – an archival EPK-style featurette looking at how a lamp is made in miniature.

Have you Ever Seen a Ghost (2:11) – an archival EPK-style featurette asking the cast or crew they’ve ever seen a ghost.

The Zombies of Paranorman (2:14) – an archival EPK-style featurette looking at who they designed the zombies.

The Paranorman Blu-Ray in 2021 was a perfect complement to the film. The 4K UHD with Dolby Vision and Atmos Encoding double-downs on that sentiment.  Shout Factory has given up an upgrade worthy of the film.  HIGHEST POSSIBLE RECOMMENDATIONS!!!