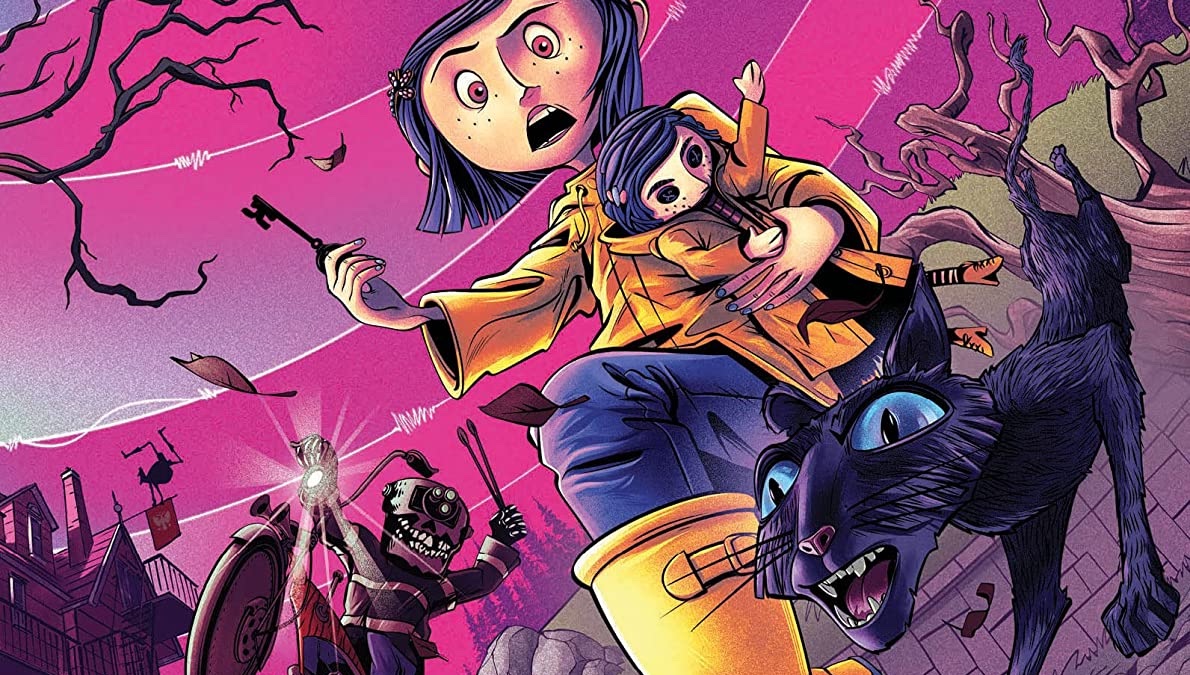 Henry Selick’s beautiful adaptation of the Neil Gaiman novel Coraline is a distillation of the best parts of the director and author’s work.

Coraline (Dakota Fanning) has moved to a new town and home with her writer father (John Hodgman) and writer mother (Teri Hatcher).  Bright and adventurous at the cusp of teenagerdom where someone both is in need of their parents and repelled.  Caroline discovers that there is more to the house than the strange residents.  That discovery is a magical alternate world.  One where people appear to be the best of their selves. One where Mother and Father do not ignore, Cats (Keith David) talk, and mouse performers feats of Carnival Daring.  Beneath this perfect exterior hides something sinister something that Caroline may not escape.

The film is as much a Selick’s as it’s Gaiman’s.  The adaptation feels like a successful marriage between two similarly-minded artists.  Part of what makes Gaiman’s novels special is the voice and adroit dry wit he brings to not just the real world but the world’s magic.  The way that Selick’s film accentuates Gaiman’s whimsical and poetic words with visuals and characteristics of the normal and magical.  Coraline understands the heavy lifting that Gaiman’s vocabulary does is the character design, voice work, set design, and camera work.  Though someone who wants a one-to-one adaptation will be disappointed as Selick makes adjustments that are more cinematic though Gaiman fans may find issues with.

Coraline is the kind of dark fantasy that Gaiman and Selick specialize in, but we rarely get in cinema.  More than a decade on the film has only grown in esteem as a neo-classic.

My initial review of the 2021 Transfer:

“The new transfer is an improvement over the original Universal Release of the film from back in 2009.  The over a decade of hardware and software improvements is shown here.  The image is not sharper or clearer.  It’s the color reproduction and contrast levels that really stand out.  The film uses color to distinguish its world and a comparison of the two discs one can tell the difference.  The 2021 transfer has just that much more pop to the color and that much more subtly to the contrast and black levels that definitely makes this an upgrade purchase for the Transfer alone.”

This new 4K restoration of the film and Dolby Vision encoding gives everything an uptick in quality.  The image is sharper and more vibrant.  Yes, the image is slightly darker but note this is an affectation of the dynamic range that the Dolby Vision encoding imparts on the image. The blacks are more profound and darker, yes, but their a luminosity and vibrancy of the image that – even when compared to the 2021 Blu-Ray Edition by Shout Factory this 4K Edition is leaps ahead.  The level of detail is jaw-dropping when compared to any other version of Coraline on the market.  A side-by-side comparison of the mouse circus scene and the level of detail between the 4K and Blu-Ray is made clear.  On the 4K, the costuming of the mice with the threading can be made out very clearly which the Blu-Ray struggles to reproduce.  The work done here on this 4K UHD disc shows what a difference the platform can make even to the newest of Blu-ray editions – when time and consideration are taken into effect (as is the case here with Shout Factory’s work).  A true definitive edition for this wonderful gem of a film.

A note must be made about the inclusion of the new 7.1 Dolby Atmos mix.  The Mix definitely adds a layer of dimensionality to an already active sound field.  Bravo to Shout Factory for ensuring that they took the time and patience to have the new soundtrack created.

One purchases Steelbooks for the art featured on the casing itself. Here are some images from the unboxing of the Steelbook edition of Coraline.

NOTE: All special features – except the commentary track – appear only on the Blu-Ray.

The archival Commentary by director Selick and composer Coulais is an informative track.  Beginning with how the project came to be by reading Gaiman’s novel to how the film came to be stop-motion (including how A Nightmare Before Christmas helped) the track really gives details about the production from all sides.  Details include how the adaptation differs from the novel, how he adapted the film, discussion of the process and how voice, animator, and design all inform on the visuals, how an animation film is built, the logistical trouble that was created in the years it took to complete, their use of 3D printing which was a first in Stop Motion and has become a norm (this was thanks in large part to Selick’s relationship with the creator of 3D printing), the inspiration of the visual look from illustrator Tadahiro Uesugi, the lack of influence of Dave McKean (who did all of the art in the book), the various ways they animated the specific characters (as techniques often varied from character to character), the 3D work they did (the film was shot with 3D in a unique way), and much more.  Note Composer Bruno Coulais does not show up until the end credits.  Selick’s tracks are always educational, especially for those that are either interested in getting into animation or just interested in the format itself.

Inside LAIKA: Discovering The Characters Of Coraline (10:45) – is an all-new featurette that looks into the work that goes into creating a performance in stop motion.  The featurette has some great looks at test footage and behind the scenes of the process and a look at each character and how they approached them including some great tests for each.  Comments by director Henry Selick, lead animator Travis Night, lead animator Trey Thomas, animator Brad Schiff, animator Amy Adamy, animator Suzanne Twining, animator Juliana Cox, and more.

Inside LAIKA: Revisiting The Puppets With LAIKA’s Animation Team – this all-new featurette is a look at the various characters in the film.  The 60 to 90-second featurettes are broken down by character and are essentially micro-commentaries by the animators discussing the animation of the character.

The Making Of Coraline (36:14) – This carryover from the original Blu-Ray disc is still an excellent making-of documentary. The 36-minute documentary covers all aspects of the production leaving literally no stone unturned.  Featuring comments by director Henry Selick (who acts as a host of sorts for the documentary), voice actor Dakota Fanning, novelist Neil Gaiman, Maddy Gaiman (who is the inspiration for Coraline), voice actor Jennifer Saunders, voice actor Teri Hatcher, voice actor Dawn French, voice actor John Hodgman, and more behind-the-scenes crew.  The featurette is broken down into 10 sections but there is a “Play All” function.

Creepy Coraline (5:03) – an archival featurette discussing the horror aspects of the film and how they created the various creepy crawlers that inhabit the world of the film.

Deleted Scenes (8:44) – director Henry Selick introduces the 6-deleted scenes with animation in various forms of completion.  Note, the final deleted scene is a compilation of “odds and ends” cut for timing.

Feature-Length Storyboards (94:02) – much like Shout Factory/GKIDS editions of their Studio Ghibli films they have smartly included the storyboard version of the film.  As “animatics” have become a vital part of the animation process this is an essential inclusion, especially for anyone interested in any form of animation including stop-motion.  It’s a great way to compare the finished product and how much character and subtly the animators place into the completed animation.

If you thought that Coraline couldn’t be any more charming and visually arresting wait till you see it in 4K UHD with Dolby Vision Encoding.  Shout Factory has given up an upgrade worthy of the film.  HIGHEST POSSIBLE RECOMMENDATIONS!!!