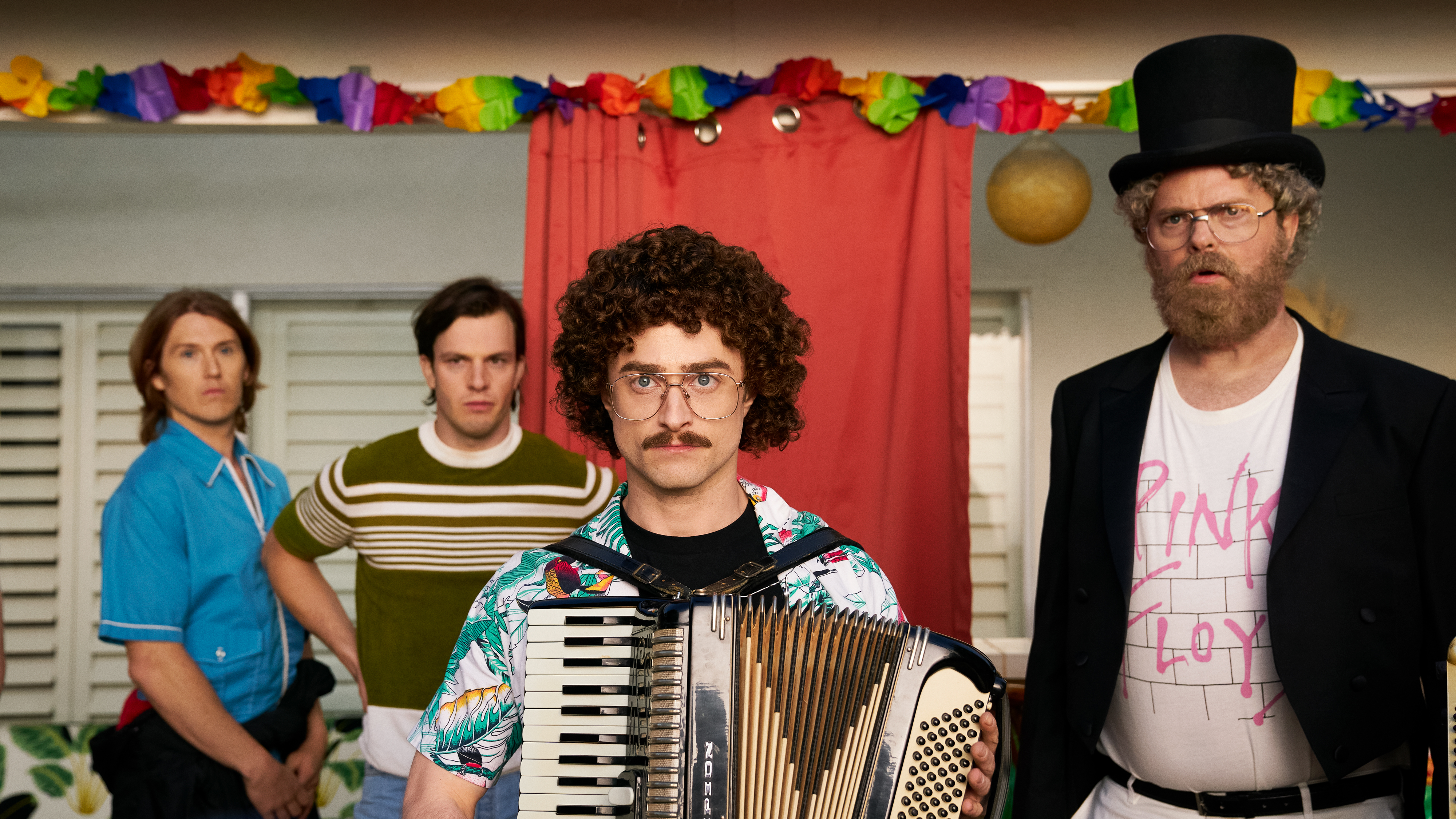 Nothing will prepare you for the life and times of Alfred Matthew Yankovic and his rise to superstardom, his fall from grace, and re-assention.  This is Weird: The Al Yankovic Story.

Award Season is upon us.  All the prestige pictures are being prepped for their marathon run to the end of the line.  Social Dramas.  Costume Dramas.  Of course, the most sortied the Bio-Pic.  Even more sortied-er (is that a word) is the Musical Bio-Pic.  In fact, in 2022, we have one of those big shiny ones coming out at the end of the year.

No, bother with any of that.

The only Award Seasons Contender that matters. The only Musical Bio-Pic you should be seeing this fall, or any fall for the next hundred years is the one about Mr. Alfred Matthew Yankovic aka “Weird Al” Yankovic.  WEIRD: THE AL YANKOVIC STORY is everything you’ve ever wanted in a Bio-Pic and more!

Tracing the humble origins of Al (Daniel Radcliffe) from troubled home life – what musical genius doesn’t have a troubled home life – to closeted Polka Musician to instant Superstardom to the romance with Pop Icon Madonna (Evan Rachel Wood) to his descent into Alcoholism to his reemergence to greater heights taking on Pablo Escobar (Art Castro).  Aided or helped or destroyed by various (in)famous figures of the time like Oprah (Quinta Brunson), Dr. Demento (Rainn Wilson), Hulk Hogan (James Preston Rogers), and others you will definitely recognize.  All of this – incredibly true account – done with the music by the man himself featuring his greatest hits “My Bologna”, “Eat it”, “Like a Surgeon” and “Amish Paradise”.

Like Walk Hard: The Dewey Cox Story, Popstar: Never Stop Never Stopping, and Spinal Tap, Weird: The Al YankovicStory takes its place in the Patheon of Bio-Pic Satires.  Though unlike the former three, Weird is not only a satire but actually about a real-life figure.  What started life as a short film from Writer/Director Eric Appel takes the ingenious short and turns it into a living and breathing full-length feature.

Appel’s film is steeped in the visual style of the Bio-Pic – with great visual references to the most legendary of the time.  It also the rise and fall of a star narrative used by so many fictional and non-fictional films – we see you A Star is Born.  Though this would all be an exercise in futility if the film did not work as a whole cohesive story not just a long line of sight gags and visual references.

It does succeed, on the highest possible level.

WEIRD: THE AL YANKOVIC STORY creates a heady brew of various genres and sends them up ever so lovingly.  A vortex of entertainment and hilarity.  At the center, is Daniel Radcliffe, showing that he is both the spiritual embodiment of Yankovic and NOTHING LIKE THE MAN.  Playing Yankovic has freed Radcliffe in a way that allows him to be as earnest as he wants as much as he’s allowed to be as goofy as he wants.  Charming, buffed out, and willing to do just about anything, Radcliffe has found the perfect role to allow him to go through all the emotions and comedic beats that any star could ask for.  What about action, you say?  Radcliffe finds himself doing some great moments of action – you’ll have to see the film to understand – that will have people asking, “Could the man who played Harry Potter play Wolverine?” (The answer is yes, you goofs).

Though, not to be outdone by Radcliffe, Evan Rachel Wood comes in to show us that we only need one person to play Madonna.  Wood approaches this incarnation of Madonna with the same level of complexity and subtlety as she does with any of her other performances.  Madonna in her hands is a bored femme fatale that wants nothing more than to be the most powerful person in the world with Al by her side.  The most impressive aspect of Wood’s performance is her nailed-down voice of the Lucky Star singer.  Rather than go cartoonish with it, smartly Wood has perfected Mads’ voice circa the mid-1980s. Don’t believe it… listen to Madonna’s interview with Dick Clark in 1984 and tells me that Wood doesn’t nail it – pun COMPLETELY intended.

Before you step into a theater and see that huge glossy bio-pic about that singer … stop and treat yourself to a true slice of happiness.  This bio-pic may not be the most accurate depiction of its subject’s life but what WEIRD: THE AL YANKOVIC STORY lacks in accuracy it more than makes up for in entertainment.

WEIRD: THE AL YANKOVIC STORY Will Be Available Exclusively on The Roku Channel on Friday, November 4, 2022