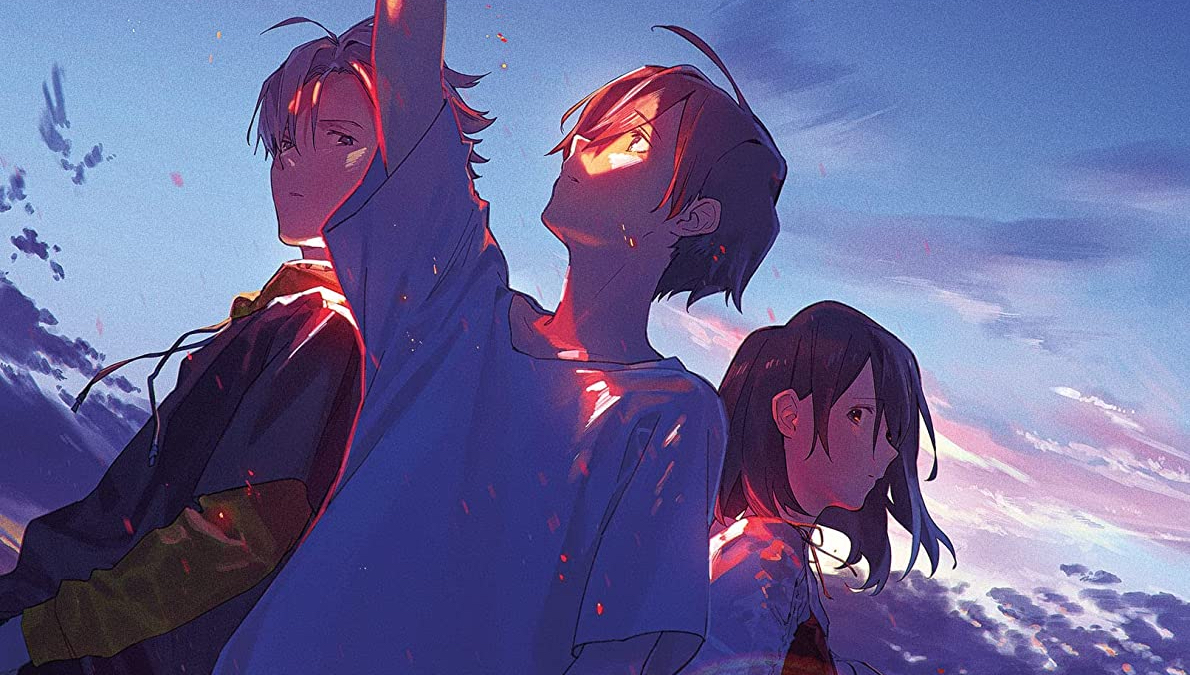 Summer Ghost is a haunting and beautiful story of loss in its many forms following three troubled teenagers searching for a ghost.  Shout Factory brings this special film to Blu-ray with impressive picture, sound, and special features.

Three teenagers Tomoya, Aoi, and Ryo meet up on an airstrip to see if an urban legend is true about a ghost who haunts this specific area.  After sparklers are lit the trio does indeed find that this is no mere legend.  Anya the ghost they see is not there to mere haunt them.  The reasons why Tomoya, Aoi, and Ryo are able to see Anya and help her find peace are at the center of this story of mortality.

Summer Ghost packs more of an emotional punch and story in 38-minutes than most films do in triple the time.  Working with writer Otsuichi, the film is not just a haunting ghost story but a tale of teenage friendship and mortality and at its core a mystery.  Though the filmmakers ensure this is not a genre film but a grounded drama.  A drama that at its end packs the kind of punch that one expects from director Makoto Shinkai.

If Summer Ghost is just a taste of the storytelling power of director loundraw can summon in a short film.  We eagerly await his feature-length film with towering anticipation.

Shout Factory continues to ensure that the picture – the most important part of any Blu-Ray – is beautifully rendered, as it is here.  The transfer is flawless with no artifacting or image issues that can come up with animation.  The contrast levels are beautiful here as the film uses some interesting and inventive color grading to evoke specific low-light situations.  The result is a disc that’s reference quality and shows just how subtle and astonishing animation can be.

To You Before Dawn (78:53) – this all-new feature-length making-of documentary that’s twice the length of the film is an in-depth look at the production of Summer Ghost from its preproduction days to its completion.  Much like the other Anime discs recently – see Belle – released by Shout/GKIDS – this making of is no mere puff piece.  The documentary takes you into the various meetings, interviews, work, recording sessions, and more to give you a behind-the-scenes work at the challenges to bring this film to life.  Rather than being guided by a voice-over narration – as is the custom in Japanese making-of – this documentary is more of a “fly on the wall” that allows us access to the creatives working through the various challenges – especially as this was produced during early 2021 and some of the worst of the pandemic.

Feature Animatic (37:12) – much like in previous Anime editions, Shout Factory has smartly included the feature in animatic form.  The Animatic is in a rough state with some of the dialog – in Japanese with subtitles of course – intact and no other real Sound FX or Music completed.  This glimpse into the animation process is not just fascinating for those wanting to go into Animation but Enthusiasts as well.  This uncompleted version gives one great insight into how things are built watching.  Those that think this viewing may be anything less than engrossing will be pleasantly surprised by just how watchable this version of the film is.  Bravo to Shout/GKID for continuing to provide these kinds of special features as they resonant with the animation fandom writ large.

Interview With loundraw (13:36) – this all-new interview with director loundraw begins with the origins of his name.  Some of the details include the origins of the film, the character he most relates to, the idea and genesis of his Flat Studio, the challenges and joys of making Summer Ghost as a short film, where the film is set, the collaboration with writer Otsuichi (pen name of Hirotaka Adachi), and much more.  Japanese with English Subtitles.

Summer Ghost is another winner from Shout Factory/GKIDS.  They have filled the Blu-Ray with great special features and most importantly beautiful image and sound.  HIGHEST RECOMMENDATIONS!!!