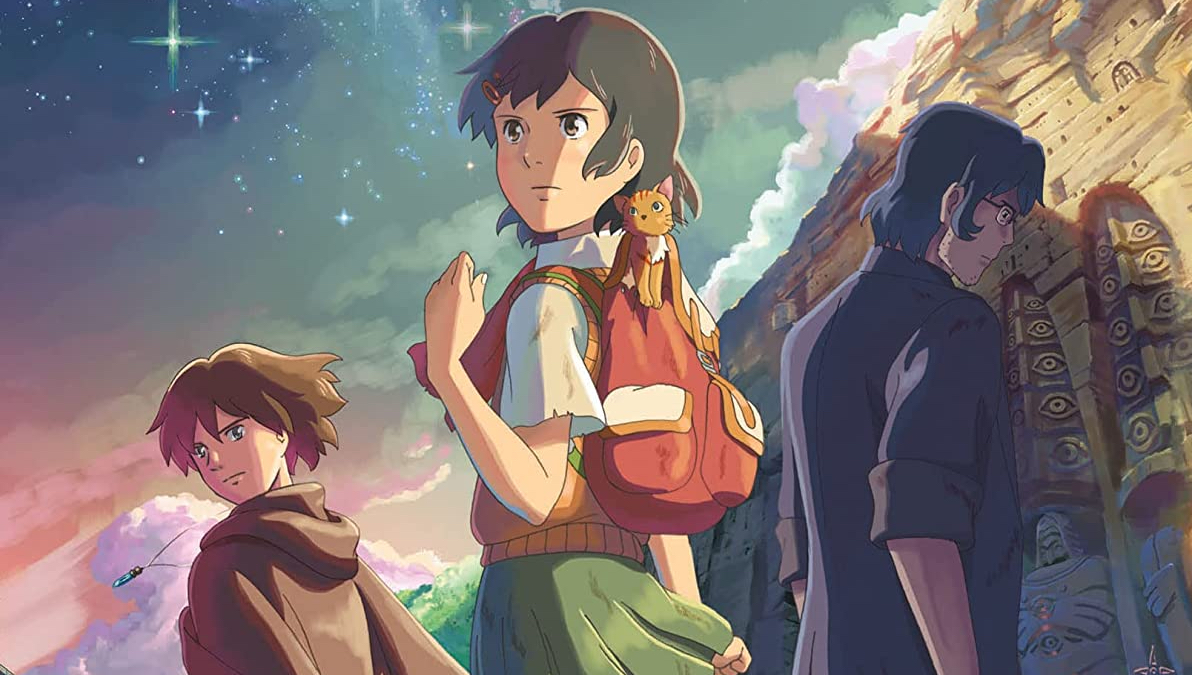 Writer/director Makoto Shinkai’s fantasy film Children Who Chase Lost Voices is an example of world-building at its finest.

Asuna Watase is still reeling from the loss of her father.  Her mother a nurse works so much that she has no time or understanding of what her daughter has or is going through.  Asuna spends her nights using a special crystal radio listening to fantastical music from where… she does not know.  Asuna on her way home is confronted by an animal that looks like nothing she or we have seen.  About to be eaten, she is saved by Shun, who unlocks another world for her.  Agartha, the world, is as wonderous as it is dangerous, and with other factions encroaching on this world, it could spell the end for Agartha.

World building is possibly the most difficult tasks in filmdom.  It goes double for Children Who Chase Lost Voices that must create two distinct worlds with their own set of rules, people, cultures, et. al.  The way that Shinkai creates these worlds and more importantly introduces them to the audience is a work of art in of itself. The entire narrative and how it is almost an anti-quest with Asuna trying to stop her companion from her world as it may mean the end of Agartha.

What elevates Shinkai’s film from other fantasies is its themes far outweigh the world and adventure.  Rather than the visuals being a means for an empty epic and a weightless “quest” narrative or a retread of the Campbell myth, the film goes elsewhere.  That elsewhere is done with so much heart, soul, and delicacy that even some of the greatest fantasies cannot muster.

Children Who Chase Lost Voices casts a beautiful spell with its dual worlds of wonder and danger.  The film feels as morally complex and intelligent as Princess Mononoke, which Children Who Chase Lost Voices feels a strong spiritual conviction with.  Though with Shinkai’s film finds its message through peace, love, and understanding.  Something that even Miyazaki could appreciate.

The transfers provided to Shout/GKIDS is a stunner.  The handsome sharp image’s main attraction is the color reproduction.  The film’s complex and beautiful visuals are a treat on Blu-Ray.  The transfer is near perfect without any issues of artifacting or ghosting.

The archival Audio Commentary with Makoto Shinkai And Staff begins with host Takayo Nishimura (character designer and animation director) introducing who is on the track including writer/director Shinkai, Art director Takumi Tanji, Music Composer Tenmon, Actress Hisako Kanemoto who plays Asuna.  Much like the Criterion Collection tracks of old, this is a group commentary track, but it never has overlapping comments.  The track is fairly technical and informative cutting the chase rather than a ponderous track.  Discussion of how certain visuals were achieved, where director Shinkai drew inspiration from, the musical compositions and where inspiration was drawn from, the voice work and performance, and much more.  Japanese with English Subtitles.  Note: the commentary is not found in the special features which is the case sometimes but in the SETUP menu.

Interviews With Staff And Cast (55:45) – this collection of archival interviews – done at the time of release in Japan – include comments by actors Hisako Kanemoto, Miyu Irino, Kazuhiko Inoue, and Director Shinkai.  Some of the questions that are prompted are discussion of characters, casting of the film, anecdotes about recording the film with director Shinkai, their impressions after watching the film for the first time, and much more.  Japanese with English Subtitles.

Making Of Featurette (45:23) – the archival making-of that was done at the time of the Japanese theatrical release is a deep dive into making this very special fantasy film.  Taking us from the early beginnings of the production, through every step of the production, and finally release and critical acclaim this is a truly great making-of.  The featurette is as thoughtful as the film is and a great companion piece.  The doc does feature some great behind-the-scenes footage, photographs, design work, et. al.  Anyone that’s even remotely interested in how this came about needs to see this.  Japanese with English Subtitles.

Japanese Promo Video (5:04) – is the music video for the main theme of the film “Hello Goodbye” performed by Anri Kumaki. Partially in English and Japanese with English Subtitles.

Works of Makoto Shinkai (12:58) – a wonderful collection of trailers for the work of writer/director Shinkai.  Before each trailer a title card is prompted giving you a brief background on the film itself, setting a wonderful context.  Even some of the bigger Shinkai fans in the US will want to take a look at the trailer package.  The Package includes; Voices from a Distant Star, The Places Promised in Our Youth, 5 Centimeters Per Second, Children Who Chase Lost Voices, The Garden of Words, Your Name, and Weathering With You.  Japanese with English Subtitles.

Children Who Chase Lost Voices is a beautiful fantasy epic about loss and grief. Shout/GKIDS have created another wonderful package for this Blu-Ray Release.  Highest Possible Recommendations!!!!