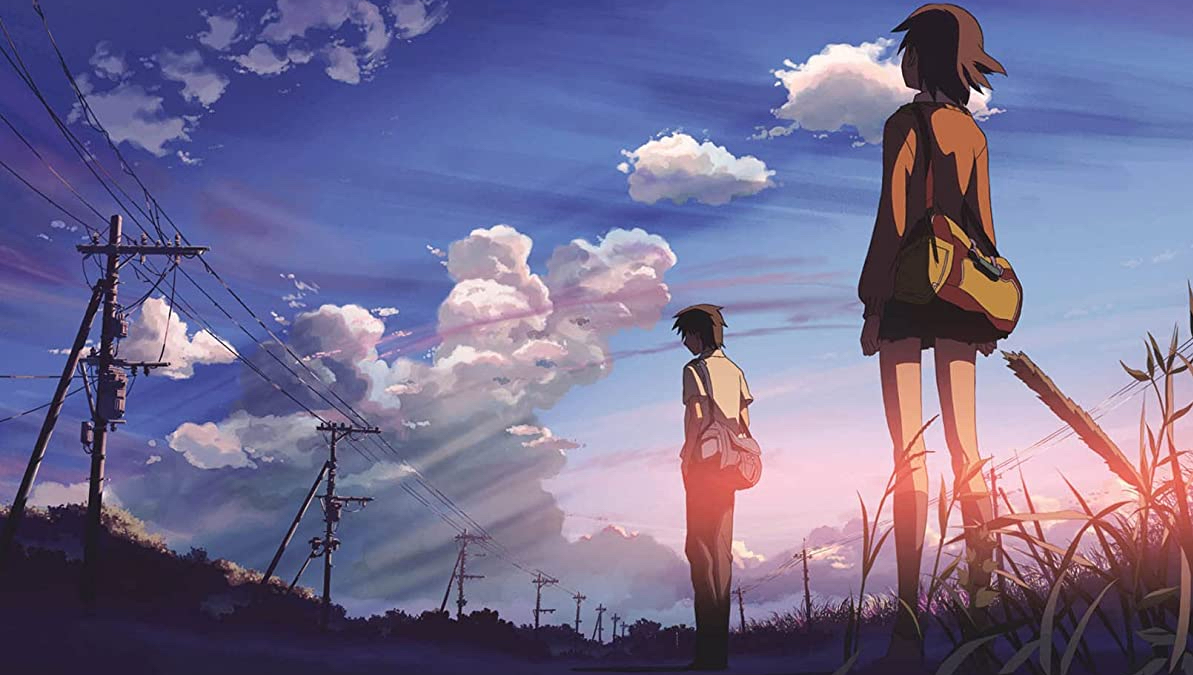 Your Name writer/director Makoto Shinkai’s earlier work comes to Blu-ray thanks to Shout Factory/GKIDS.  5 Centimeters Per Second is filled with thoughtful special features.

A collection of tone poems about the fragility of young love and the future.  Makoto Shinkai’s 5 Centimeters Per Second is a masterpiece in a minor key.

The lives of Takaki Tōno, Akari Shinohara, and Kanae Sumida intertwine the way that young unrequited loves often does.  Tōno is a boy who’s constantly moving, something he shares with Shinohara.  They bond early in their lives over common interests.  Though their time is for naught as Tōno moves.  As he moves leaving Shinohara’s love unsaid – both for that matter.  It is something that Sumida feels as she meets Tōno after his move as he begins his life over again.  Though Tōno still longs for Shinohara…

Though it feels complicated from the above plot threads, 5 Centimeters Per Second has a beautiful simplicity to its three narratives.  There is a truth to the way that everything plays out that writer/director Shinkai almost mutes the emotions.  They are there but their done with the subtly of a live-action film or a novella.

There is a strong spiritual kindship this film holds with the work of author Haruki Murakami (whose work was the basis for 2021’s transcendent Drive My Car).  That microcosm of heartache, emotion, sadness, and life swirls around characters as they feel like life is passing them by.  Both understand youth and the complications that arise with affairs of the heart that few films or works of art portray in such an adroit way.

Though the film is distinctly three shorter films the way that Shinkai links them through the way characters see not only themselves but each other adds to the delicate touch that permeates throughout the film.  Make no mistake though, as the ending connects each of the three films,

5 Centimeters Per Second will break your heart as it makes it soar.

The Transfer for 5 Centimeters Per Second provided to Shout Factory/GKIDS is a subtle work of art.  Like the film itself, the transfer’s in the smallest of details.  How it handles snow and cherry blossoms falling is a thing of magic keeping a clarity and sharpness without any traces of ghosting is a minor miracle.  This may be the best of the most recent releases with its color production and contrast levels near perfection.

Note: As they’ve included an entire film as a bonus feature they’ve also included bonus features for that feature film Voices Of A Distant Star.  I have separated the content above so you are able to know what goes with what.

Feature-Length Storyboards (63:24) – like previous GKIDS releases, they’ve included the full-length storyboards for the entire feature.  The work is rough but gives anyone interested in animation a look into Shinkai’s process as he draws all of the storyboards.  This feature can only play Japanese with English Subtitles.

Interview With Makoto Shinkai for 5 Centimeters per Second (36:33) – this archival interview with writer/director Shinkai done at the time of the original release is a vital piece as it gives context to the film.  The writer/director discusses the origins of the title, why he chose a series of “short stories” to tell a larger story, the casting process, the music and main theme song, the production methodology he took on this venture, and the production itself, and much more.   Shinkai is a thoughtful interview subject as he is a director, giving some great insight into this deeply personal film.  Japanese with English Subtitles.

Interview With Cast (37:20) – interviews with the Japanese voice cast Kenji Mizuhashi, Satomi Hanamura, Yoshimi Kondo, and Ayaka Onoue who portray the principal leads in the films.  Each interview which was filmed at the time of the original release in Japan covers similar questions regarding their character, working with director Shinkai, voice acting in general, their favorite moments from the film, their thoughts on the film, and more.  Each interview has a popup letting you know what the question the actor had been asked.  Japanese with English Subtitles.

Music Video (5:34) – the music video for the theme song, One More Time, One More Chance performed by Masayoshi Yamazaki. English and Japanese with English Subtitles.

Trailers (2:23) – one 30-second teaser and one 2-minute trailer. Japanese with English Subtitles.

Voices Of A Distant Star Film By Makoto Shinkai (24:46) – The first full narrative that Shinkai produced and it feels right at home with the director’s other work.  That is to say, that part of the beauty and artfulness of the film is how he is able to cunningly mash up the more meditative aspects of his work along with the more commercial aspects of the genres he’s working in.  The result is something electric.  As with any major artist, Shinkai’s film is not just an announcement but the seed of how the writer/director would eventually evolve, and continually evolve.  Note: the film was produced in SD and the disc has the SD version, which is the only version.  This has both English and Japanese dubs.

She And Her Cat Short Film By Makoto Shinkai (4:45) – One can see the origins of Shinkai’s style here in this black and white animated tone poem of sorts.  Note: the film was produced in SD and the disc has the SD version, which is the only version.  This short film can only play Japanese with English Subtitles.

Interview Makoto Shinkai on Voices of a Distant Star (8:33) – this shorter interview with the writer/director goes over the inception of the project, when he began the project, and how it evolved out of She and Her Cat, how he approaches directing, and more.  This fascinating interview gives insight into the younger Shinkai’s directorial style and how comparatively it’s changed since.  Japanese with English Subtitles.

Feature Length Storyboards [Voices of a Distant Star] (23:04) – Unlike the 5 Centimeters Per Second storyboard special feature has a lot more completed in this “storyboard” version of the film.  The version still does feature the storyboard work of Shinkai. This feature can only play Japanese with English Subtitles.