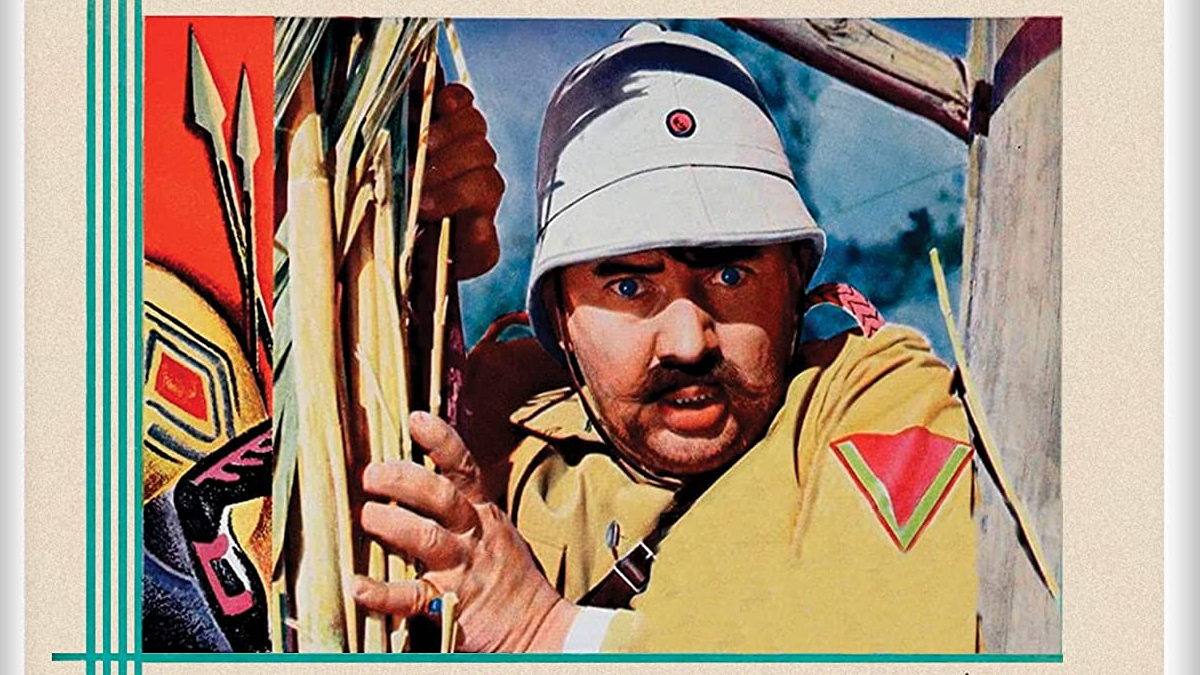 Mamba, one of the first Technicolor Talkies, thought lost since 1930, emerges from Australia.  Kino Lorber has released this recent discovery in a beautiful Blu-Ray package.

Note: Kino has included the following text at the beginning of the film;

This film contains racism and/or the mistreatment of people or cultures. Such depictions, in any era, are inexcusable. The film is being presented in its original form to bear witness to the history of racism in cinema, and to encourage a dialogue about how a future cinema can become more inclusive.

How does one watch a film?  Especially an older one with themes and visuals that would be considered culturally insensitive.  It is something that will grip a viewer of Mamba from the outset.  Never mind the bravado opening 2-minute tracking shot – which at the time – that’s staggering.  That tracking shot is filled with African slaves and white colonialists at their bay ready to strike.  What they saw as “the norm” we see as terrifying, and with ample reason.  Mamba though by either accident or purpose is at least understanding that what they are showing is wrong and that the people that are doing this are terrible human begins.

That terribleness is personified by August Botle (Jean Hersholt) the German landowner at the center of the film.  Botle is as evil as they come, and Mamba never relents on this notion.  Whether it’s raping Slaves, not helping the children he sired through rape, buying a young wife, whipping Slaves, and many other sorts of atrocious behavior.  Those acts are seen as genuinely terrifying in Mamba.

The crux of the film once the stage is set is a love triangle between Botle, his wife (Eleanor Boardman), and a German Office (Ralph Forbes).  Though it is perfunctory to the uprising that Botle’s murderous actions give windfall to.  This is where context and the aspects of the views and norms at the time take over.  Yes, Mamba does show the horrible behavior of white colonialists it does not escape the “faceless” people of color as cannon fodder.

Mamba is a vital piece of forgotten cinema and one that any cineaste should dive into but with fair warning that it is a piece of culturally insensitive piece of older cinema.  If one can move past this they will find Mamba to be a fascinating albeit troubling piece of cinematic history.

This restoration by UCLA Film and Television Archive is a major miracle.  A film that’s over 90 years old and locked away in Australia has been meticulously restored.  The results are a stunning artifact that will be preserved for the rest of time.  The image’s color reproduction is the attraction here.  The two-strip Technicolor film looks uniquely hypnotic with the colors almost pastel in hue.  There are of course signs of age but the restoration has taken care of most of the most troubling scratches (judging by the snippets you see in the special features).  Bravo to Kino and UCLA for bringing this to home video.

The all-new audio commentary by filmmaker Brian Trenchard-Smith.  The director begins by discussing his purpose and how he plans to discuss why the film is important and key to cinematic history even if it is problematic now.  Trenchard-Smith has a wonderful poetic track that discusses various aspects of the film such as the FX work done, the visual style, the sound work, historical aspects like colonialism, racism, Africa at the time of release and during the film, the use of German curse words, the stars of the film and their performances and characters, the screenwriters and writing of the film, missing scenes and scenes lifted from the film, the Australian censorship of the film (and why), the career and style of director Albert Rogell, the trouble with the production and lack of money because of the crash on Wall Street, some of the crazier problems and events that occurred because of the budgetary issues, the aspect of sexual assault via men’s perceived “marital rights”, the work and personal/professional history of star Jean Hersholt, and much more.  There are some silences but for the most part, Trenchard-Smith delivers a commentary track that’s not just deeply researched, informative, but witty, entertaining, and never shies away from the more troubling aspects of the film.

Interview with Paul Brennan (7:40) – is an all-new interview with Brenan from PTBSCREEN Australia.  The interview does open with a title card advising this interview is in part of a larger documentary called Splice Here: A Projected Odyssey and includes a teaser for the doc after the interview.  Brenan covers the background on Mamba (e.g. the production company’s rise, the production, and release of Mamba and how the prints ended up in Australia), the finding of the Technicolor Sync Sound print, and restoration of Mamba, and the rerelease of the film.

Theatre of Dreams (7:36) – a documentary short on Murray and Pat Matthews, the Australian film collectors who discovered the sole surviving print of Mamba.  Produced by PTBSCREEN Australia this wonderful documentary gives a bit more context on the two film print collectors that found Mamba in the 1950s. Some of the great tidbits are how no one really knew what the Matthews had until Paul Brennan got involved, the censors that cut the film, and much more.

Image Gallery (5:11) – is a collection of 32-stills and provides some vitally important info about the production including a great timeline of events including their finding of the elements and restoration.  The gallery can be navigated through with your remote’s next and back buttons or run automatically.

Mamba is a vital piece of forgotten cinematic history that deserves to be rediscovered.  Kino Classics has put together a thoughtful disc and supplements to complement the film.  HIGH RECOMMENDATIONS.

Kino Classics Blu-ray Edition of Mamba is out now