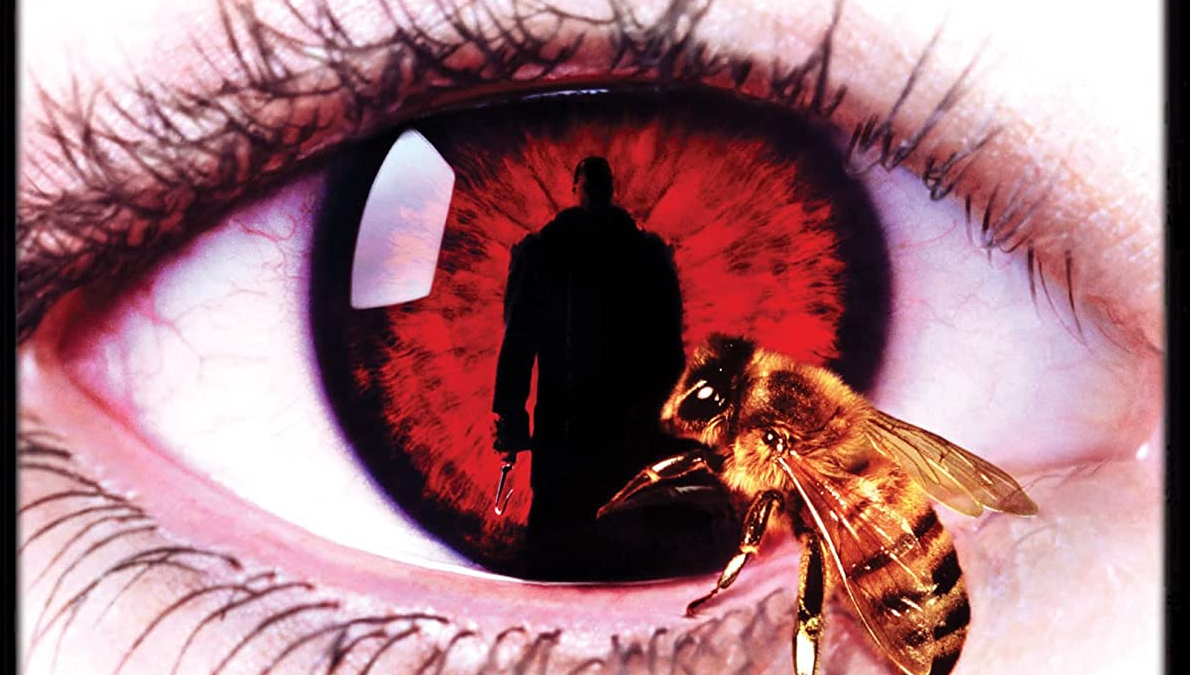 Leave it to Scream Factory upgrade their already wonderful Candyman home video release with a superior 4K UHD Upgrade.  Bringing along all the previous extras and sporting a new Dolby Vision Encoded transfer and a new Atmos track to boot.

Helen (Virginia Madsen) while writing her thesis paper on Urban Legends stumbles upon the terrible and horrifying story of Candyman (Tony Todd).  Daniel Robitaille was an educated, rich, free black artist who in 1890 sired a child with a white woman. That was the cause of his mutilation and death at the hands of men hired by the white woman’s father.  That death and mutilation were so horrifying Robitaille’s soul never rested and became a spirit of anger and vengeance in what turned out to be the South Side of Chicago.  Hearing this story Helen immediately begins to investigate.  What appears to be a simple legend is anything but as Helen is sent down the rabbit hole, losing everything in the process, all in finding out the truth about Candyman.

The film is an adaptation of Clive Barker’s short story The Forbidden that adroitly transplants the story from the UK to the South Side of Chicago.  Writer/Director Bernard Rose is just as concerned with the set pieces as he is with the social themes of race, sex, and classism.  Rose’s film makes no qualms that it has other things on its mind than shocking or scaring an audience.  Though it does both with style and flair, Candyman is more concerned with race and class.

It is no mistake the film is about an affluent woman encroaching on spaces that everyone including the Black Citizens of said spaces has told her to stay away from. Even when the boogie man himself, the harbinger of racism incarnate, Candyman does finally appear to her, she continues to tempt fate.  By that time Helen has realized what she has done, and the cost of it, it is too late.  Candyman will get his pound of flesh and more.

By its end, Candyman boldly states its case of whom or what is to blame.  Candyman, though he commits atrocities, is not the true monster.  Through a baptism by fire, it is revealed that Helen is the true monster.  Her affluence and entitlement blinding her to the crimes she has perpetrated.  Attempting to take away and reveal myth, appropriating the pain of the Black Community for her own benefit and gain.  The final moments find the camera roaming the burnt remains of the apartments that Candyman has haunted.  His image once adorned brightly on the walls drawn in graffiti is now gone.  In his place is the white devil, Helen as faintly echoed Candyman says, a recall from an early refrain “it was always you Helen”. Though this is not a refrain, but rather an indictment of Helen and everyone just like her using others’ pain as a commodity.

The new 4K Master of the Original Negative, Supervised and Approved By Writer/Director Bernard Rose And Director Of Photography Anthony B. Richmond (Theatrical Cut) By Arrow Video.  BUT… Includes a 4K UHD Presentation in Dolby Vision (HDR10 Compatible) of Both Cuts Of The Film, The Theatrical R-rated Version And The Unrated Version Featuring Alternate, More Graphic Footage, Presented Via Seamless Branching.  This new iteration of the Arrow Video 4K Master is beautiful and an upgrade from the Blu-ray in every way.  I had previously discussed the Blu-Ray iteration and discussed the contrast and black levels being near perfect.  These levels are perfect now.  As I’ve discussed before UHD discs are never about sharpness but about contrast and color reproduction accuracy.  Everything about the transfer is deeper.  The contrast and color spectrum in particular are wider with more complexities than the previous Blu-ray.  For a film that primarily takes place in dark spaces, this makes for an even better experience than their first release.

Writer/Director Bernard Rose and actor Tony Todd is a great conversation between the actor and writer-director talking about the film.  Both have immense love for the film and each other as artists.  The discussion covers a range of topics from casting, production, themes, and preparation. The entire track is a relaxed affair.

Authors Stephen Jones and Kim Newman is a critic’s commentary where Jones and Newman, as they have on other horror titles, dissect the film’s preproduction, production, post-production, and critical life.  It’s a fascinating albeit a bit dry commentary filled with a wealth of knowledge.

Director Bernard Rose, Author Clive Barker, Producer Alan Poul, Actors Tony Todd, Virginia Madsen, and Kasi Lemmons is an archival commentary from the 2004 DVD special edition release.  The commentators are edited together much like an old-school Criterion commentary.  As it is a pastiche of comments much of the information is edited to be scene specific rather than a normal commentary.

Bernard Rose, Moderated By The Movie Crypt’s Adam Green and Joe Lynch those that have followed the great Podcast The Movie Crypt will already be familiar with this one.  Scream did everyone a huge service by procuring this commentary.  Green and Lynch, both directors if you were not aware, discuss with Rose the making of, history, and personal reflections on all things Candyman.  This could be dubbed a “fan commentary” but as anyone that will listen to this commentary will find out it is much more polished and refined than your typical “fan commentary”.

Sweets To The Sweet: The Candyman Mythos is an archival 24-minute featurette that discusses the Urban Legend of Candyman featuring interviews with Writer/Director Bernard Rose, Executive Producer Clive Barker, actors Virginia Madsen, Tony Todd, and Kasi Lemmons.  It does not talk about the actual production but discussing the larger socio implications of the film is as equally enriching to the film.

Interview With Actor Tony Todd filmed in 2014 is a 7-minute discussion with Todd about the film Candyman and the role.

Bernard Rose Storyboards is not just the director’s own hand-drawn storyboards but a 5-minute featurette set to Phillip Glass’ beautiful score filming various storyboards from different set pieces in the film.

Trailer and TV spots are worth watching for the very fact that the Trailers and TV Spots don’t give any kind of indication of the sort of complex and subtle horror the film is.

The Still gallery is filled with some great publicity shots and posters from various countries.

The original script after review is quite a beautiful document.

Be My Victim is a new 10-minute interview with actor Tony Todd in a very honest discussion of his casting, the film, the sociological aspects of the film, discussing Lon Cheney as an inspiration, the gothic love story within the film, his upbringing informing his work, and much much more.

It Was Always You, Helen is a new 13-minute interview with Virginia Madden about her casting in Candyman, stepping into the role of Helen after another actress dropped out, her allowing Rose to hypnotize her for certain scenes, and more.

The Writing On The Wall: The Production Design Of Candyman is a new 6-minute discussion with Jane Ann Stewart about the production design of Candyman. Stewart discusses how they got Katherine Stewart who was the set decorator from I’m gonna git you Sucka, the challenges of the production design with the realities of shooting in the infamous Cabrini Greens projects.

Forbidden Flesh: The Makeup FX Of Candyman is a new 8-minute interview with FX Crew Bob Keen, Mark Coulier, and Gary Tunnicliffe. The group discusses the intricacies of creating feces, the iconic hook, and how the blacksmith who they hired decided to not sell it to them because he thought they were spawns of satan for making the film. It’s a great look back at the specifics it took to create the iconic FX of Candyman.

A Story To Tell: Clive Barker’s The Forbidden is a new 18-minute interview with author and critic Douglas E. Winter discussing how Clive Barker came to the attention of the Horror community, and where The Forbidden the source material which Candyman is based on connects to the larger career of Barker as an artist.

Urban Legend: Unwrapping Candyman is a 20-minute critical analysis with Professor & Critic Tananarive Due and Author Steven Barnes who run a classic that is Black Genre Film course specifically looking at horror films. They discuss the social relevance of the film and how the film though progressive is told from the White point of view. They also discuss the 90’s as being a renaissance for Black cinema. Due and Barnes do a great job of giving further context for where Candyman is within film history.

Reflection In The Mirror is a new 10-minute interview with Kasi Lemmons discussing her supporting role in the film.

A Kid In Candyman is a new 14-minute interview with Dejuan Guy who played Jake, the child who discusses Candyman with Helen in the film.

Scream Factory has updated their collector’s edition of Candyman to 4K UHD retaining all the special features and giving the transfer and audio a new coat of paint with Dolby Vision and Atmos encoding.  HIGHEST POSSIBLE RECOMMENDATIONS!!!!

Note: Some of this review appeared in the Blu-Ray edition released by Scream Factory in 2018.