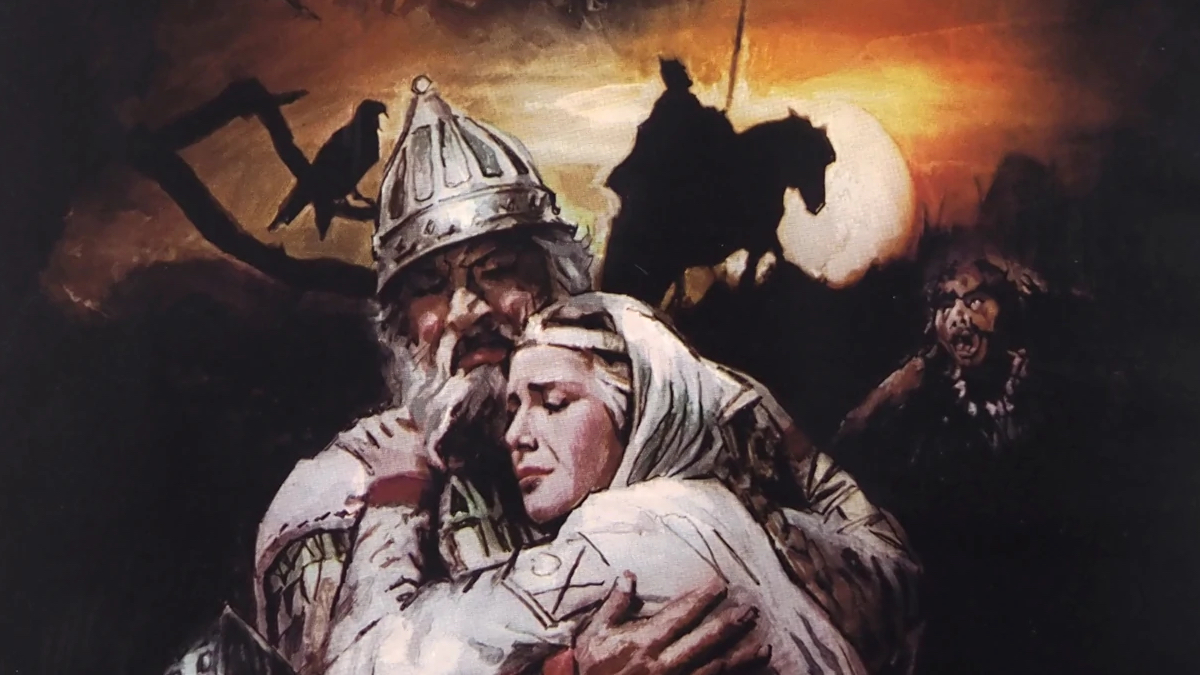 The fine folks at Deaf Crocodile have done it again bringing to Blu-Ray a vital piece of World Genre Cinema that is a must-see for a cineaste, the Epic Ilya Muromets.

Damn, sometimes a film just hits a sweet spot.  I have a particular fondness for world genre cinema.  Especially, those that are steeped in a country’s myths and legends.  It is no surprise to this reviewer that this particular epic directed by legendary Russian Director Aleksandr Ptushko hit the spot.

Ilya Muromets is based on the old Russian oral Epic Poems about a knight of the same name.  The film recounts the legend of Muromets a knight sent on an errand to the capital of Kiev to help its people rid them of the invading Tugars.  Though the Tugars have already begun their treacherous plan of crumbling the capital from the inside out.  Muromets fights valiantly though is imprisoned by the same people that he would protect.  As the years go by the Tugars plan their ultimate assault on Kiev.  Little do the Tugars and Tsar Kalin know even their three-headed dragon is no match for Muromets and the people of Kiev.

Simply put Ilya Muromets is a film overwrought with visuals that stun.  Director Ptuskhko’s film is almost indescribable in its execution and scope.  It does in 90-minutes what most epics attempt to do at twice the runtime and half as successfully.  There is a specificity to everything that the director does in his film that feels both dense and accessible.  It’s as though the visual grandeur of Walt Disney, David Lean, and Mario Bava created a bastard child, and sent it back into the past to Soviet Russia.

Yes, one can see that like any piece of genre cinema it is a subterfuge for ideology.  There are moments of propaganda but … one can see the place and setting from the above plot description and transform those ideals for a more updated ideology.  It should be more fascinating than troubling as it gives one a window into an era of time almost seven decades prior.  Part of the power of Ilya Muromets – and any great fantasy for that matter – is that it can be taken as a rousing adventure or something else.

Ilya Muromets is a child’s knightly adventure as much as it’s a political thriller as much as it’s a romance as much as it’s a fantasy epic.  It is a heady brew and concoction that one must see to believe.  One that ends with a fight with a three-headed dragon that would make any fan of early-era Godzilla or Kaiju films stand up and cheer.

This digital restoration done by Mosfilm Cinema Concern is gorgeous.  The widescreen cinematography is outright stunning.  The sharp handsome image is flawless in its reproduction of the 35mm cinemascope.  There isn’t a single scratch or image defect present.  Mosfilm has taken the time and detail to produce a stunning glowing transfer that translates to a reference quality Blu-Ray edition.

The Commentary by author, cartoonist, and film historian Stephen R Bissette opens by discussing his credentials and specifically his love and teachings about Ptushko’s work.  Some of the details include Ptushko’s film is the first color widescreen venture in Soviet Era Russia, Ptushko was the first in the world to create an animation/live action hybrid, the filmmaker’s reference of fellow Soviet Filmmaker Alexander Rou, the real-life Ilya Muromets, the work of Ptushko’s films and filmography, the blending of multiple epic poems into this film, the massive amount of work done to create this epic, the lack of information about the film at the time of release and over the decades, the staggering musical sequence of spinning the magical cloth, the work that went into building the dragon in the third act, some great quotes directly from the press book given to various press and markets to help promote the film’s US release, the awkward storytelling, more quotes from Box Office Magazine and exporting/importing films from post-WW2/Cold War era, how some of the staggering vista shots were achieved, and much more.  Bissette’s informative, deeply researched, and entertaining track is a vital companion piece to this truly amazing film.

Note: Also included is a beautiful booklet with an essay by Dennis Bartok about Russian Film Scholar Alan Upchurch AND … reproductions of two of Upchurch’s essays on Russian ‘Fantastika’ Cinema and director Ptushko. This booklet absolutely is a vital part of the package and MUST be read, one would prefer before watching the film.

Ilya Muromets is a staggering visual epic that deserves to be discovered.  Highest Possible Recommendations!!!