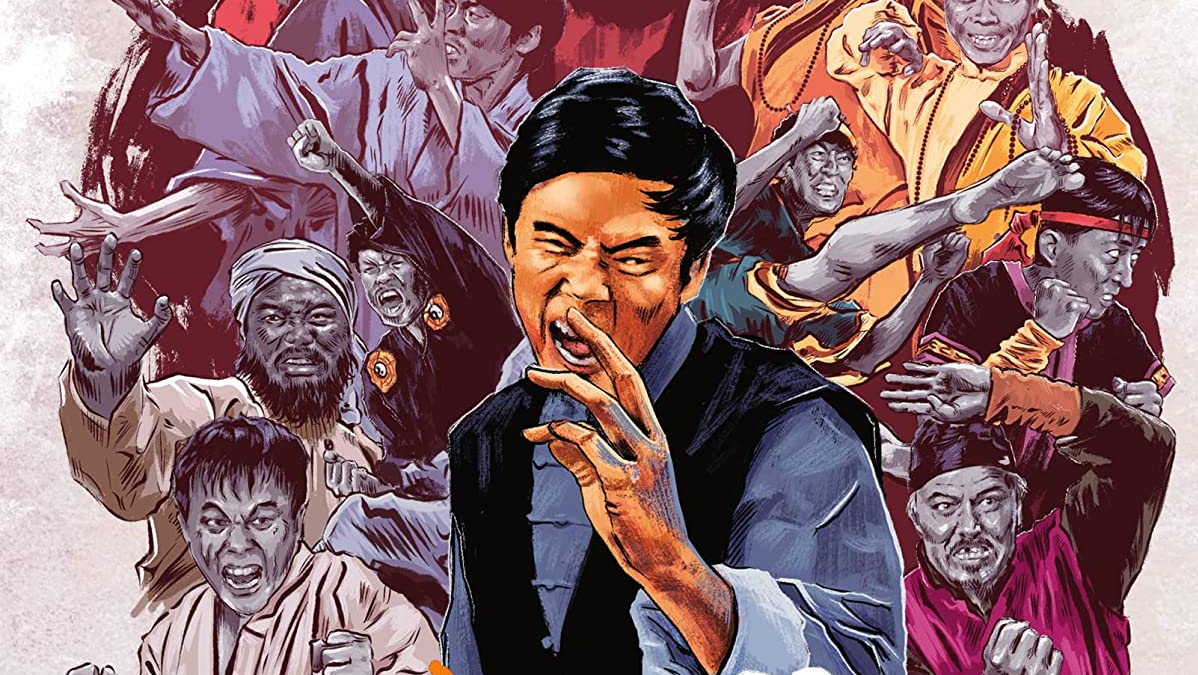 The fine folks at Arrow Video have continued their dive into the world of Classic Martial Arts films on Blu-Ray with the legendary and lunatic One-Armed Boxer written, directed, and staring legend Wang Yu!

I have a specific laugh.  My sister will tell you that I’ve had it since we were kids.  It’s a laugh that rivals Robert DeNiro’s in Cape Fear.  Or so I’ve been told.  The laugh itself comes out when I find something so pleasing to my particular palette in cinema.  It honestly comes from the years of sitting with my grandfather who was a liberal day drinker.

We sat on the couch on a Saturday or Sunday afternoon watching whatever KCOP had on their Million Dollar Movie.  That meant mostly Italian Westerns, 70s Crime Films (usually Eurotrash starring dudes name Helmut or Franco), and Martial Arts Films.  It was the last that would have us in stitches.  It wasn’t that they were bad.  Well, some were but we didn’t laugh at those.  It was the films that pushed the crazy to the Spinal Tap “11” frenzy.

There were three films that I will always remember that my grandfather and I laughed (yes that psychotic laugh) through so much that our bellies hurt.

They Call Me Trinity (Gramps was a huge Bud Spencer fan)

I say all this because there isn’t a way for me to truly review this film with any sort of distance or critical eye.  Since Childhood, this film has been a ramped-up piece of badass action myth-making that even now at 44 years old makes me laugh my Cape Fear laugh.

The film is a fairly straightforward affair with two Martial Arts houses waring against one another. One good.  One bad.  The bad house seizes on a moment of reckless youth by Yu Tien Lung (Wang Yu) to take control of the province.  To what end?  Drugs, of course.  The melee that ensues leaves Yu Tien Lung with only one arm and left for dead.  It is through the kindness of another Kung-Fu master and his daughter that Yu Tien Lung is nursed back to health.  Once healthy Yu Tien Lung is given a potion that gives his hand incredible strength and resilience in order to get his vengeance.

You’ll never know you needed to see actions played out with a one-armed man kicking ass until you see One-Armed Boxer.  There is this free-form manic energy that the film is approached with that is undeniably entertaining.  Wang Yu aka Jimmy Yang Yu knows exactly the type of film he is making.  There isn’t any shame or embarrassment in the overwrought nature of the film.  It exists solely to entertain and entertain to an almost comical level.

One-Armed Boxer is comical in both the Comic Book stylistic way and in the comedic entertaining way.  The way that the film is able to blend both the grandiose and the grounded is the charm and the magic of this 93-minute grindhouse classic.  So, crack open a beer or six (if that’s your thing).  Relax and prepare for your – figurative – ass to be kicked.

The 2K restoration from the original elements by Fortune Star is stunning.  There are a few optical elements (mainly the opening freeze frame opening and a montage in freeze frame specifically) that do not show age but the faultiness of the optical process.  It isn’t graded against the transfer itself.  Other than those minor defects the transfer is a gorgeous restoration with the image consistently sharp with a beautifully filmic look.  Arrow has brought this transfer to life on Blu-Ray.

The all-new Audio Commentary by Frank Djeng from the NY Asian Film Festival is another winner from Critic and Historian.  Djeng begins with the opening sequence and the release credentials for this truly great film.  Some of the details include the various cultural touchstones like Bird Houses during the era this takes place, the music composer and his habit of stealing from a very famous themes, the importance of respect and cultural aspects like punishment and bowing, a discussion of why Shaw Brothers [though this is a Golden Harvest film] did movies in Mandarin and not Cantonese, the sound design and how it evolved and changed from this era, the martial arts style and how the film is shot that mirrors a lot of how Shaw Brothers shot films, the life and times of Wang Yu and how he began and achieved stardom, the connections to The Master of the Flying Guillotine (as it was a semi-sequel to One-Armed Boxer), the difficulty performing Wang Yu had with having his right (dominant) hand tied up, the various names that One-Armed Boxer and the retitling of Martial Arts films in general, how Bruce Lee changed Martial Arts Films from Hong Kong, the nationalism and anti-Japanese sentiments in this film and many other Martial Arts films of the era (its only about thirty years after the Japanese Occuptation of China), a discussion of various actors that inhabit the roles and a discussion their work when info is available (Djeng explains that many of these actors are Taiwanese and information has been lost), a discussion of the various weapons and martial arts used in the film, an account of the colorful and lively personal life of Wang Yu (including a very famous Jackie Chan story) and much more.  Similar to his work on Shaolin Mantis and Legendary Weapons of China Djeng’s commentary track is deeply researched, highly personal, informative, and very entertaining.

Career retrospective interview with Wang Yu, filmed in Nantes in 2001 and never released before, courtesy of the Frédéric Ambroisine Video Archive (41:16) – At the outset, Arrow does say that there are issues with the audio of the interview.  Please note that having watched it, yes there are some but on the whole one can watch this interview without issue.  Wang Yu discusses how he began as a water polo player and swimmer and how after a year-long suspension from water polo led to his audition with Shaw Brothers led to being picked.  The interview is fascinating as Wang Yu discusses things like his first film (Tiger Boy), how his education included martial arts in his early years, his first huge hit (The One-Armed Swordsman), and the production and difficulties (left handed swordplay when he was right handed), working with legendary directors Lau Kar-Leung and Cheng Cheh, his immigration to Taiwan, his work in Taiwan and transition into direction, the influence of Japanese cinema and working on Zatoichi, the difference between King Hsu school in Shaw Brothers and Cheng Cheh school in Shaw Brothers in the studio system, working on One-Armed Boxer, and much more.  In English.

Trailer gallery – This is the goldmine of awesomeness.  Arrow Video has wisely included a trailer package from the most legendary of Wang Yu’s films.  A package that is better experienced than told what they are.  One wishes Arrow Video had come up with a ‘GRINDHOUSE’ Playable feature that played these trailers at random before the film.

Image gallery – 71 various production stills, lobby cards, Newspaper Ads, Posters from various countries, and the alternate titles they came under.  The Gallery can be navigated with your remote control’s Next and Back Chapter Stops.