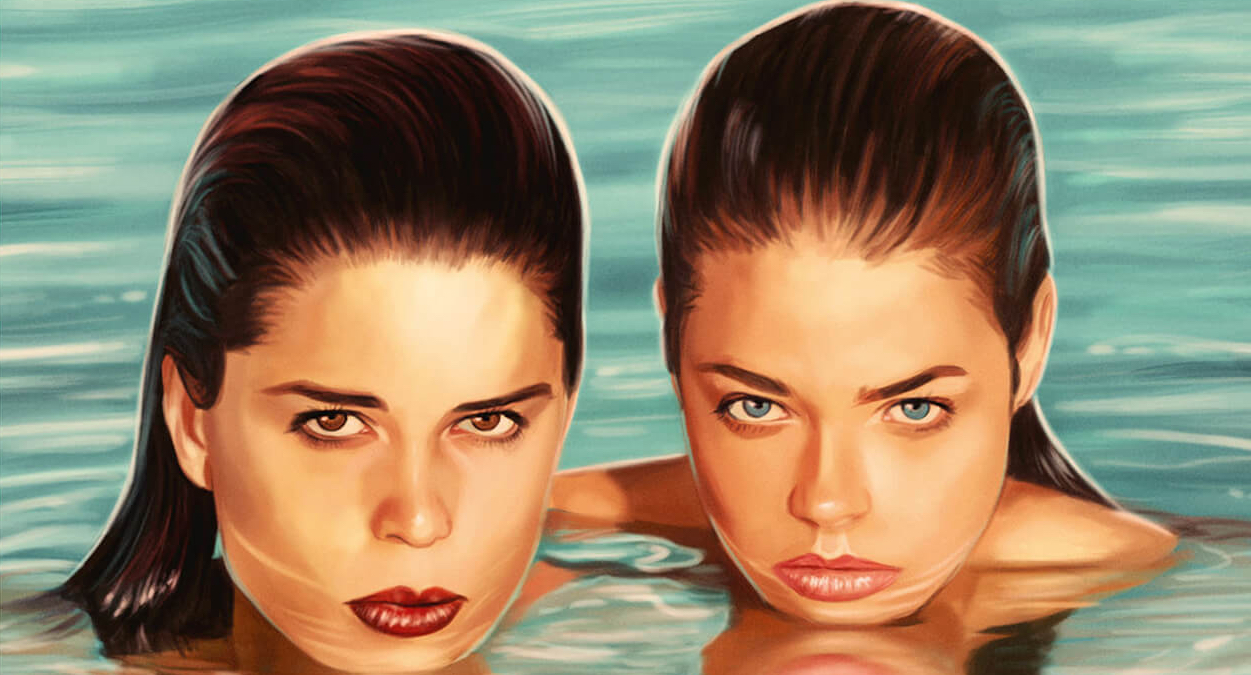 Film Noir always should cross lines.  We often forget that the Noir from the 30s, 40s, and 50s were always breaking conventions.  It makes sense that the director of HENRY PORTRAIT OF A SERIAL KILLER’s first glossy Studio Produced picture would be something like Wild Things.  Henry even thirty years later is a harrowing transcendent piece of filmmaking that leaves you shaken for days post-viewing.

Wild Things feels like exactly what you want out of a Florida Noir.  The grime and dirt permeating even the lush estates of the wealthy is the sort of overwrought greed, crime, and violence that swirls through desperate people’s minds.  Double Crossing is as commonplace as the Triple Cross.  Director John McNaughton understands all of this and delivers everything with a sly wit and thick layer of overwrought sexuality that makes this one a winner.

Part of the reason why Wild Things is such adroit entertainment is because of the intelligent casting of the film.  So well-cast that many of the actors were stuck in similar roles for a good part of their careers.  Specifically, Denise Richards is flat-out amazing here as the rich bratty teen who accuses her teacher of sexual assault.  Richards would end up floundering after the one-two combo of this and Starship Troopers (not even six months earlier). Not for any other reason that Hollywood could never figure out how to effectively use her as McNaughton and Verhoeven did.

Just as game as Richards is Neve Campbell who always found interesting projects between her starring in Scream Films.  Campbell takes the cliché of the “mysterious trouble goth teen” and how the script subverts them just enough.  Though like Richards, Campbell is working overtime in this film to elevate it.

The New 4K restorations of both the Original Theatrical Version and the Unrated Edition from the original camera negatives by Sony Pictures Entertainment is a standout.  The film shot on 35mm by Jeffery L. Kimball makes its way to 4K with a new Dolby Vision encoding.  The luster and shimmer that the image produces is as good as anything out there on UHD.  The image is sharp but more than that its color reproduction and contrast levels are reference levels.  Though McNaughton and Kimball shoot Florida as a seedy, muggy, swamp that doesn’t mean there aren’t the neon-and-pastel hues throughout.  The variances and how the transfer handles them with no issues retaining consistency is what makes this night-and-day difference between the initial Blu-Ray release and Arrow’s edition.

The first commentary track is an all-new one by director John McNaughton and producer Steven A. Jones.  McNaughton and Jones begin the track by discussing the opening title sequence and some humorous notes about the pilot who helped achieved the visuals.  Some of the details include the cost of using the rich elite private school they shot at, the alternate title for the film in Europe, shooting in true anamorphic widescreen, Theresa Russell’s audition to get the part in the film, the casting of Bill Murray and his relationship with McNaughton (he directed the elusive actor on Mad Dog and Glory), a “production” gator that got loose, working with Jeffery Kimball, and much more. There are a lot of silences in the track and some overlap from the archival commentary track but there’s more than enough in the track to definitely worth listening.  NOTE: this track plays over the THEATRICAL and not the UNRATED cut of the film.

The second commentary is an archival one from the original DVD release featuring director McNaughton, cinematographer Jeffrey Kimball, producers Jones and Rodney Liber, editor Elena Maganini, and score composer George S. Clinton. This is a true-blue group commentary track with all participants in the same room.  Kimball does join but not until later in the track.  The track is actually a fairly low-key affair with people hardly talking over one another.  There is definitely a lot of production-minded technical information that is doled out over the course of the track.  There is a lot of discussion on what’s on screen but it’s never “describing” but rather giving out production anecdotes.  There is a decent amount of silence that happens during the course of the track.  This has always been an entertaining and fairly informative track and has not changed in the 25+ years since its release.  NOTE: this track plays over the THEATRICAL and not the UNRATED cut of the film.

John McNaughton on Wild Things (26:20) – an all-new interview with director McNaughton.  The director discusses how he got the script because he was looking for a more commercial project, the rewriting of the script to tweak the script a bit more “plausible”, working with producer Jon Peters, their time in South Florida for research and preproduction, how location is very important in any film to McNaughton, a side conversation about his underrated Mad Dog and Glory, Kevin Bacon’s nudity in the film and how it came about, a discussion of how the sex scenes really are produced in reality, working with the casting director to fill the cast out, discussion of the various cast members including Kevin Bacon being the first committing to the cast, and much more.

Denise Richards On Wild Things (14:04) – an all-new interview with star Richards.  The actress discussed how she got the part, the script, the nudity and sexuality in the role, how she approached the role with empathy, working through the challenges with her mother before accepting the role, the negotiation of what was going to be shown, and what wasn’t, how Robert Downey Jr was originally cast in the Matt Dillon role, and much more.

Onset Interviews (4:18) – a vintage EPK-style making-of including the “trailer guy” voiceover which made this reviewer laugh when mentioning Murray as a “low rent lawyer”.  Features comments by McNaughton, Bacon, Campbell, Dillon, Richards, and others.

Still Gallery – consists of 45-production stills.  The gallery can be navigated by using your Next and Back Chapter stop buttons on your remote.