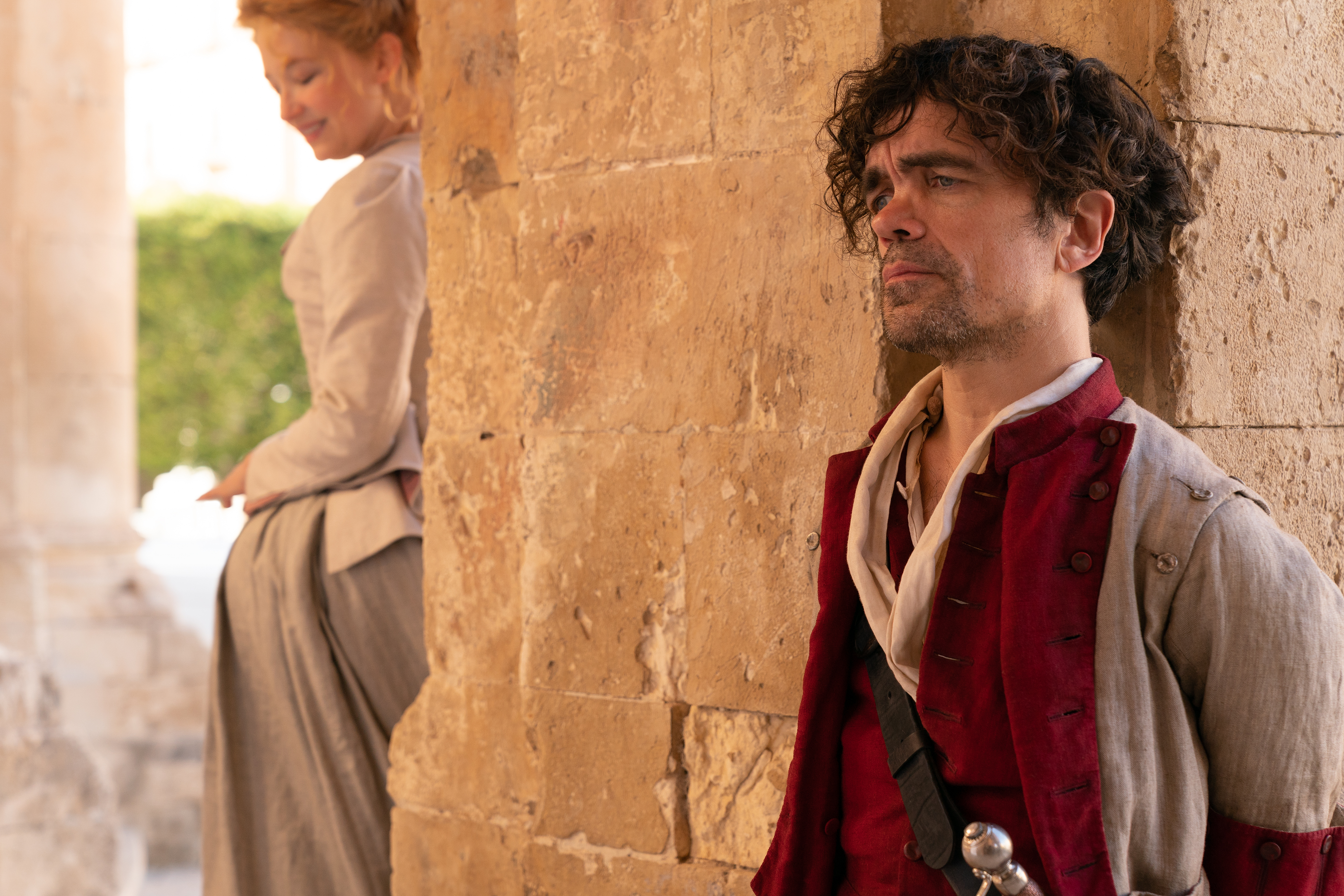 Peter Dinklage is center stage in the updated musical version of Cyrano de Bergerac (with music and lyrics by The National) simply titled, Cyrano.

Director Joe Wright and Screenwriter Erica Schmidt make all the right choices when adapting the stage musical Cyrano (based on Schmidt’s own playbook).  Beautifully photographed in Sicily, it is the perfect backdrop for the romantic musical. Schmidt’s adaptation of her own work with music by Aaron Dessner, Bryce Dessner, Matt Berninger, Carin Besser also known as The National, leans out the story to reconfigure it for a modern age.  One gets a film that is intimate in setting but epic in emotions.

Any adaptation of this story rests on the shoulders of Cyrano and Roxanne.  Here Peter Dinklage and Haley Bennett (who were the original stage actors) are perfect as they are star-crossed.  Their chemistry works in the film’s most intimate moments.

Bennet as Roxanne is both fiercely intelligent and playful, as we have seen in the best of the adaptations along with the youthful innocence and reckless immaturity.  Roxanne is neither victim nor prize in this adaptation and in Bennet’s interpterion.  Rather she is a woman of circumstance that does not allow that to define her.  Roxanne is in love with words as much as she is with visual beauty.  This never seems like a point of critique.

Dinklage continues to prove why he is one of the best actors working today.  His Cyrano is a full course meal of a performance.  Heroic.  Cowardly.  Passionate.  Fearful.  Prideful.  Intelligent.  Witty.  The tragic hero has come in many forms, but Dinklage’s Cyrano painfully wears his pride and ego on his sleeve as naked as he wears his heart.  Heroic enough to take on ten men in the middle of the night.  Though unable to confess his love to the only one that would understand. It would be all enough if Dinklage’s performance was only these things but to add the music…

The personification of music and figure have never better perfectly matched as it does when Dinklage sings during the movie.  There’s ache and timbre in every musical note the actor performs.  That ache and timber pierces one soul as Dinklage sings in the standout moment, knowing he’s lost, Roxanne.  It’s a performance that elevates the entire film beyond even its minor imperfections.  One that elevates everyone involved to be better.

What Cyrano does best is what the music of The National does.  Perfectly breaks your heart and soul into a million little pieces only to put it back together to break it all over again.  Cyrano in its final moments captures grace between the possibility of love and the aching realization of the loss of love that only music can bring to us.  In those final moments, Cyrano soars with the kind of romantic revelry we rarely get in cinema.  Both sad, wonderful, and altogether ravishing.