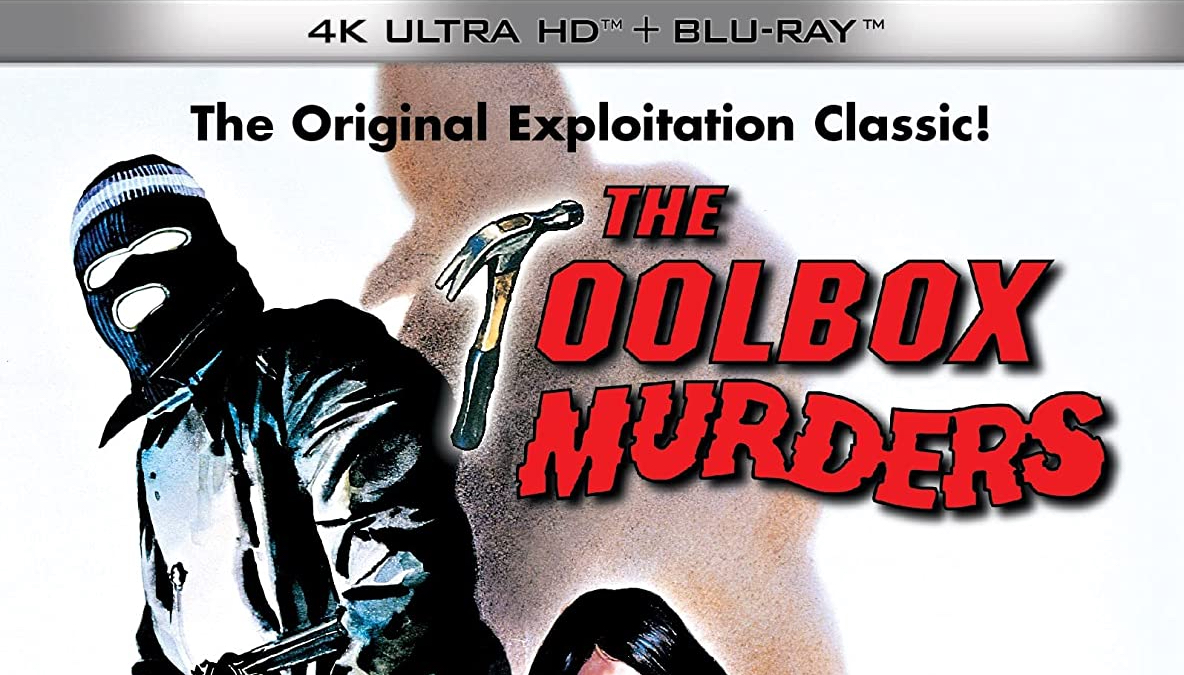 The mad geniuses at Blue Underground have done it again.  An amazing 4K UHD disc for grindhouse classic The Toolbox Murders encoded with Dolby Vision and Atmos and a tool chest filled with new extras.

There is something strangely modern about The Toolbox Murders.  The slow and methodical way that it plays things out.  The way that the violence though shocking but also appropriately so.  Though it makes a case for both being exploitative and effectively responsible.

Taking place over a few days in the San Fernando Valley in the 1960s.  Women are killed and kidnapped by a masked killer.  Police are apathetic, to say the least, and literally bumbling idiots that would rather hit on a victim’s mother than do their job.  The only person that seems to be concerned for a missing girl Laurie (Pamelyn Ferdin) is her brother Joey (Nicholas Beauvy).  Joey with the help of Kent (Wesley Eure) they begin to look for his sister and the killer who may be closer than they think.

The slasher tropes are present in The Toolbox Murders.  They haven’t been solidified at this time circa 1978.  It allows for a strange tonal and storytelling vibe the permeates throughout the runtime.  The cliches we see in these types of films now are sometimes here but presented in a way that we don’t normally see them.  Like the confluence of Giallo, proto-slasher/horror films of the mid-1970s all swirl around director Dennis Donnelly’s film.

The Toolbox Murders was filming around the same time as Halloween and feels every bit of it.  This film could have taken place in the same universe, maybe a few months before the Carpenter classic.  They share some of the same true-crime events that inspired their films, how the “kills” are shot in the killer’s POV, even their heroine’s name in common.  Though Halloween is tame by comparison with its use of sexuality and violence.

Think of The Toolbox Murders as Halloween’s sleazier older cousin.

The UHD boasts the world premiere of the New 4K 16-Bit Restoration from the uncut original negative.  Blue Underground’s restoration work here is positively amazing.  Much like their work on Dead and Buried the image here is meant to mirror the source which is a bit darker.  The image though dark retains that filmic glow that’s rarely seen in any video transfer until the rise of UHD.  The Dolby Vision allows for deeper contrast and black levels.  The fact that UHD doesn’t necessarily make things sharper as it does deepen the color spectrum and giving us a more accurate image that retains the liquidity of a film print is technological magic that this reviewer feels Blue Underground more than any other Boutique label. I still stand by my assertion that New Line should give them the UHD rights to Fincher’s Seven.  Their work continues to be truly next level.

The first Audio Commentary is an archival one featuring Producer Tony DiDio, Director of Photography Gary Graver, and Star Pamelyn Ferdin.  Some of the details how The Texas Chainsaw Massacre and a real-life incident in the San Fernando Valley that inspired the film, how Ferdin was cast, the shooting style Graver adopted, how Didio found director Donnelly, working with star Cameron Mitchell, Didio’s surprise that the cult fandom that had begun to surround the film, Ferdin’s and Graver’s experience with fans of the film, filming in the San Fernando Valley, the infamous nail gun scenes, the fact that many of the cast and crew have not seen Donnelly since the production, the controversy post-release and even after, Stephen King’s love of the film, and much more.

The second track is an all-new Audio Commentary track featuring Film Historians Troy Howarth and Nathaniel Thompson.  Howarth and Thompson bring their patented deeply researched and entertaining on this “Giallia filmed in the Valley” as Thompson says during the opening.  Some of the details include the work of some of the actors and crew in adult films, the various locations and how they haven’t been updated in the 40 years, the rise of the serial killer at the time and their portrayal on screen, the critique of the film misogynistic, the female writers, the film’s rating and the ratings boards at the time and how arbitrary things can be using other examples, Thompson’s personal connection to this home video release, Howarth’s hesitance seeing the film until DVD, the shooting and filmmaking style, The Texas Chainsaw Massacre influence on this film, the Tobe Hooper “remake” of the film, the work of Cameron Mitchell in this film and elsewhere on TV and Film, the infamous nail gun scene, the work and history of Pamelyn Ferdin, the career of Derek Donnelly, Crown Productions and other films they produced, the work of Wesley Eure, the work of Nicholas Bovy, a discussion of slasher films and how this film fits into that varied subgenre, the difference between east coast and west coast slashers/horror films, the work of cinematographer of Gary Graver including a crazy rumor about his work in the Adult Industry and Orson Welles, the box office success abroad, the location in the west hills in the San Fernando Valley, and much more.  Another great track from Horwarth and Thompson as they deliver an informational deeply researched commentary track.

Drill Sergeant – Interview with Director Dennis Donnelly (20:17) – in this all-new interview with director Donnelly discusses his career before the film in Television and more.  Some of the details include how he was hired on The Toolbox Murders, how the film came together under Didio, working with Didio, his love of horror films, working on the film, the film itself, and much more.

Tools Of The Trade – Interview with Star Wesley Eure (26:47) – in this all-new interview with the actor.  Eure begins with how at the time he got the role.  Some of the other details include his work on Land of the Lost, Days of our Life, his wanting to stretch with this role, filming the role and the production, inspirations for the work, the aftereffects of the work, his relationship with Ferdin, the low budget nature of the production, the surprising success of the film, watching this film with his friends instead of CHOMPS (which they all thought they were going to see), and much more.

Flesh And Blood – Interview with Actress Kelly Nichols (31:16) – in this all-new interview with the actor.  Beginning with her Modeling career in the pages of Men’s Magazines eventually being a Penthouse Pet, Nichols discusses her career as a whole.  Some of the details include her career in Make-Up before modeling, her career in Adult Films, her body-double work on King Kong which did not show up in the film, how that lead to the film, working with Cameron Mitchell, the production’s lower-budget nature, her experience filming the nail gun scene, her response to the song in the film during the scene was written specifically for her, her experience seeing the film, her work in adult film including with Chuck Vincent, and much more.  Nichols is a delight recounting her career and working on the production with enthusiasm and detail.

Slashback Memories – David Del Valle Remembers Cameron Mitchell (24:40) – is an all-new look back at the career of Actor Cameron Mitchell.  Critic/Historian David Del Valle gives an account of Cameron Mitchell’s personal and professional history.  Del Valle recounts Mitchell’s up’s and down’s during his very long and varied career in Italy and Hollywood, working with Mario Bava in some of his more iconic films, the work in classic Hollywood, the need for money dictated his need to work on anything and everything but never loss of quality in his performance, and much more.  The interview is intercut with some great footage and art for other films.

‘They Know I Have Been Sad’ – Video Essay by Film Historian Amanda Reyes and Filmmaker Chris O’Neill (19:27) – this all-new Video Essay by Reyes and O’Neil is a truly great look at this very misunderstood film.  Reyes’ voiceover discusses the context to the era that the film was released in, the films that inspired it, the production, the violence within the film, the look at the film from the female perspective, a look at grief within the film, personal contexts for Reyes, and much more.  The essay is a truly thoughtful look at the film and gives one a recontextualized look at a film that’s been known for its more notorious sections.

Radio Spots (1:00)  – two 30-second radio spots that can be played individually or together.  The spot plays over an image of the poster.

Poster & Still Gallery – this 116-image gallery of various Posters, Newspaper Ads, Lobby Cards, Production Stills, and Home Video Art. The gallery is navigated through your remote’s Next and Back Chapter Stop Buttons.

The Toolbox Murders is a cult slasher that’s vital to the genre.  Blue Underground has seen the upgrade as an opportunity to give us more great extra features.  HIGHEST POSSIBLE RECOMMENDATIONS!!!