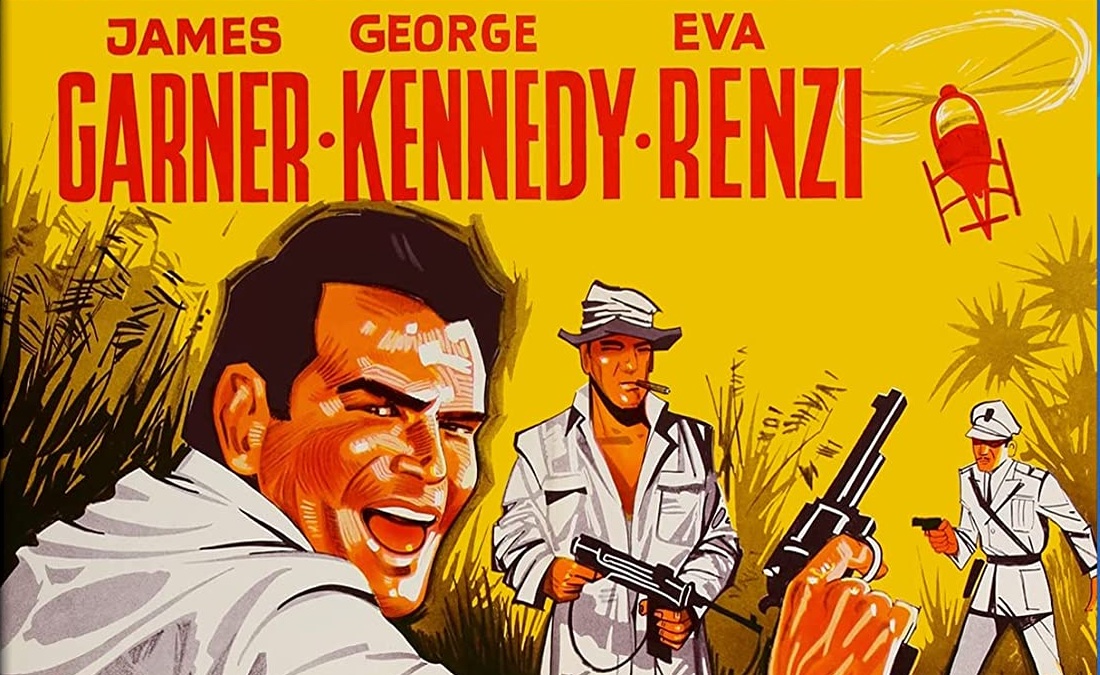 James Garner is a fashion photographer mistaken for a CIA Agent in South America and that’s just the beginning of his problems in The Pink Jungle.  New to Blu-Ray from Kino Lorber.

This action-comedy pits James Garner versus a lunatic George Kennedy (or is he) in the middle of South America looking for Gold.  The biggest stretch one will have to take isn’t that Garner and love interest Eva Renzi go along with the whole ordeal but it is Kennedy playing a South African.

Photographer Ben Morris (Garner) lands in South America on assignment to shoot Super Model Alison Duquesne (Renzi) in the remote jungle.  No sooner than he arrives he’s pegged for a CIA Man by the local authorities Colonel Celaya (Fabrizio Mioni).  The harassment is only the beginning as treasurer hunter Sammy Ryderbeit (Kennedy) begins to either hustle or help Morris and Duquesne.  The put upon duo is never quite sure till the end if the gold or Ryderbeit’s bullshit is real or just made up con of a drunk.

This action-comedy is thankfully light on the sort of ethnic stereotypes and bad jokes that liter studio-produced films of the time.  It actually makes some quite insightful critiques of Americans and White tourists and expatriates, in general, that’s still keen even today.  The direction by Delbert Mann and Cinematography of Russell Metty makes great use of the widescreen frame with an eye for composition that sometimes is missed in modern filmmaking.

Garner and Kennedy are the real couple in the film, playing off each other’s energy.  What’s produced is a duo that should have worked a lot more together but didn’t.  Kennedy’s Ryderbeit, South African heritage withstanding, fits the actor’s charms like a glove.  There’s a boisterous Falstaffian revelry that Kennedy gives the character that’s almost too much to resist. Garner’s charming cad attitude fits Morris nicely especially in the final moments of the film.  Renzi is a bit stranded only has a few jokes at “the boys” expense but nothing else is really there other than to fall in love with Garner’s Morris.

The Pink Jungle is the kind of comedic adventure that moves at an amiable pace allowing the chemistry between Kennedy and Garner to shine.  Everything else is good but it’s the actor’s work together that really makes this one a must-see for fans of either’s work.

The Brand New 2K Master provided by Universal for the release is aces.  The colorful late 1960s technicolor photography is beautifully transitioned to hi-def.  The color reproduction and grain structure are the standouts of this handsome widescreen film.

The Pink Jungle is a solid comedic adventure waiting to be discovered.  Kino has put together a wonderful package.  Recommended.