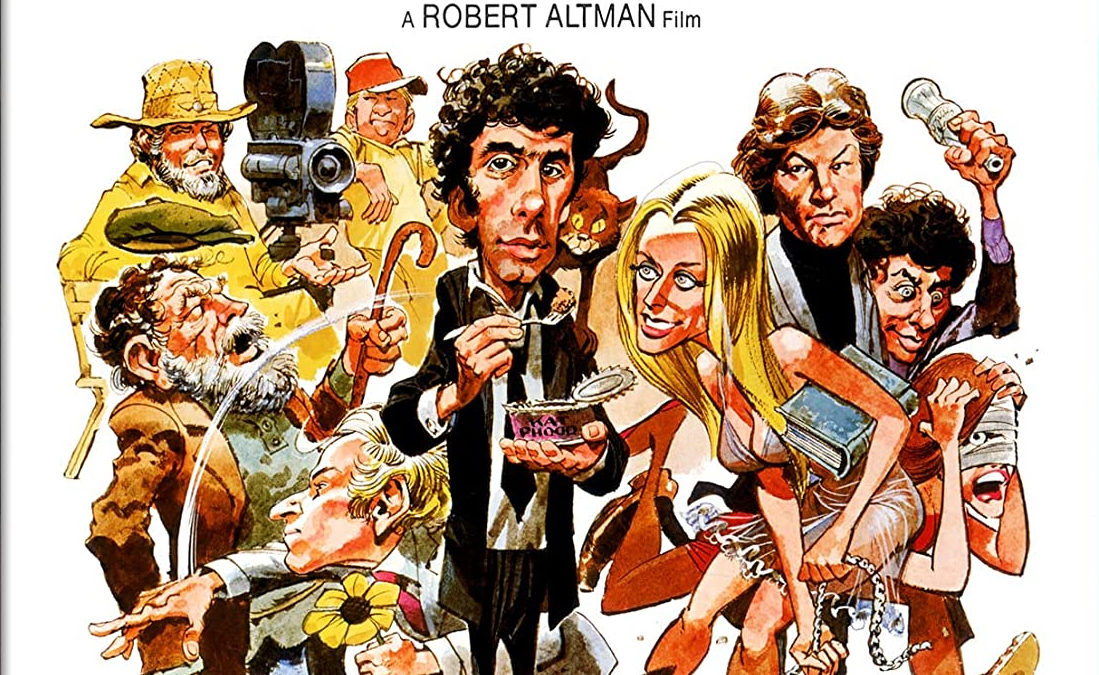 No one did Marlowe better than Elliot Gould and Robert Altman.  The Long Goodbye makes its return to Blu-Ray with a new 4K Master thanks to Kino Lorber.

I still remember reading Pauline Kael’s epic review of The Long Goodbye almost 30 years ago.  I was so flattened by the review that I read it twice noting it as a film that I needed to see.  I’m unsure what I was expecting when I first saw the film on VHS.  To be honest no film could live up to that sort of piece of literary excessiveness.  It has only been in the intervening years that I’ve come to love and adore the film that is as great as that Kael’s infamous review.

The Long Goodbye is the type of film that begins with an 11-minute set-piece between Marlowe (Gould) and his cat.  The cat wakes Marlowe from his twenty-year slumber wanting his “curry brand cat food”.  Mumbling, bumbling, rumbling Marlowe begins his trek to get his cat some food.  This diversion is the beginning of the diversions upon dead ends upon cul-de-sacs of the detective genre.

Co-conspirators Gould and Robert Altman have no concerns to follow the structure, trappings, conventions, or clichés that are inherent in the hardboiled detective genre.  It is no wonder that The Long Goodbye frustrated everyone that saw it in its general release from film noir fans to general audiences.  Cinema like this never goes over well upon release.  It takes time to really seep into the culture.

Much of the reason that The Long Goodbye is so divisive amongst cineastes is there is no formality to the entire film. Altman strips away the veneer (and Venetian Blinds) and hard lacquer of the genre.  Few things iconic pieces remain of the film noir, Marlowe’s suit and car are about the only thing that could signify that it’s of the genre.  Marlowe doesn’t have an office.  The crooks are sun-tanned and play at being Hollywood types more than actual hoods.  The femme fatales are beach bunnies bored out of their minds with their rich artist older husbands.

Altman’s The Long Goodbye takes the most iconic of hardboiled detective fiction of the 1940s and updates it for the lazy pot-smoking Beach Communities of the 1970s.  The results are still as sharp and adroit as they were close to fifty years ago.

The Brand New 4K Master is a revelation.  The technology has finally caught up with the film process that Altman and cinematographer Vilmos Zsigmond used to create the unique look of the film.  The film used the process of “flashing” to create the hazy dream-like visuals without loss of any fidelity.  This process has always made the film tricky to transfer to home video even in the earliest stages of Blu-Ray releases.  Nothing is comparable to the beautiful 35mm prints I’ve seen over the last twenty years.  That is, until now.  The image and tech have finally gotten to the point where with this release the film looks as good if not better than the film print I’ve seen since I’ve started going to revival screenings.  The beautiful grain structure is retained, as well as added sharpness and contrast that’s always been tricky.  Anyone that’s loved The Long Goodbye but has been frustrated by the home video transfers will be happy with this revelatory transfer.

The archival Audio Commentary by Film Historian Tim Lucas begins with the opening music “Hooray for Hollywood” and its origins.  Some of the details include Elliot Gould’s career status at the time, the cat(s) that are prominently featured in the opening, the theme song and its multiple versions of it that play throughout, the adaptation by Leigh Brackett, the history of Phillip Marlowe in cinema and the various actors who played him, David Carradine’s cameo appearance, the work of actor Nina van Pallandt, the technical work of cinematography of Vilmos Zsigmond, the work of Henry Gibson, the work of Sterling Hayden, the work of Mark Rydell and the development in the character he plays which isn’t in the novel, Jess Franco’s love of the film and his use of the visual style of the film including a film series that is based in part of his love of the film, the cameo of Arnold Schwarzenegger, the ending of the film and Lucas’ issues with the film and adaptation, and much more.  Lucas brings his deeply researched touch to the commentary track as he had with others including quotes from the original Chandler novels and interviews from the cast and crew.

Rip Van Marlowe (24:34) – this archival featurette with the actor and director discussing the making of the now-classic deconstructed detective film.  Some of the details include how he came about the film, the casting of Gould, the process of developing the film, the state of Gould’s career as he took the role, the work of Leigh Brackett, deleted scenes, the casting in the picture and how Altman goes about this, the production and how they met certain challenges, the release of the film, and more.  The featurette is from the DVD days and still holds some great anecdotes and information in lieu of a commentary track that Altman was always fickle about recording.

Vilmos Zsigmond Flashes THE LONG GOODBYE (14:24) – this archival featurette with the legendary, now passed, Zsigmond discussing how he came to the US from Hungry, the work he did with Altman on three films in the 1970s, the technical details of creating the visual look they began on McCabe and Mrs. Miller for one of his most famous collaborations with Altman, his distaste for hard contrasty images, Altman’s use of the Zoom Lens and Zsigmond use of the Zoom lens for different purposes, and much more.

David Thompson on Robert Altman (21:03) – the all-new featurette focusing on the director.  Critic/Filmmaker David Thompson takes a deep dive into how Altman began his career in TV until he made a few films until M*A*S*H* then goes through the films that Altman made until he gets to The Long Goodbye.  Thompson does a great job of giving us context as to how Altman produced the film.  It’s a great interview with Thompson discussing Altman.

Tom Williams on Raymond Chandler (14:28) – the all-new featurette focusing on the life and writings of Raymond Chandler.  The author and biographer of Chandler does a fascinating deep dive into Chandler’s career (sometimes not very successful) as a writer, his bouts with alcohol, the release of The Long Goodbye the novel, and much more.  Williams gives us context and understanding of the style in which Chandler wrote (hard-boiled detective fiction) and how that influenced novels and eventually films.

Maxim Jakubowski on Hard-Boiled Fiction (14:32) – the all-new featurette focusing on not just the Hard-Boiled genre but film noir and crime in general.  The novelist and critic discusses the various forms of crime fiction and its origins in Pulp Fiction.  Jakubowski does an amazing job giving the history, information, details, and evolution of Hard-Boiled Fiction.

American Cinematographer 1973 Article – spread over 47 stills that you can navigate with your remote this vital article about the technical aspects of how Vilmos Zsigmond and Robert Altman achieved the specific visual look in the film which is dubbed “Flashing”.

TRAILERS FROM HELL with Josh Olson (2:42) – the screenwriter provides a micro-commentary on the trailer.

The Long Goodbye with this rerelease has been finally given a truly great home video edition.  HIGHEST POSSIBLE RECOMMENDATIONS!