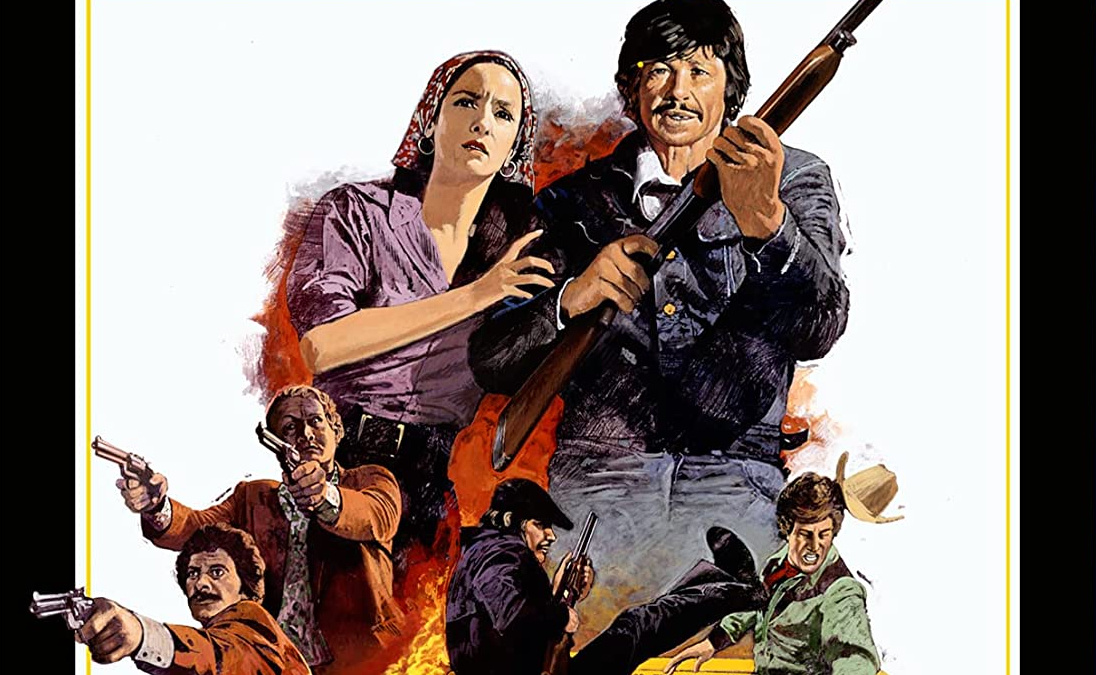 Charles Bronson Billy Jacks it up in the truly great Mr. Majestyk.  Back on Blu-Ray with a new 2K Master by the fine folks at Kino Lorber.

Bronson along with Eastwood, Lee Marvin, and Bud Spencer were the steady rotation of stars whose movies that my grandfather took great pleasure in watching. It was Bronson that was the actor above all that he loved.

I didn’t get it.  To me at the time, Bronson was the dude that made another dude eat a watch.  I hadn’t seen any other Bronson movies except those of the current era.  The current era being the late 1980s into the early 1990s.  That meant Cannon fodder B-Grade action films.  Like the one mentioned above or Death Wish 3. There was a hucksterism in those films that made anyone even ardent fans roll their eyes.

I think it was the full-on meltdown laughter while Charles Bronson feeds a watch to that dude that made my grandfather show me why he loved Bronson.

A double feature of Once Upon a Time in the West and Mr. Majestyk.

Yes, Once Upon a Time in the West is one of the best films ever made.  It didn’t make me understand my grandfather’s love of the man they called Chuck.  No, it was the B-side of the double feature; Mr. Majestyk.  At the end of the film saw Bronson in a different light.  My grandfather saw himself as Bronson.  They even looked a little alike, though most would have said that my gramps was better looking (Bronson gruff to say the least).

My grandfather loved Bronson because as a Hispanic man not only looked like Bronson, but Bronson’s films always had a certain code that his characters kept.  That code was something that he, my grandfather, always kept too.  Hard work and no shortcuts.  Family before everything.  Protect those who are weaker than you.  Something that Majestyk (Bronson) takes with the seriousness of a Samurai in the film.  Those codes and how Majestyk (or any Bronson character) treated people of similar ilk was something my grandfather always did. Now, my grandfather didn’t reign hellfire on shitty criminals, at least not that I’m aware of like Bronson/Majestyk did.

There is a clarity to the way that Mr. Majestyk unfolds in a novelistic way.  Plot points that seem disparaging subplots at first.  Screenwriter Elmore Leonard puts everything together after the plot lines are set, in a way that’s satisfying and elevating of the film.  Billy Jack and Walking Tall are blunt instruments compared to Mr. Majestyk.  That’s because of Leonard’s skill as a writer, Fleisher’s lean economical direction, and of course Bronson’s laconic persona.  Though Mr. Majestyk discusses the plight of migrant workers no matter how small which feels more progressive than the other two films.  One that plays all the way through the film which is not surprising if one has read Leonard’s novels.

The film is built around a series of escalations and Majestyk’s need to bring in his crop of watermelons.  As the police, racist profiteers, and crime lords all conspire against Majestyk for various reasons it’s clear that they are going to push Majestyk too far.  Thankfully, none of the Michael Winner patented sexual assaults occur (probably because Winner wasn’t the director), but Majestyk is forced into action when violence is visited on the people that work for him.

It all ends very satisfyingly as most Bronson’s do with our hero taking the law into his own hands as the law won’t help him or the people he’s trying to save.  The film plays out that revenge with a certain amount of flair and style with an off-road chase that defies reality but would make the departed soul of Hal Needham proud.

If you don’t believe that, believe this.  Mr. Majestyk made a young cineaste that thought that watch-feeding Charles Bronson was a joke into a true believer.  Maybe it’ll do the same to you.

The Brand New 2K Master is a beautiful upgrade from prior editions of the film.  Everything about this transfer is an upgrade.  The sharpness, color reproduction, contrast, and black levels are better than the Twilight Time release from almost a decade ago.  The handsome image looks closer to a 35mm print than any of the editions.  Bravo to Kino for this truly great transfer.

The archival Audio Commentary by Film Historian Paul Talbot, Author of the BRONSON’S LOOSE! Books.  Talbot begins with the opening title sequence and context of when he was recording and who he was recording for.  Some of the other details include the screenplay by Elmore Leonard, a discussion of Leonard’s writings and how Mr. Majestykwas developed and casting possibilities and eventually Bronson being cast, the career and work of Richard Fleisher, the work of cinematographer Richard H. Kline, the blood of the time, tools that they used to create action set pieces like sweeny-gun or purchasing and restoring junked cars for the car chases and action, the directorial style of Fleisher, the career and work of Charles Bronson, the career and work of Al Letteri, the work of Lee Purcell, the career of stuntman Dick Warlock who was Bronson’s stunt double and would eventually be Kurt Russell’s stunt double, the production, locations, extras, and money they used locally for the film, the use of Coors beer and Coca Cola in the film, Leonard’s novelization of the film (it was a screenplay first), a huge incident that caused issues with the behind the scenes crew for Bronson, the success of the film’s release, the marketing of the film that alluded to Billy Jack and Walking Tall, the lack of Jill Ireland cast in the film (which was the norm on a Bronson production), the work and career of Linda Cristal, the amount of melons the production when through dealing with story details, the release of the novelization, the reviews at the time of release, an account of Bronson’s workout routine to keep himself (he was 52 at the time of filming this film) in shape and healthy, the stunt work and production of the final chase scene, and much more.  Talbot definitely makes it a point to call out all the makes and models of the various cars.

Interview with Director of Photography Richard H. Kline (13:59) – the all-new interview with DOP Kline where he discusses how he got hired for the film, the uniqueness of the film’s plot, the action he shot and how it was achieved, how the car chases were achieved and much more.

Interview with Actress Lee Purcell (27:56)- is an all-new interview with the actor where she discusses the surprising success of the film, her work up until she was cast in this film, the production of the film, and much more.

Mr. Majestyk is Bronson at his best in the B-Movie Action arena.  Kino has given us a great edition.  Recommended!