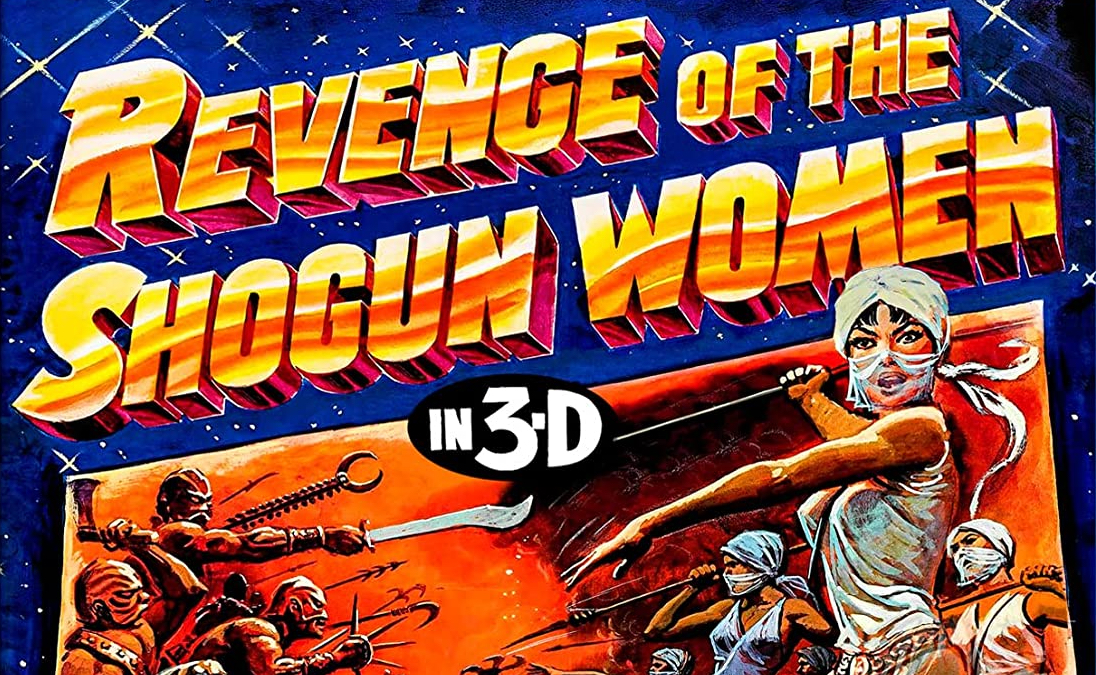 Revenge of the Shogun Women in 3D is another Kino Lorber/3D Film Archive collaboration.  Add in some ultra-rare 3D shorts and you’ve got a 3D junkie’s dream.

Revenge of the Shogun Women is not a great film.  It’s not even a good film.  It’s a moment frozen in time.  An oddity of tech and martial arts trying to merge into a cohesive whole.  Director Mei-Chun Chang creates a rape revenge martial arts films that seems more to satisfy the 1970s exploitation/grindhouse crowd than actually trying to break new ground.

The story is simple; gang of raping and pillaging pirates try to subjugate a local village and all its residents.  A few manage to escape capture and death going to the local Shaolin temple. The Shaolin temple is ran by female monks who have been taken in by the monastery after they had been raped (a custom the film tells us).  It is only a matter of time until the gang finds where the other townswomen are.  Fighting, dynamite, explosions, and some crazy deaths ensue.

As 1970s rape revenge films go, Revenge of the Shogun is somewhat tame … thankfully.  Once the stakes are set there isn’t any other real sexual or lurid scenes.  Though one knows of history there are myriad of reasons they could have chosen.  Regardless, it is something that needs to be mentioned as it features so prominently in the opening moments.

The direction and action scenes are standard for a 3D entry of that time.  One could consider it either stately or stagnant depending on how you view the film.  The film’s 3D seems to impose limitations that the story or action can overcome. Nothing feels truly kinetic or propulsive in the film.  Revenge of the Shogun Women is all 3D imagery and not much else.  Though there is a whole scalp fatality but you’ll have to see the movie for that.

This one is a tricky one.  By typical standards this isn’t a great transfer or anything close to it.  By restoration standards … where the transfer is sourced from the only remaining print of the film and that print is nearly destroyed by vinegar syndrome??? This is a damn near miracle.  The 3D is similar to the Dynasty that was released earlier this year.  The issues are with the actual camera system used.  The 3D is more gimmicky with objects pushing out to the screen with the depth of the picture being non-existent.  There are some ghosting issues but again it’s an issue with the camera system more than the transfer.  Overall, it’s a fascinating look at the restoration work done by the 3D Film Archive.

College Capers (15:15) – the 50s version of Animal House panty raid scene.  Just no nudity, but a long leggy brunette blowing bubbles into the camera.  Though the frat douches remain.  What’s the most fascinating about this is the “sauciness” that’s imbued into the comedic short. Restored from the 3D Film Archive from the only remaining copy of the film.

Persian Slave Market (11:05) – three burlesque dancers perform to a static 3D camera.  This could be defined as a “nudey cutey” as there is some nudity at the end of each dance.  Another restored from the 3D Film Archive from the only remaining copy of the film.

Two Guys from Tick Ridge (16:20) – A “movie producer” invites his hayseed friend to Hollywood to show off his new project, a 3D short film.  The hayseed and “producer” talk through various short examples of the possibility of 3D film.  This includes plane flights, magic tricks, women dancing, blowing bubbles (again), and more. Restored from the 3D Film Archive sourced print.

Revenge of the Shogun Women is a 3D oddity that’s been restored for prosperity.  Recommended for the 3D junkies.