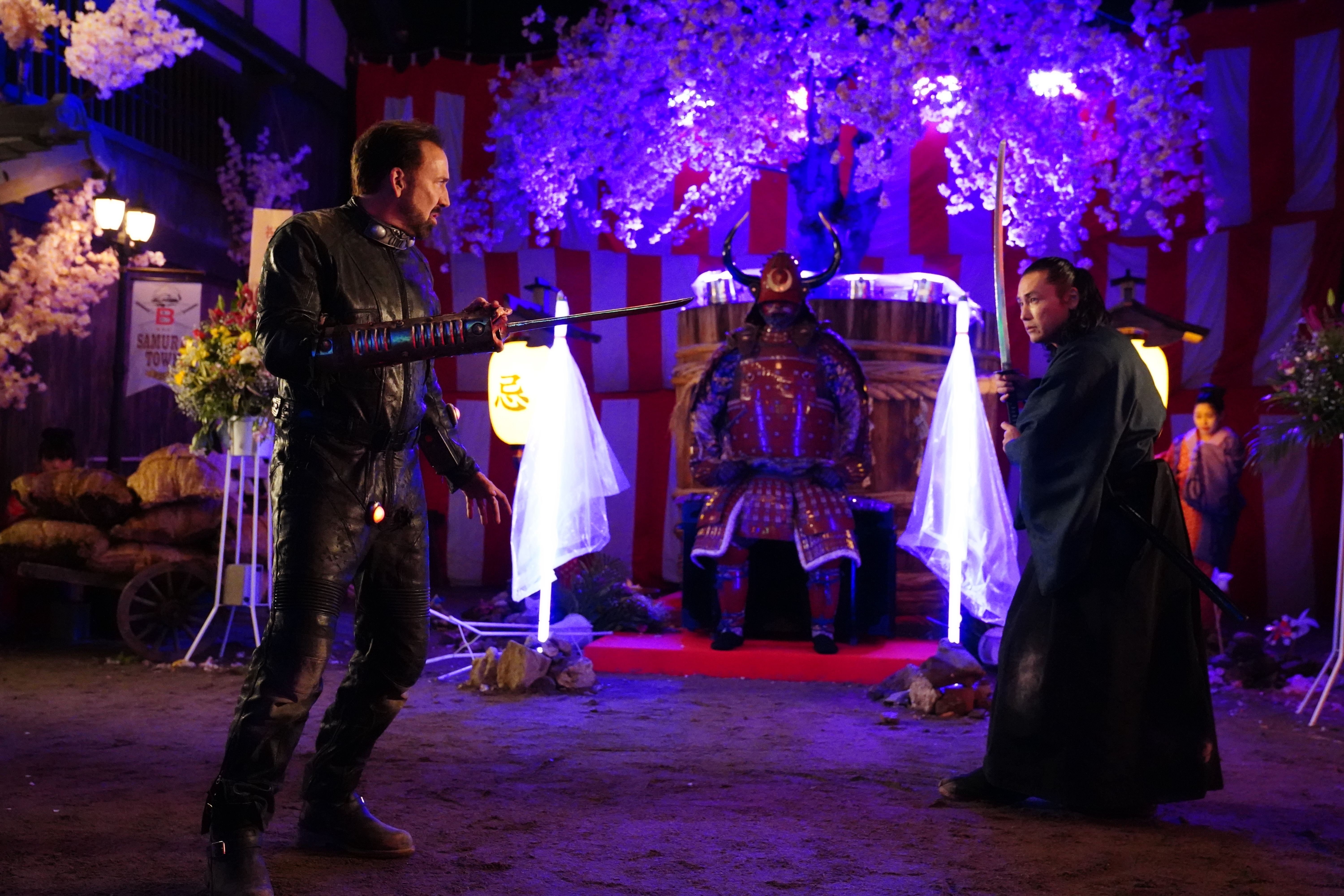 Nicolas Cage and Sion Sono are a match made in Gonzo Filmmaking heaven.  Does the Samurai/Western/Supernatural/Nuclear Apocalyptic/Crime film Prisoners of the Ghostland live up to the men’s respective reputation?

Far too often people label films “crazy” when they’re not.  True transgressive filmmaking and filmmakers are a rarity nowadays.  Even rarer is the use of actual Movie Stars in these types of films.  Things that people say are transgressive truly aren’t.  Prisoners of the Ghostland is a piece of pop lunacy that is truly transgressive in its “I don’t honestly give a fuck if you get it” attitude and style of storytelling.  Sono has made a film that is equal parts nonsensical and deeply mediative.

As a willing partner in this venture is Nicolas Cage.  Cage is Toshiro Mifune to Sono’s Akira Kurosawa.  There is an understanding to Cage’s madness under Sono’s direction that few filmmakers have accomplished.  Cage appears to have found a complicit and even wilder artist than himself in Sono.  Broad Specificity is the best way to describe Cage’s work here.  The no-named Hero that Cage plays is both a very broad archetype and a specific abstract piece of made-up mania.  Cage plays the film with bursts of his patented style of eccentric dialog and mannerisms but its suited for the role as there’s even bigger and broader performances in the film.

This is the type of film that even attempting to describe its plot will do no good for the film or the perspective view.  It is the type of film that’s equally propelled by plot but also imagery both dream and nightmare.  Sono has taken the script by screenwriters Aaron Hendry and Reza Sixo Safai, which I’m sure was a very straight-ahead venture, and sliced and diced it into oblivion.  What we’re left with is the passing feeling of a “type of film” not so much outright homage or satires.  A crazed heady brew of both Western and Eastern ideals bashed (not mashed there is a difference) together to create something that is in the upper echelon of weird Sono Cinematic Masterpieces (which there are plenty).

The film feels as much at home with Leone and Kurosawa imagery as it is with the sort of gross go for broke comedy of John Waters.  Therein lies the conundrum of Prisoners of the Ghostland for an audience wants one thing with their films.  Sono, along with his accomplice/star Cage, has no sort of want or inclination to have a film remain in the confines of genre or conventional storytelling.  Prisoners of the Ghostland goes from the Shock and awe of NC-17 level gore to mediative critiques of society to goofy comedy.  These blunt transitions often occur in the same scene.

In the end without any hyperbole Prisoners of the Ghostland is truly a unique cinematic experience.  A Rorschach Test for the adventurous filmgoer that could end in elation or anger.  Which one?  Take the ticket and enjoy the ride …