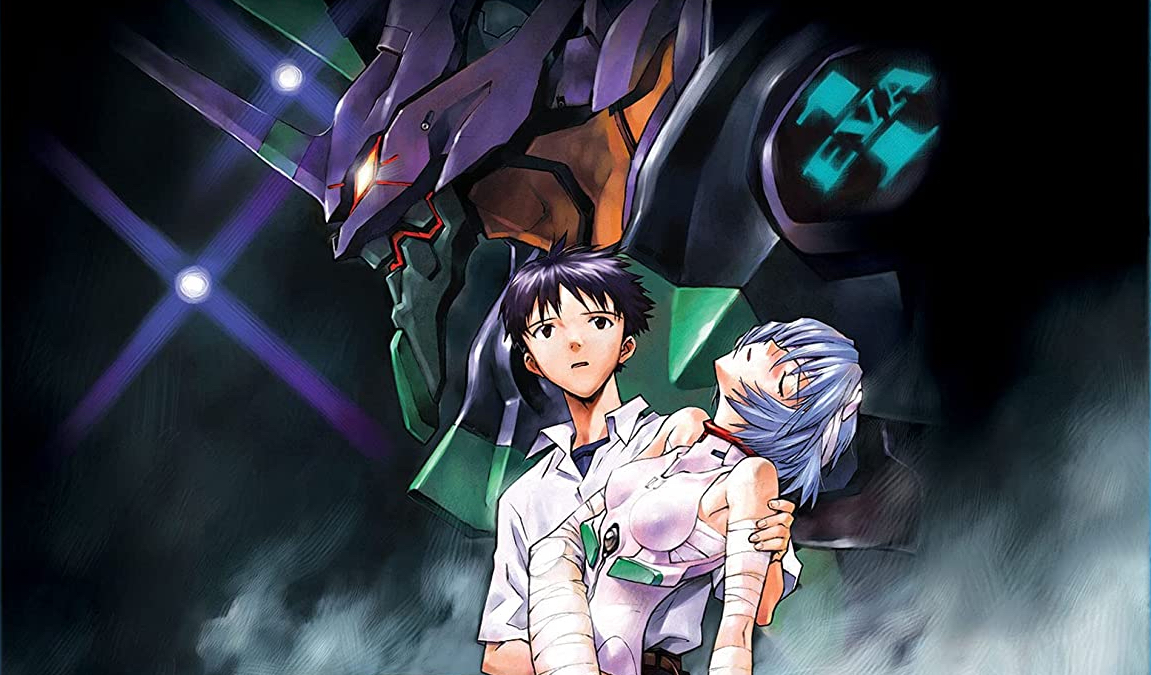 The influence of Neon Genesis Evangelion has on popular culture cannot be understated.  Not just in Japan where it literally saved a floundering Anime industry but worldwide.  Its reach is as diverse as The Wachowskis, Rick and Morty, Guillermo Del Toro, Gravity Falls, even as recently as the Disney+ Animated Series What If … ? (the episode “What If Tony Stark Never Became Ironman”, you’ll see…), Kong vs Godzilla (the iconic Battleship fight was lifted almost frame for frame from Episode 8).

The show follows a group of Children Test Pilots of EVA, Mechas designed to defend Earth from the Angels, an extra-terrestrial race whose motivations for destruction are not known.  As these Children have the weight of the world on their shoulders they are pushed and prodded by their Government Minders, the various Politicians and Scientists whose motives are shadowy, to say the least.  As this group of Children grows in number and skill the toll is taken on them.  Slowly they along with the people that hurt and protect the Children begin to realize there is something larger going on.

Neon Genesis Evangelion is far beyond some normal kick-ass sci-fi Mechas vs Kaiju series.  It is elevated by its themes of the very nature of humanity, our relationship with technology, religion, creation, death, and ourselves.  Evangelion is as adroit as a Sci-Fi series has been produced.  Everything within the story feels organic and never forced.  The themes grow out of the characters we invest in.

Please Note: The international re-release of NEON GENESIS EVANGELION does not contain “FLY ME TO THE MOON” in its end credits in any of its home video editions.  The originally appeared on the Original TV Series during its airing.

EVANGELION:DEATH(TRUE)2 / THE END OF EVANGELION

Note: reviewed together as they are essentially tied to one another containing the Recap and the remade versions of Episode 25 [in Death] and Episode 26 [In End].

Long before Lost or Game of Thrones there were ending to pop culture events that fandom outright rejected.  It’s common knowledge that most of Japan and Anime fans around the world hated the ending to Evangelion in its first iteration.  So much so, the creators tried to correct their wrong with EVANGELION:DEATH(TRUE)2.  Essentially a recap of all 24-episodes of the series including a newly conceived ending to satisfy Fan-Rage.

One can look at EVANGELION:DEATH(TRUE)2 as a crass cash-in but the recap is so artfully edited that one can fault them.  The newer reconceived ending which is the entirety of THE END OF EVANGELION is still not a traditional ending but feels like a bit more fan service than the original oblique ending.  Though many will find this ending as oblique as the original there is a bit more of a narrative finality to it that the original ponderous two episodes had.  My preference is the original ending as conceived as it feels like a big swing and not as closely referenced to 2001: A Space Odyssey as this new remixed edition is.

Though the live-action section of THE END OF EVANGELION is poetic and self-reflexive to fandom in a way that is unexpected, beautiful, and sharply critical. The finale feels as it’s a part of the same universe as the first ending but suffers from “show a lot more” that was implied.  No doubt many will find this ending more satisfactory.  Which is the whole purpose of this endeavor in the first place.  Though many of us that are open and receptive to the original ending will find nothing a fault but still find the mystery being unveiled a little disappointing.  As most big idea/concept shows suffer from; explanation shrinks the power of mystery.

The Show looks the best that it has ever looked (that includes on Netflix).  The time and care that they’ve taken with ensuring the transfers in this edition were near perfect has to be commended.  The full bit/rate allowed in all of these episodes just smashes any streaming service version of the show to pieces.  The image has great contrast levels and black levels that streaming can never produce.  That also goes for the sharpness and color reproduction in each episode.  Bravo all around for the upgrade/restoration of the show.

Note: Episode 16 SPLITTING OF THE BREAST seems to be pulled from a Video source as the quality of the image is severely degraded as compared to the rest of the series.  I have not found anything but it is more than likely the original source was not found or available.

EVANGELION:DEATH (TRUE)2 / THE END OF EVANGELION

The transfer for this movie is solid but the nature of how it was created with the footage transferred to Film (this was back in 1997) from the TV Elements.  Because of this, there is a degradation to the image that no matter how great a Transfer is, and it is a great transfer, the elements from the TV series looks decent just not as revelatory as the TV series does.  An additional issue is that the series was designed for 1.33 Academy Frame and the film is 1.85 Widescreen.  This has caused all the elements from TV to be re-framed and zoomed-in which further causes issues with the sharpness and quality of the image.  All that being said there is a very filmic quality to the transfer that has been retained that’s quite a different experience than the TV series.  The newer sections specifically created for this look downright gorgeous and one can instantly tell the difference between the original TV Series and the new section.

Note: This edition does not feature the original English Dub and Subtitles featured on the ADV DVD releases.  BUT they are included on the Ultimate Edition.

Title-free Opening [1:30] – Opening without any of the Burned in Titles.  No English Subtitle Option.

Genesis 0:0 IN THE BEGINNING [29:23] – is an archival recap program produced for Japanese TV.  Essentially a clip show, it’s designed to give an audience all the details of the characters, EVAs, the Angels, the characters and much more.  The show includes some commentary from the creators about their intent and development of all aspects of the show.  Japanese with English Subtitles.

Image Board Collections [4:43] – an image gallery of the various characters and development of the design work.  The gallery is designed like a live gallery with movement and fade-ins.  It can be paused but not navigated through.  Though a piece of the score by composer Shirō Sagisu plays throughout.

Japanese Blu-ray Box Commercial [2:02] – an impressive Ad from Japan promoting the Blu-ray release of the show.  The Ad begins with the entire opening credit sequence for the show and then dives into the contents of the boxset.  A nice touch, Shout Factory has translated the contents to the subtitles.  Japanese with English Subtitles.

Music Video: The Cruel Angel’s Thesis [4:04] – the song from the opening credit sequence.  The full song/video plays various clips from the show. No subtitles.

Included on this disc are the following 11 Episodes in animatic form:

Episode:15 Those Women long for the touch of others’ lips, and thus invited their kisses. [20:43]

Episode:21 He was aware that he was still a child. [20:46] – entire episode, minus one shot, is presented in pencils… fascinating.

Episode:25: Do you love me? [20:51] – this iconic episode still keeps Beethoven’s 5th Symphony as its Music Track and includes some of the most haunting images from rough sketches you’ll see.

Episode:26 Take care of yourself. [20:56] – because the title cards that are so important to the finalized version of the episode are included here but not in English.  Additionally, the rough nature of the animatic leads to a very interesting tone that further deepens the anti-climatic and artfully humane ending.

The animatic version included has some music and sound FX but all dialog is restricted to essentially dialog bubbles (in Japanese as it is a Japanese production).  The animation is of course in various forms of completion from storyboards to rough pencils to completed transferred to tape for the edit segments of animation.  For anyone that’s purchased Shout/GKIDS titles know that these are often included.  People that are fascinated with animation or are animators themselves will not just find these extras interesting but vital to the creative process.  Bravo to Shout/GIKDs for including so many of the animatic versions of the show. No subtitles are included because there is no dialog.

Genesis 0:0’ The Light from Darkness [26:52] – this featurette first aired on Japanese Television in 1997 to promote the upcoming movie goes through all of the particulars of a recap first with characters, technology that makes up the Evangelion series.  In the second half of this special, the various Japanese Cast members discuss their characters, a Music Video, ads for the home video release, the premiere of the movie, and finally a look at the movie that was in production at the time.  In Japanese with English Subtitles.

Deleted Live Action Scene [10:51] – the live-action scene is presented in Japanese but without subtitles.  There isn’t much to say about it because there isn’t a lot of context.

Making of Live Action Scene [16:31] – this making-of documentary doesn’t give much in the way of context either other than to show that these were live-action characters and a lot of great b-roll footage from the shoot and also the raw footage.  Japanese with English Subtitles.

Theatrical Teaser [1:19] – that is filled with the live-action footage that was eventually cut from the film.  Japanese with English Subtitles.

Final Scene Alternate Take [3:10]  – a different version of the ending scene that plays out very similar but a different bit of dialog at the end.  Japanese with English Subtitles.

Episode:25’ Love is destructive. (Partial Animatic) [17:32] – like the other animatics included in the set this one does not have any dialog, only music, and sound fx.