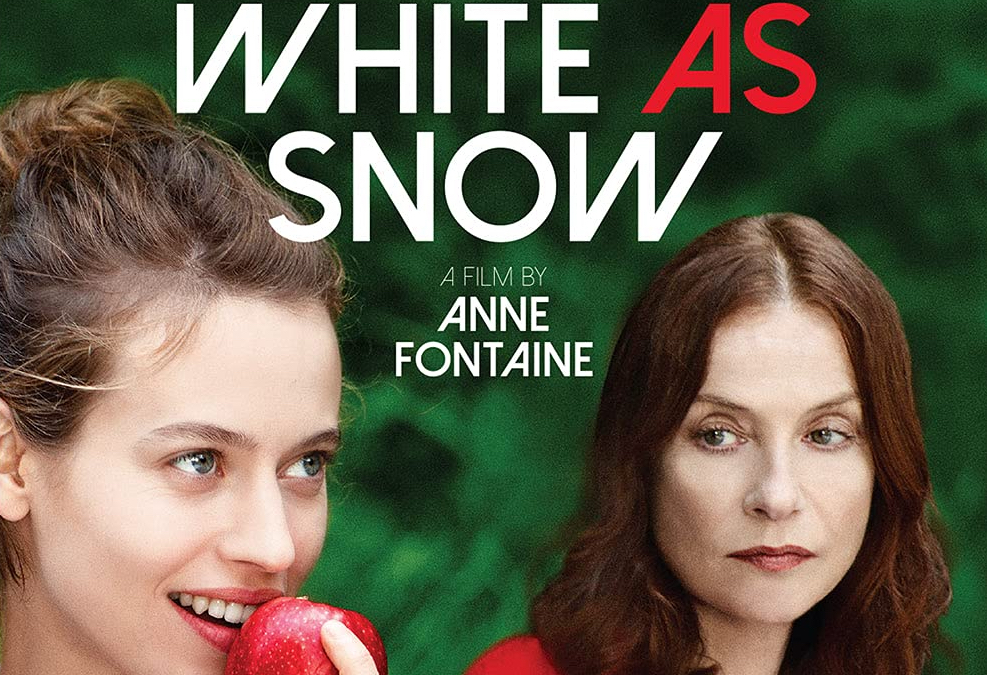 Is there anyone more perfect than Isabelle Huppert as to play an updated version of the evil Queen in Snow White?  No, there isn’t.  New to Blu-Ray from Cohen Media Group.

White as Snow could be mislabeled as a “dirty” update of the famous fairy tale.  Falling somewhere between “naughty” and “nice” the Anne Fontaine directed film gives us a compassionate and knowing story of a young woman that finds her sexuality on her own terms.

Claire’s (Lou de Laâge) father’s recent passing has sent the young woman into a malaise.  The same goes for her Stepmother Maud (Huppert).  That malaise turns murderous when Maud mistakes her lover’s obsession with Claire as mutually reciprocated.  As Maud’s plan goes very wrong, Claire finds herself in the care of various men (seven to be exact) in a small town in the French Alps.  Rather than heading back to Paris, Claire begins to explore the possibilities of life.  Claire begins multiple relationships with the seven men, some sexual, some platonic.  Each of them changing and evolving Claire.  Though, it is only a matter of time until Maud finishes the job that another started.

Let us be upfront… this reviewer cannot say enough good things about Isabelle Huppert in anything she does.  With that aside take this reviewer’s critique that there should have been at least 25% more Huppert in the film with a grain of salt.  There has rarely been a perfect match to actress and well-known part than Huppert in the role of the Evil Queen in Snow White.

The actor brings a vanity that is so subtle and uniquely her that you’ll find yourself smiling at even the most criminal of actions she takes through the runtime of the film.  Huppert is so good you may find yourself actively rooting for the Evil Queen/Maud as she attempts to poison de Laâge’s Snow White/Claire with the iconic apple (sometimes you know an apple is just an apple).

Part of the charm of White as Snow is a sense of fun and play from the opening moments to the final frame.  Fontaine’s biggest weapon to ensure there isn’t a lecherous tone is always making sure that Claire’s own destiny, sexual or otherwise, is always in her hands.  Added with de Laâge’s performance and her interactions with the seven men/dwarves is perfectly balanced.  It never feels false that de Laâge’s Claire is exploring herself that isn’t just limited to her sexuality but her tastes, her wants, and desires.  It’s a heady and mature performance that never feels weighty.  It is only upon reflection one realizes de Laâge is every bit the equal to her onscreen stepmother.

Director Fontaine finds the right mixture of tone that goes from whimsically arched and humorously critical.  That balance makes even some of the more austere murderous or lecherous actions in the film papabile.  Even the way that Fontaine approaches the sex scenes and sexuality in general, removes it from the creepy and pornographic setup that many think would be the outcome of this film.

White as Snow is an adroit adaptation for the oft-told Snow White fable.  One that is as much fun and naughty as one would want but keeping the much-discussed “gaze” at a critical and creepy minimum.

Everything with Huppert gets a few bonus points.

Cohen Media has done an excellent job of transferring the film to Blu-Ray.  The ethereal look of the film is kept perfectly tuned to keep the image sharpness but to not betray the Unsworth-Style haze that ebbs and flows throughout the feature.

White as Snow will surprise and delight the viewers that don’t mind a bit of sex with their fairy tales.  Recommended!!!