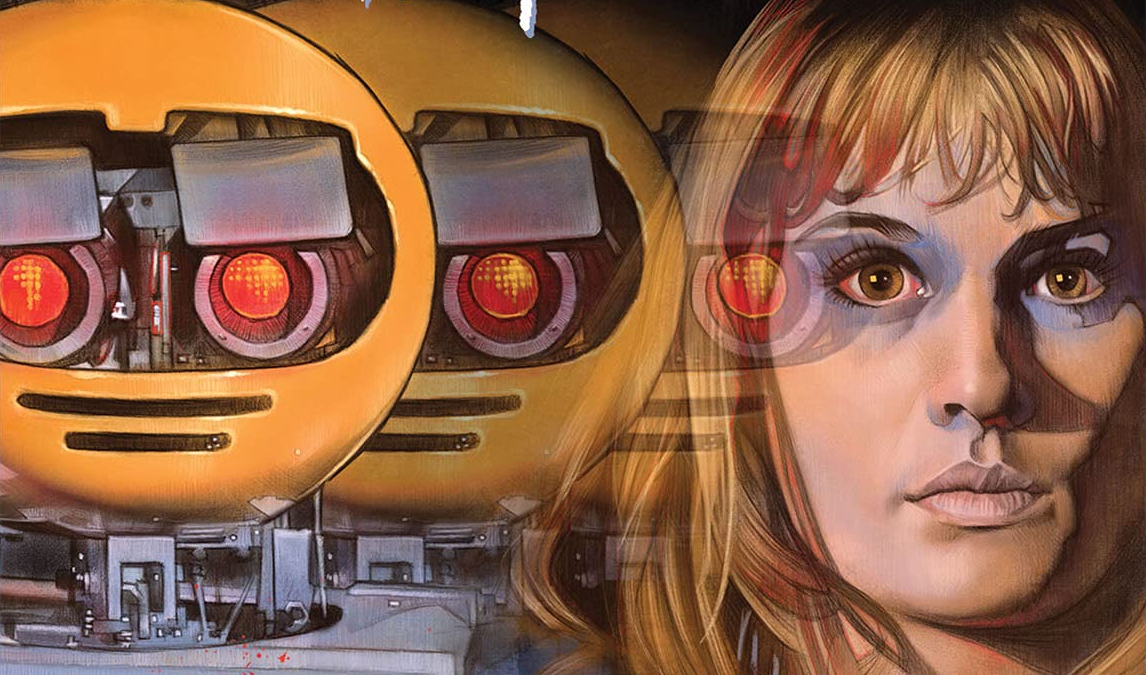 Wes Craven goes hard into the camp of Deadly Friend this Bride of Frankenstein riff.  Scream Factory has brought the film to Blu-Ray filled with extras.

There is something feverishly strange about Deadly Friend that isn’t abundantly clear that Wes Craven is taking the piss, as the English say, immediately.  Yes, there’s a robot made by a kid genius that has AI and no one makes a big deal about it.  Yes, Anne Ramsey as the mean old lady across the street is literally a cartoon evil character.  Yes, the robot sounds like they pulled the Sound FX work straight from Gremlins (which as a WB movie I could see them doing in this era).  But it’s the infamous basketball scene that pulls it over the edge into truly delicious fun.

Boy (Matthew Laborteaux) meets Girl (Kristy Swanson).  Boy has Robot.  Girl and Boy go on adventures with said Robot.  Girl is murdered by her abusive father.  Boy brings Girl back to life with the help of said Robot’s homemade AI Chip.  Girl/Robot wreak havoc on all those that did her/him wrong.  Boy still loves Girl/Robot and tries to make everyone understand.  And they all DON’T live happily ever after.

With someone like Bruce Joel Rubin as your writer/adaptor one would expect something a bit more … subtle.  The writer of Ghost and Jacob’s Ladder teamed up with Wes Craven to give us something that feels like the two sides of their own style.  Rubin’s otherworldly touches are here.  Craven’s propensity for youth characters and adept violence is here.  Combined it makes for an overwrought horror melodrama that sneaks up on you like that basketball does to Anne Ramsey’s character.

True Camp occurs when no one knows they’re making Camp.  Craven and Company had no clue the tonal shift and small touches beyond the basketball would push this over into the ridiculous.  From Swanson’s makeup to the sound design to the movements of Swanson’s character to the cartoonish evil characters from the Dirt Bike Dirt bud to Ramsey to the abusive Father.  Everything is just a few degrees askew to give you that not what you’re expecting.

Deadly Friend is sure to put a smile on any horror fan’s face.  How can a movie that at its end has Kristy Swanson’s character’s voice replaced by the grumblings of a robot that sounds like it’s from Joe Dante’s Gremlins.  The answer is; you just can’t.

The new HD 2K Scan Of The Film From The Interpositive is a level up from the previous home video edition of Deadly Friend.  The sharp handsome image contrast and black levels look to have been better adjusted in this version giving the image better definition throughout the film which looks more filmic now than previously.  Bravo to Scream Factory for a great job at bringing Deadly Friend to life on Blu-ray, a film that’s never looked good on home video.

Hey Sam, Nice Shot – An Interview With Actress Kristy Swanson (9:29) – is an all-new interview with the actor Kristy Swanson.  Some of the details include how she got the part, the script by Bruce Joel Rubin, changes in the production and script changes a few weeks into production, Craven wanting to do something “different”, her work with the movement coach, the infamous basketball scene which was a reshoot, and more.  Note: The interview was recorded via Zoom/Telechat.

Written In Blood – An Interview With Screenwriter Bruce Joel Rubin (8:11) – is an all-new interview with screenwriter Bruce Joel Rubin.  Some of the details include being offered the screen adaptation and the how he decided to do the adaptation that he initially turned down, working with Wes Craven, the original adaptation, the test screening and the rewriting of the script to add more gore, and much more.  Note: The interview was recorded via Zoom/Telechat.

Robots, Ramsey And Revenge – An Interview With Special Makeup Effects Artist Lance Anderson (5:02) – is an all-new interview with Special Makeup Effect Artist Lance Anderson.  Some of the details include how the final makeup appliance worked, his lack of work on the BB robot, working with Anne Ramsey and creating a lifecast of her, and more. Note: The interview was recorded via Zoom/Telechat.

Deadly Friend is a camp horror classic waiting to be discovered.  Recommended!!!