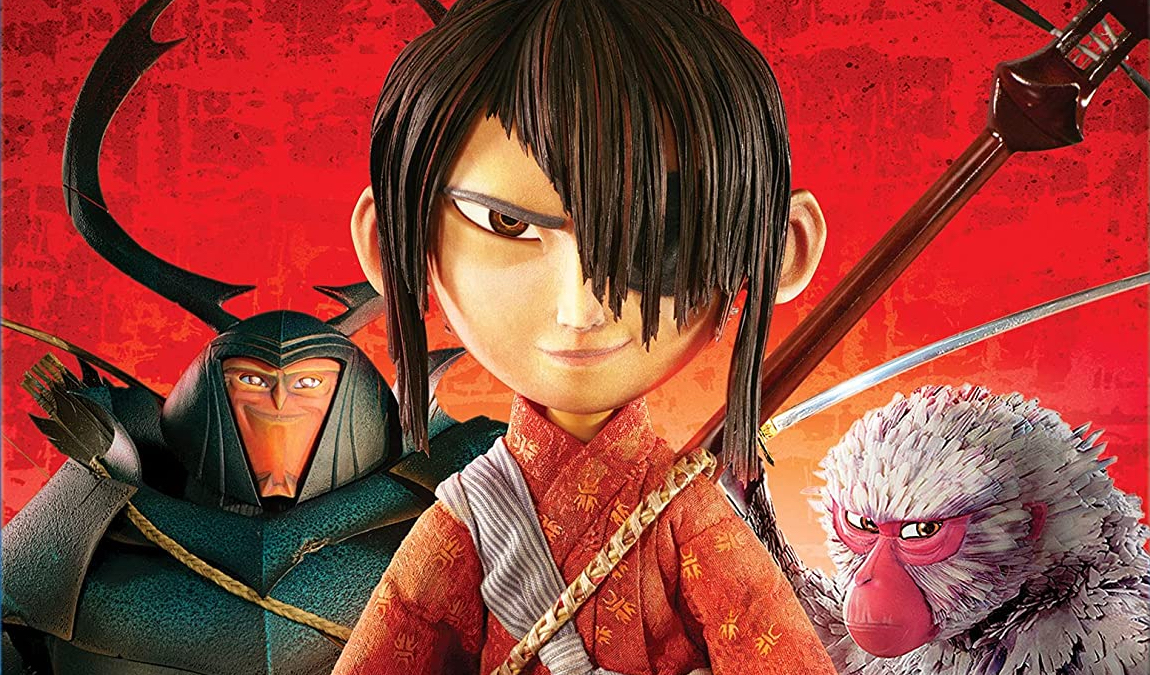 Kubo and the Two Strings continues LAIKA Studio’s streak of beautifully created stop motion animated features.  This Japanese-themed fairy tale is nothing short of brilliant.  Shout Factory and LAIKA have teamed up for yet another impressive Blu-Ray Release.

Director/Animator/CEO of LAIKA Travis Knight makes his debut feature with a stunning ode to family, story, and ultimately forgiveness.

Kubo (Art Parkinson) wakes up every morning to care for his mother and go into town from their sea cliff dwelling.  He enchants origami to tell the story of his father, mother, and her father The Moon King (Ralph Fiennes) to the delight of the townspeople.  Kubo quickly learns that the oft-told tale is not one of legend but one of the present.  His mother’s sisters (Rooney Mara) come to town to take back their sister and Kubo.  Left with a Magical Monkey (Charlize Theron) and a Half-Human Half Beetle Ronin (Matthew McConaughey) to find his father’s sword and armor to fight against his grandfather and aunts who took one of his eyes and is intent on taking the other.

Kubo and the Two Strings differs from most adventure films as the quests are ultimately a misdirect.  Often times the call to adventure is used tirelessly as a framework to hang any story that takes place in a mythical or fantasy world.  Knight and screenwriters Marc Haimes, Christ Butler, and Shannon Tindle set up these troupes and follow through in an unconventional way that both uses those archetypes and tosses them aside.  Part of the beauty of the film is not in guess the twists and turns, some are obvious others are not, but in the very fact that they take them.

Few films are as bold as Kubo and the Two Strings to end in the way it does.  Even more seemingly “mature” and “stately” entries into the Fantasy subgenre take the turn that Kubo does.  At its end, the film is as bold and humane as anything that LAIKA has produced.

This is another great transfer by Shout Factory and LAIKA Studio.  The 2016 2D Blu-Ray and 3D BD are solid but side-by-side comparisons to this new disc can see the differences in the five years since the first Blu was released.  Like The Boxtrolls this new transfer’s biggest difference is the color reproduction.  There are slight enhancements to the vibrance of the color and a slightly better definition in the contrast levels.  The transfer’s strongest point is its contrast and black levels that have more complexity here than the previous edition.

The archival audio commentary by director/animator Travis Knight is much like the rest of the commentaries on the LAIKA Studio Editions in its informative depth.  Some of the details discussed are the importance of the opening images for not just this film but LAIKA in general, how the opening sequence took the entire production to create, the difficulty with creating water in the stop motion, the importance of origami in the film, how the huge mountain shot was achieved, the inspiration that Hatori Hanzo brough to the film, how the origami Samurai and figures were designed and constructed, how they found lead voice actor Art Parkinson, working with George Takei, a breakdown of the Sisters attach Kubo scene, the difficulty of making a puppet hold anything, the advent of a “puppet hospital”, the creation of Monkey and working with Charlize Theron, the creation of Bug and the casting and eventual working with Matthew McConaughey, the struggles voice acting and voice direction (including a great story about McConaughey), the influence of Raiders of the Lost Ark and Ray Harryhausen on the action, the enormous puppet of the Skeleton and how it was moved and everything that was achieved with a 16 foot mechanical marvel, how the stop motion on the face was achieved, the influence of Miyazaki and Kurosawa on Kubo, how puppets “sweat”, how the dream sequence was achieved, how LAIKA approaches the look for each of their films visual styles, his love of Alien, how the finale was achieved and animated, the creation of the final monster, a great piece of how LAIKA keep their animators limber, and much more.  Knight is always welcome to give credit to the many animators/performers that helped bring this unique film.  Much like the commentary tracks for both Paranorman this track gives an amazing wealth of information about the creation of this beautiful stop motion work of art.

Inside LAIKA: Confronting The Epic Challenges Of Kubo And The Two Strings (13:38) – is an all-new featurette that looks into the work and new creative challenges (KIMONOS! 3D PRINTED DRAGONS!  16-FOOT SKELETON MONSTERS!!! COSTUMES!!!) that went into creating this epic adventure film.  The featurette has some great looks at test footage behind the scenes of the process and a look at each character and how they approached them including some great tests for each and some up-close behind-the-scenes footage especially for the bigger set pieces of the film.  Comments by director/animator/producer Travis Knight, animation supervisor Brad Schiff, costume designer Deborah Cook, rigging supervisor Oliver Jones, production designer Nelson Lowery, animator Charles Greenfield.

Inside LAIKA: Revisiting The Puppets With LAIKA’s Animation Team – this all-new featurette is a look at the various characters in the film.  The 1-to-2-minute featurettes are broken down by character and are essentially micro-commentaries by the animators discussing the animating the character.

Feature-Length Storyboards (92:19) – the all-new feature is like the recently released Paranorman and most Shout Factory GKIDs Studio Ghibli’s Blu-Rays.  As “animatics” have become a vital part of the animation process this is vital including, especially for anyone interested in any form of animation including stop-motion.  It’s a great way to compare the finished product and how much character and subtly the animators place into the completed animation.  Watching this along with the other two LAIKA Studio Blu-Rays with the same featurette one can see the technology they use to create the storyboard/animatics evolve as this version is much more refined with colored sequences and other pieces that help give this rough form of the film a bit more life and understanding.

Kubo’s Journey (28:27) – This carry-over from the original Blu-ray disc, like the one from Paranorman disc, is still an excellent making-of documentary. The 40-minute documentary covers all aspects of the production leaving nothing not discussed from the design, the creation, and development of the story, its origins, the challenges they faced creating a huge epic in small scale.

Corners of the Earth (3:06) – an archival EPK-style featurette looking at the expansive epic nature of the film and what it took to create it.

The Myth of Kubo (2:33) – an archival EPK-style featurette looking at the creation of the story, the themes, and more.

Kubo and the Two Strings in this newly remastered edition is a perfect complement to the film.  Shout Factory’s release of this LAIKA Edition is a must-own.  HIGHEST POSSIBLE RECOMMENDATIONS!!!!