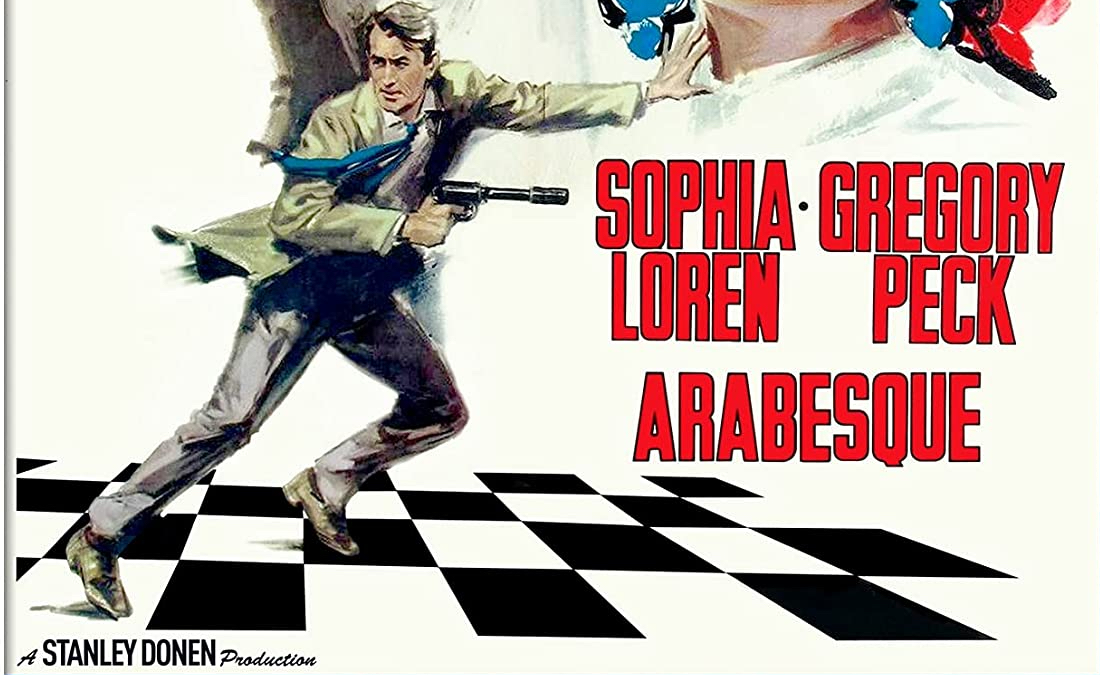 Much like the oft-discussed Hippies and Summer of Love, Mod culture was a blip on the screen of Pop Culture history.  A time that was small yes but influential.  You would think that Mod Culture had gone on for years. Arabesque is a film that appeared to be influenced by Mod culture and a ton of LSD.  The film is both dreamlike and impeccably designed in a way that isn’t real life… it’s cinema!!!

Oxford Professor David Pollack (Gregory Peck) is first offered a very lucrative translation assignment by shipping tycoon Nejim Beshraavi (Alan Badel) but turns it down.  In literally seconds Pollack is picked up by Hassan Jena (Carl Deuring), a Middle Eastern Prime Minister, and is told it is of the utmost importance that he take this job.  The very fate of the Middle East may depend on it.  As Pollack accepts the translation job he was not counting on falling in love with the beautiful and mysterious Yasmin (Sofia Loren) who has her own secrets.  As things evolve into a web of intrigue and murder Yasmin and Pollack begin to see there is more to their relationship than lies and deceit.

Part of the pure joy of watching this thriller is the purely cinematic storytelling conventions it relies on.  The chance job that turns out to have worldwide consequences.  Love at first sight.  Twists. Turns.  Greggory Peck on LSD.  Sophia Loren dressed impeccably by Dior all the time no matter what the occasion.

This is not a bad thing.  In fact, it is exactly what this type of material needed.  It is what is sorely lack in the Robert Langdon series (re DaVinci Code).  Those films never imbued themselves with any sense of stylish fun.  The seriousness of those adaptations only accentuated the ridiculous and stupidity of the storytelling.  Much of this film has been lifted for those books and films in fact.  One just wishes they had taken the right pieces.

Arabesque treats everything lighter than air, even when it’s assassinating political figures.  It’s all done so stylishly and with the charms of its stars Sofia Loren and Greggory Peck you can’t help but fall for its charms.

The newly recorded commentary by Historians Howard S. Berger, Steve Mitchell, and Nathaniel Thompson.  The track begins with both saying it is “post-pandemic” and that Arabesque is closely hue to Donen’s Charade, and the author dropping acid/LCD.  Some of the details include how this film and films of similar ilk labelled “Hitchcockian” really weren’t, Peter Stone’s rewriting of the film like he did for Charade but did not get credit for here, the brutality of the film and other thrillers of the time, the themes of the film, Donen’s life as an expatriate living in the UK for 17-years, the influence of the James Bond series in this film and 1960s in general, the costly development of the script from the novel it was based on, the amazing art direction of the film and Stanley Donen films in general, the work of Sophia Loren and Greggory Peck, the criticism at the time that Peck was miscast, the style of the film, the work of Henry Mancini here and his career in general and his composition on the pop charts, a great mini-dissection of Two for the Road (another great Donen film), how this film affected his next film (which was Two for the Road), the work of Donen not just as a director but behind the scenes with crews, his actors, the writers, et. al., and much more.  Berger, Mitchell, and Thompson are a three-headed-hydra of film history and continue their very entertaining and super informative deep dive into the forgotten films of the 60s, 70s, and 80s.

Music by Mancini (9:33) – is an archival featurette with Henry Mancini and Nationally Syndicated Columnist Leonard Feather.  The featurette looks at Mancini’s career and life with some great behind-the-scenes footage of composition.

Poster Gallery (2:31) – is a gallery of 23 poster images from various countries set to Manici’s playful title credit music.  There is, unfortunately, no way to navigate through the gallery only the ability to pause on an image.

Kino Lorber’s Blu-Ray of Arabesque is out September 21st