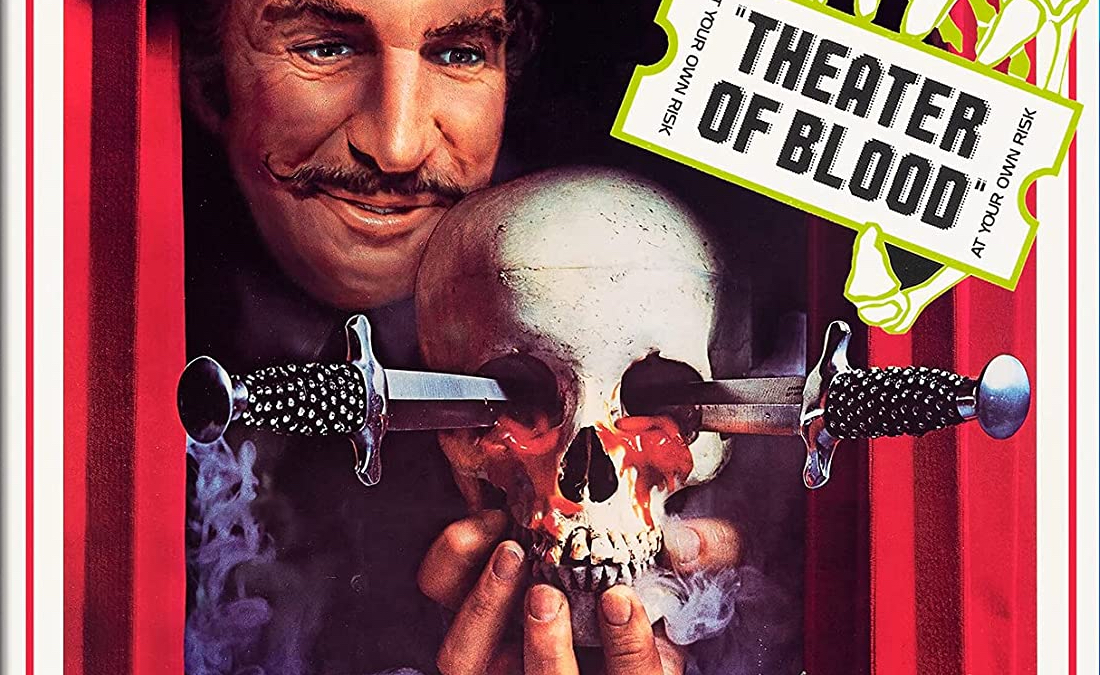 Vincent Price is having the time of his life taking lives in Theater of Blood.  Kino Lorber is rereleasing one of Price’s Best.

I was late to Vincent Price.  I loved him in Thriller.  I loved him in his collaborations with Tim Burton.  But I never went back to see how we got to where we did in the 80s and 90s with the iconic Screen Legend.  That was until DVD and the release of Price’s older films on the format gave me the reason to do so.  It was Theater of Blood that struck me as the perfect balance of gore and laughs in the mid-to-late Price era.

Theater of Blood with its premise of Actor killing the critics that denied him the Award he felt so rightfully deserved could have been an ugly affair.  One that made Price’s aptly named Edward Lionheart the saintly hero and the Critics being nasty little devils.  Price creates a character that’s as egomaniacal as he is arched in his acting.  As Lionheart Price relishes both the chance to do some of the best moments of Shakespeare and play the villainy of revenge.

As much as Price aids in the story of revenge the ensemble of actors playing the Critics bring a similarly arched and knowing tone to their performances.  It is a who’s who of the 50s and 60s British Acting Royalty.  Ian Hendry, Harry Andrews, Robert Coote, Michael Hordern, Robert Morley, Coral Browne, and Jack Hawkins are some of the luminaires of London Stage and Screen that relish in playing the Critics that so harshly judged Lionheart.  None of them phone it in, giving charmingly fun performances.

Though the film’s MVP is Diana Rigg as Lionheart’s daughter.  The way that Rigg approaches the role and what they required her to do is nothing short of fantastic.  One cannot actually discuss the nature of the role until they have seen it.  Needless to say, any other actor may have balked at what the story required them to do.  Not Rigg.  Rigg appears to be relishing every moment of the film.

The film is more of in the tradition of the Grand Guignol than Saw.  There’s a cheekiness to the gore and kills that make the film suitable for just about anyone.  Theater of Blood may not be as stately as Dragonwyck but it’s damn good fun.

The Transfer provided to Kino from MGM appears to be the same one that was given to Twilight Time.  It’s a solid transfer.  The image is sharp, and the color reproduction and contrast levels are both nicely rendered here.

The newly audio commentary by Alan Spencer is a delightfully deep dive into the creation of this unique horror film.  Spencer begins with a Shakespeare quote and dives into some of the silent film Shakespeare Adaptation.  Details include the original title of the film, various in-jokes and visual gags that allude to Shakespeare and stage, the various actors and how they were tied to stage and Shakespeare, the work of Anthony Hickox, the similarities between this and Dr. Phibes, Diana Rigg and her own run-in with Critics of Stage which she turned into a Stage Play, the Meth Drinkers (British term for Homeless Alcoholics that Price’s character uses), Diana Rigg’s film and television career, Vincent Price’s very progressive politics during his life, some great information about Richard III (which Price played in a Corman production), Price’s friendships with various stage and screen luminaries of the 40s and 50s, Price’s supposed descent below the A-List and his career resurrection thanks to films like this, actor Coral Browne relationship with Price, the many bad and good impressions of Vincent Price by various comedians and actors, Price’s love of cooking, and much more.  Spencer’s knowledge about the film, actors, and Shakespeare is bar none with an added sly wit.  It’s an excellent, deeply researched, and entertaining commentary track.

The second audio commentary is an archival one (taken from the Twilight Time Release) by historians David Del Valle and the late great Nick Redman.  This track originally appeared on the Twilight Time Blu-Ray.  Details include how Price came onto the project, the opening title sequence, his never being able to perform Shakespeare on the stage, Price’s love of this project and eventually film, co-screenwriter Anthony Greville-Bill interesting life before becoming a writer, the career of Douglas Hickox, the differences similarities between Theater of Blood and Indominable Mr. Phibes, songs that were produced for the production and sung by Rigg but never released, the cooking show in the UK starring Price during the filming of Theater of Blood, the life and career of Diana Rigg, some great anecdotes of the various legendary actors that were cast in this film, Price’s TV Appearances, the staging of the Shakespeare plays in the film, Price’s return to the stage after Theater of Blood, Price finding kinship with the legendary British actors he worked with on the production, a great story about Gregory Peck in The Omen, Price’s one-man show about Oscar Wilde, how much has changed in London from this film in the 1970s (which wasn’t the case from the 40s to the 70s), the “grey listing” of Vincent Price during the 50’s Witch Hunts and how that effected his career, how he came to work with William Castle and AIP/Roger Corman, the relationship and life between Coral Brown and Vincent Price post filming, a very personal letter Price wrote about Coral Browne, and much more.  Del Valle and Redman have a great deep dive conversation about this film truly special film and Vincent Price as Del Valle was a close personal friend of the actor.

TRAILERS FROM HELL with Alan Spencer (3:33) – Spencer provides a micro-commentary for the trailer of the film.

Theater of Blood is a truly wonderful film anchored by Vincent Price at his best.  Highest possible recommendations!