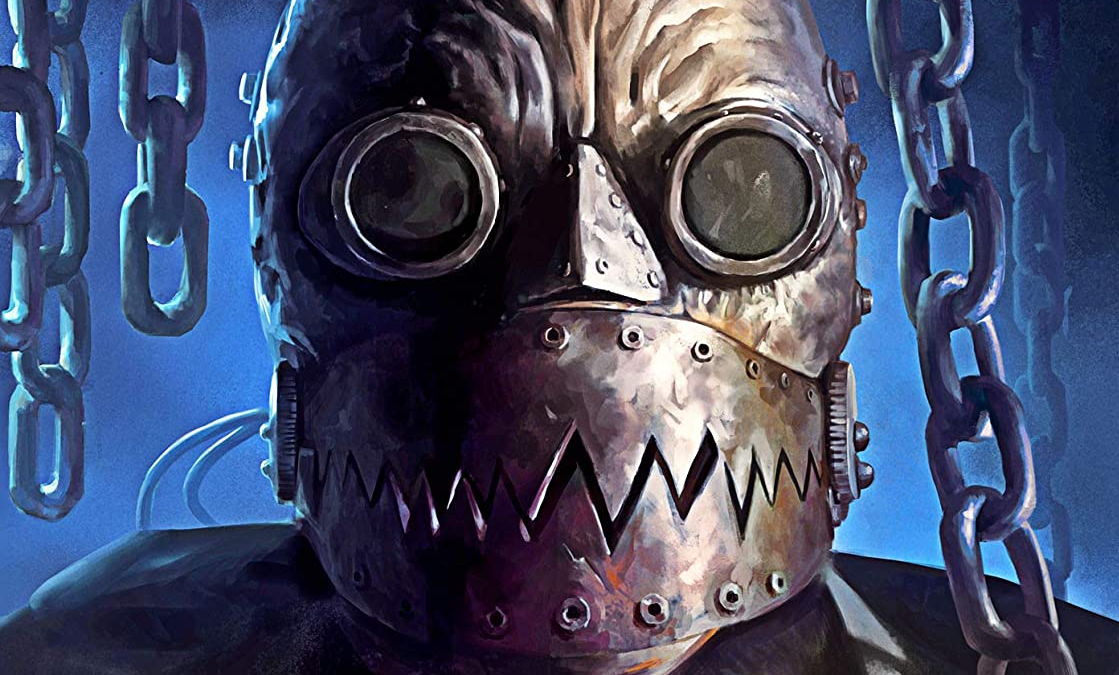 Skinned Deep is the Carnival of Horrors Arched Pitch-Black Comedy that you’ve been searching for.  Severin Films has restored another instant cult classic ripe for rediscovery.

It is always the films we find, sometimes decades, after their initial release that are truly worthy of our discussion and adoration.  Gabe Bartalos’s feature film debut Skinned Deep is one such film.

The Rockwell Family is on vacation.  We already know this particular story.  Their van breaks down “accidentally”.  They seek help at the local diner/gas station only to be kidnapped and murdered by a family of mutant serial killers.  The lone survivor (Karoline Brandt) is only kept alive because one of the “sons” Brian (Jay Dugre) has taken a liking to her.  It is only so long before our Final Girl attempts her escape incurring the wrath of Brian’s family that includes the likes of Plates (Warwick Davis) and the Surgeon General (Aaron Sims/Kurt Carley).

Gabe Bartalos has taken the cliché setup from dozens of horror films (take your pick from infamous works by Wes Craven, Tobe Hooper, Rob Zombie, and other horror alumni that used the very same framework) and put his own unique stamp on it.  The DIY aesthetic is a perfect complement to the 16mm shot production.  Oftentimes these types of choices produce a cheap look which is NOT the case in Skinned Deep.  Bartalos is an FX designer by trade which aids the film’s visual look as there isn’t a single FX/Set piece that doesn’t look perfectly rendered/designed.

Just how much one with fall in love with Skinned Deep will be dependent on not only your love of the horror genre but of the specific subgenre of mutated serial killing families.

The 2K transfer from the original negative is beautiful.  It feels like a broken record when discussing Severin Films’ amazing restoration work.  They truly do revelatory work on their titles.  Skinned Deep is no different.  The 16mm windowboxed (1.33) image is beautifully rendered with the same sort of care that Bartalos took to make this film.  The handsome sharp image looks as what one would expect from a well taken care of 16mm negative.  For this reviewer’s money, the film’s grain structure is the real hero here with Severin always making sure that the grain is never overpowering but present in a way that enhances the image to that filmic look only 16mm can achieve.

The archival audio commentary by Gabe Bartalos, Actors Karoline Brant and Jay Dugre, and CGI Artist Al Magliochetti is an informative track.  Details include how they achieved the branding from the opening scene, how Bartalos’ genesis of the project and why it was independently produced, filming in Sun Valley and Sylmar (the latter of which is this reviewer’s hometown), the car accident that opens the film and how it was produced, who they cast as the Master, the effective use of CGI, the concept and execution of a “timeless” look, Bartalos’ working relationship and eventual friendship, a phoned-in conversation with cinematographer Pete Strietmann, the stunt work and shooting of the other family and the car chase, the production’s “schedule” and how it was put together, the Forrest J Ackermann cameo, and much more.  This is a very detailed group commentary track well worth a listen.

Deep Cuts: A Look Back on Skinned Deep (1418) – is an all-new behind-the-scenes making-of with comments by Writer/Producer/Director Gabe Bartalos, Actors Jay Dugre and Karoline Brandt, and Weapons Machinist Jake Lee.  Beginning with Bartalos’s discussion of how character design for make-up FX that he created that shifted over to world-building and creating a screenplay/world for those character designs to inhabit.  Details also include how they achieved that streaking scene in the middle of NYC, how Bartalos came up with the design of Surgeon General, how they created the blade/knife/primary weapon of Surgeon General, Bartalos relationship with Warwick Davis (with some great footage from Davis’s makeup application from Leprechaun), a discussion of Bartalos’s second film Saint Bernard (also available from Severin) and other films/projects he created after Skinned Deep, and more. There’s some great b-roll footage (from the archival making of also on this disc) and some interesting fan questions that Bartalos reads off during the featurette.

Archival ‘Making Of’ Featurette (22:20) – this archival making-of-featurette is a surprisingly thorough in-depth look at the production of Skinned Deep.  This is the sort of behind-the-scenes look we got on DVDs in the early 2000s with looks at make-up FX, the use of digital FX, and how all of the major set pieces were created.  For those interested in how Bartalos and Company achieved some of their more creative work should definitely take a look at this featurette.  Also of note, the interview with Warwick Davis is both surreal and hilarious because of when they interview him.

Trailer (2:00) – Severin has restored/created a trailer for the release

CD Soundtrack – a Severin Films’ exclusive that can only be gotten by purchasing directly from Severin’s website.  It was not included in my screener copy.

Severin Film’s Blu-Ray of Skinned Deep is out now