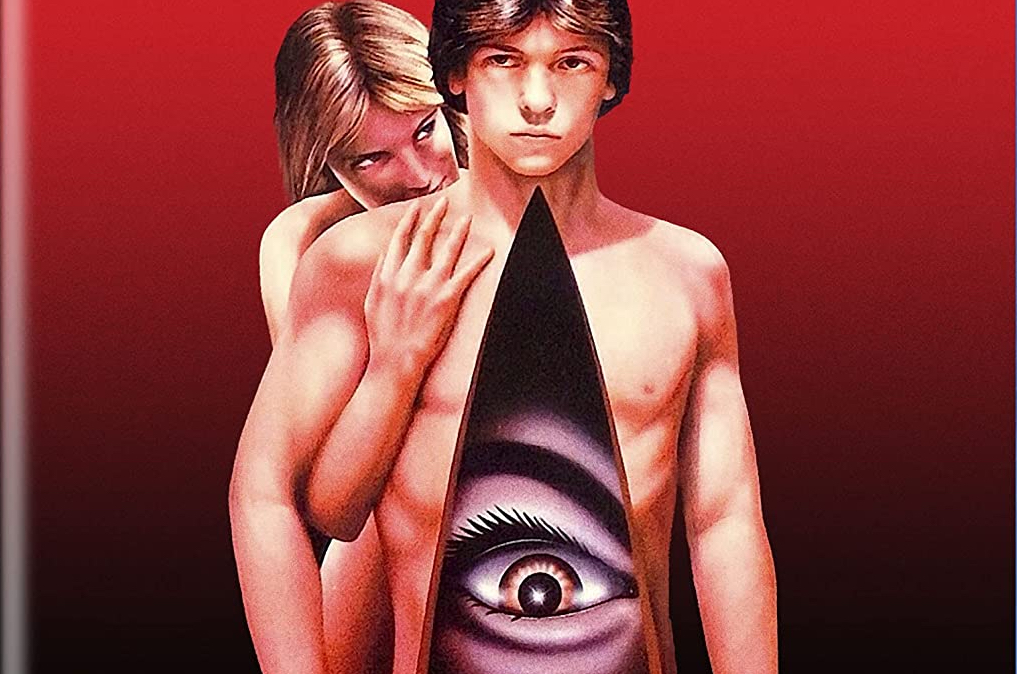 Sometimes we all go a little crazy sometimes… or in the case of Butcher, Baker, Nightmare Maker it’s all day every day.  Code Red’s long out of print Blu-Ray comes soaring back to life.

When people talk 1980s Slashers are insane, they’re talking about Butcher, Baker, Nightmare Maker.  The horror film is truly a delightfully bonkers sight to be seen.

Billy (Jimmy McNichol) is your average high school kid.  Bright future, great girlfriend (Julia Duffy), basketball star, and a loving Aunt Cheryl (Susan Tyrrell) who’s taken care of him since his parents’ death.  It doesn’t take long to realize Aunt Cheryl is off her rocker, even before she kills the TV Repair guy. To hear it from Cheryl all she wants it to protect her Billy. Though that protection won’t help the racist-homophobic Cop Joe Carlson (Bo Svenson) that’s on the murder case.  Carlson thinks that it was Billy, in some sort of heat of passion gay love triangle.  It only gets more complicated from here with Aunt Cheryl inching further and further away from reality as much as Carlson moves away from actual motivations for the killer.  It all ends with a climactic showdown with everyone with their own lunatic motives.

There is no real way to describe how fun and entertaining this all is.  There is an overheated lunacy in every step towards the inevitable climax and the one that you don’t see coming.  Screenwriters Stephen Breimer, Boon Collins, and Alan Jay Glueckman do a marvelous job of setting everything up within the two first acts that allow for the truly deranged to be unleashed in the third act.  The film isn’t haphazardly put together but a rather keenly aware and observed slice of horror mania.

The progressive point of view is another reason why this film works the way it does.  The way that the film deals with homophobia and Corrupt Racist Sexist Homophobic Fascist Cops are so modern one will be shocked.  More so than any of the leering nudity or Oedipal lusting done by Aunt Cheryl, both of which seem to be standard in these types of slashers.  Thankfully, Butcher, Baker, Nightmare Maker when making choices always seems to side on the adroit version rather than the lowest common denominator.

The 2017 2K Scan from the Original Camera Negative is fantastic.  The image is clear, sharp, and has great color reproduction that bests any other versions released prior.  That said this was previously released as a Diabolik DVD exclusive in 2017 with the same transfer.  Note this version appears to be the very same beautiful transfer and Blu-Ray that Code Red put out.  Which is not a bad thing.

The archival commentary with Seven Brimer and Alan Jay Glueckman hosted by Nathaniel Thompson is a solid entertaining track.  Details include the genesis of the project, the opening stunt work, the development of the script with various writers, the casting during a SAG strike and the various actors that were almost cast, the casting and work of Bo Svenson, how the film was one of the first of the slasher films, the casting and work of Susan Tyrell, the casting and work of Jimmy McNichol, the “gay panic” aspects of the film, the LBGTQ character in the film, the Oedipal themes in the film, the director William Asher and his very different filmography, the various titles and title changes made, the rising of the film in cult status thanks to VHS, the electronic score by Bruce Langhorne, the continue bludgeoning of the Julia character, the ending and quite a few anecdotes about the production and the freezing weather, and much more. Thompson is a great host prompting a great conversation about the making of the film.

The second archival commentary with Jimmy McNichol hosted by Jeff McKay.  Details include the different directors and directors photography (which was Jan De Bont), how McNichols was cast in this film and others because of his Manager (who was THE Jerry Weintraub) and wanting to get into Film, how he started his career on Gunsmoke and other work that finally led to this, working with Susan Tyrell, the various “teen” magazines were on set to interview him, the huge age gap between him Duffy and Paxton, working with Paxton, how Duffy and Tyrrell were only 6 years apart, his relationship with Tyrell, the Oedipal themes in the film, the various TV series he was on, how he worked in TV and Music and his touring with people like David Cassidy, Leif Garret and more, the failure of the film, working with the various actors, the production, and much more.

After a long absence, it’s great to have Butcher, Baker, Nightmare Maker back in print on Blu-Ray.  Highest Recommendations!!!