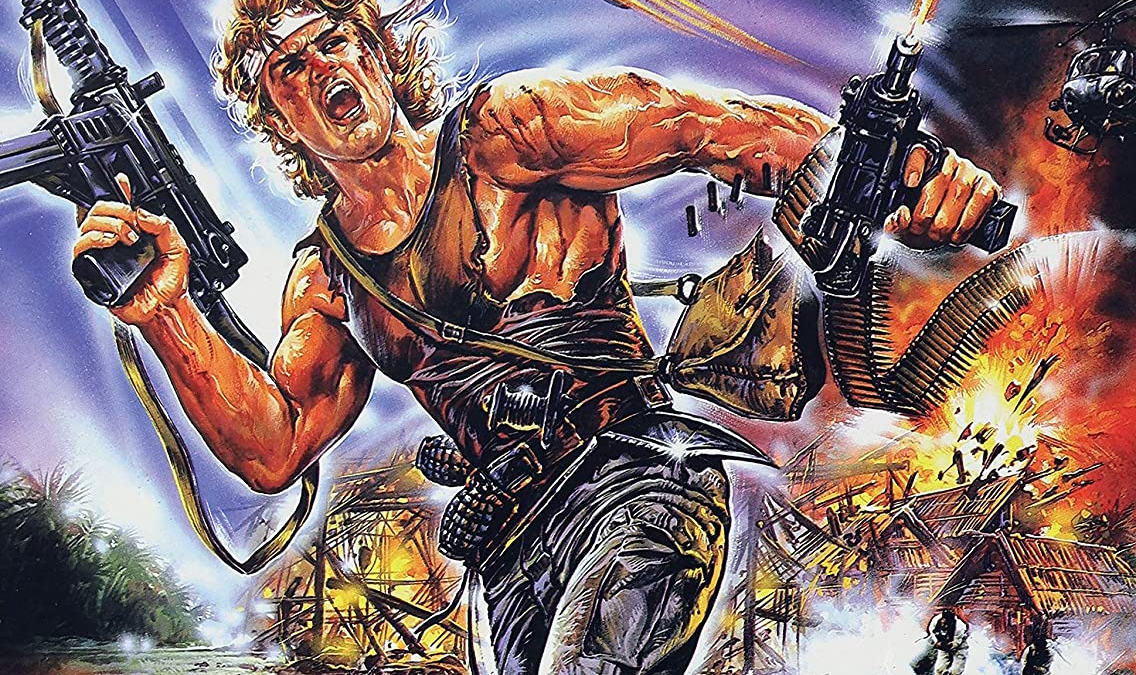 Severin Films continues to find the deep fried gold classics.  The sequel to Strike Commando may not have Reb “Jakodaaaaaaaaa” Brown but it has Richard Harris and a lot of outright theft from other genre classics.

What do you do when you’re Rambo knock-off becomes an unexpected hit? Well if you’re Claudio Fargasso and Bruno Mattei you Frankenstein the shit out of Raiders of the Lost Ark, Romancing the Stone, Lethal Weapon and of course Rambo (this time more Rambo and the Forces of Freedom than First Blood or First Blood Part 2) to produce Strike Commando 2. Throwing in Richard-freaking-Harris for good measure. The results; God-level sequelness.

Michael Ransom (now Brent Huff) is back in action.  This time it’s drug dealing, the CIA, money, The KGB, a woman that owns a bar, and much more that Ransom has gotten himself tied up in.  It all begins when Ransom thinks he’s been fired to find his former Commander (Harris) who is being held by drug dealers.  Ransom gets more than be bargains for as he’s thrown into the middle of a drug war that his Commander may or may not have been involved with. Ransom is aided by a feisty Bar Owner (Mary Stävin) who after her bar in the middle of Vietnam is destroyed is along for the ride.  Lots of explosions, helicopter chases, truck chases, and machine-gun fire later it all comes down to Ransom having to face off mano-a-mano, in the rain no less, against a villain that’s clearly modeled after Toth in Raiders of the Lost Ark.

Part of the fun and madness of Strike Commando 2 is the sheer audacity that the film blatantly ripping off the du jour action films of the era.  It’s no doubt that Mattei, Fargasso, and Drudi have multiple screenings of Raiders of the Lost Ark, Romancing the Stone, American Ninja, and Lethal Weapon.  Taking bits and pieces they felt best to use in the sequel.  Though the film is essentially stitching together of the greatest hits of action films of the 1980s it doesn’t feel cobbled together.  There is a sense of storytelling that makes it all it’s own.

Strike Commando 2 in its own way is a perfect summation of 80s action films.  All the excess and over-the-top lunacy of the coke-fueled action films of the era are perfectly summarized here in a way that only someone like Bruno Mattei could do.

The comments about Strike Commando equally apply to Strike Commando 2.  The fine folks at Severin are true magicians turning what some see as lesser films and giving them the treatment that Criterion gives to the most acclaimed titles.  The handsome image looks as close to reference quality as one could ever imagine.  The image is razor-sharp with solid blacks and contrast levels.  The grain detail is beautifully reproduced.  Nary a scratch or blemish during the entire runtime.

Note: the extended edition is the only choice when you view the film.

Guerrilla Zone (16:42) – is an all-new interview with Co-Director Claudio Fragasso.  The director is back discussing the sequel to the very successful Strike Commando.  Details include how they cast Richard Harris, the casting of Brent Huff, how he and Mattei shared directing duties, and much more.  Like his previous interview on Strike Commando, Fragasso is a charming delight with recounting stories and details from the production of the film.  In Italian with English Subtitles.

Michael Ransom Strikes Back (14:29) – is an all-new interview with Actor Brent Huff.  Beginning with his kill count (187 by his estimates) Huff discusses how he came onto Strike Commando 2.  Details include being cast but not knowing in what, working with Richard Harris, not meeting Mattei until the start of the production – not being able to communicate with him, the shooting of Zombi 4: After Death at the same time, how his girlfriend at the time was the lead of Zombi 4, the production’s devil may care attitude, doing his own stunts, working with Mary Stävin and their friendship, a stunt into still water that caused a major issue, and more. Huff has some great stories from the production and beyond.

Trailer (2:40) – Severin has either created or reproduced the trailer using their restored elements but using the title Tappola Diabolica.  As crazy as the trailer for Strike Commando.

Strike Commando 2 is everything you want from a sequel; bigger, crazier, funnier.  Severin continues to bring us the deep-fried gold.  HIGHEST POSSIBLE RECOMMENDATIONS!!!