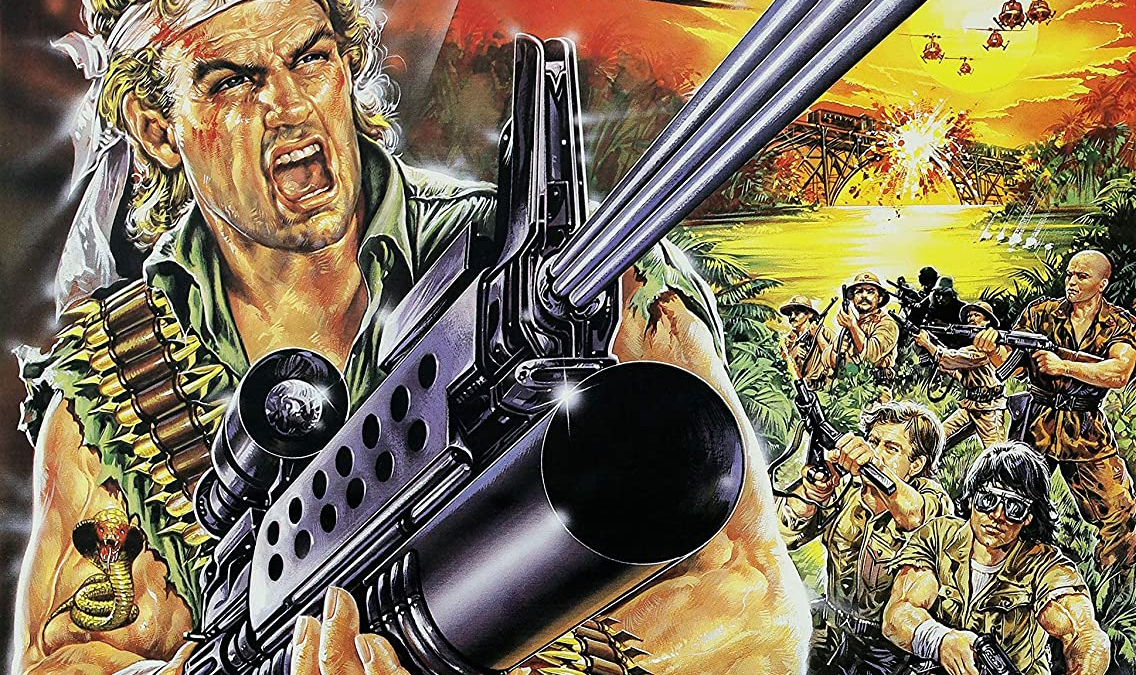 Only in the 1980s, a treatise against the Vietnam war could be turned into an anthem for the Republicans.  Bruce Springsteen’s Born in the USA begat shockwaves throughout pop culture as much as anything else.  It queued the rise of Vietnam War exploration.  Platoon tried to show us the cost of murder. Rambo: First Blood Part 2 literally rewrote the war to give us a win.  Leave it to the Italian genre filmmakers, specifically the dynamic duo of Claudio Fargasso and Bruno Mattei to take all this and put it into a blender to produce Strike Commando.

Michael Ransom (Reb Brown) is the leader of Strike Commandos and the elite force of the US Army.  A botched mission (is there any other kind) has left Ransom on his own and his team dead. You can’t keep a good ‘Merican Special Forces Soldier down though. Not when they’re helped by rebel villagers that include a kid who dreams of America, a beautiful Rebel, and an Ex-French Soldier (Luciano Pigozzi). Ransom radios in for help for not only him but the rebels, because you know Freedom for all! They try to get to a rendezvous point set.  Of course, Ransom’s march to freedom and America is stoped by the only thing that could stop it; The Russians. The Russians take the form of the menacing Jakoda (Alex Vitale). The stage is set for Ramb… I mean Ransom to face off against the evil Russians, Viet Cong, and even his own government leaves Ransom no choice but to unleash hell.

To say Strike Commando is just another ‘Namsploitation/Rambo rip-off would be the understatement of the century.  Mattei and Fargasso have created a warped piece of deep-fried action lunacy.  One where Disneyland is described as a place that has plants that grow candy and a magic genie that grants you your wishes. It’s as though the two along with screenwriter Rossella Drudi took everything they knew about America and American culture through films and a huge dollop of “making this shit up”.  The results are charmingly crazy to anyone from the US or have been to Disneyland.

This is not to say the film is bad.  In fact, Strike Commando in all its lunatic glory is top-tier ‘Namsploitation.  It may be a carbon copy of First Blood Part II but it’s done through the gaze of Italian Genre filmmakers that love to blow things up and have zero care of any sort of realism.  The film is better for it.  We are better for it.

Strike Commando is a brilliant piece of gonzo action cinema.  You’ll laugh.  You’ll cry.  You laugh some more.  You’ll be baffled.  You will be entertained.

Severin has done it again.  They’ve taken rusted brass and turned it into solid gold.  Strike Commando’s transfer is near reference quality.  The image is razor-sharp with solid blacks and contrast levels.  The grain detail is beautifully reproduced.  Nary a scratch or blemish during the entire runtime.

Note: there is no choice, you have to watch the Extended Cut of the film.

War Machine (19:45) – is an all-new interview with Co-Director Claudio Fragasso. Fragasso is an utter delight in this interview.  The details include how they ended up producing films in the Philippines, the humble origins of the film as a Rambo rip off, how Coppola filming Apocalypse Now set up people being professional stuntmen, cameramen, and everything else, Bruno Mattei’s contributions, and the cost-cutting methods, Luciano Puggozi who as an actor and the intermediary with the Filipino crew, a great story about a dinner gone awry, the help they received from the Philippine Army, and much more.  Fragasso has so many good anecdotes that this review won’t ruin – yes, including the amazing explosions. In Italian with English Subtitles.

All Quiet on the Philippine Front (13:11)– is an all-new interview with Screenwriter Rossella Drudi.  Drudi just like Fragasso is a delight of an interview.  The writer begins by discussing her love of Action films and how she became attached.  Details include Bruno Mattei’s insistence that Drudi continually rewatch Rambo: First Blood Part II, how Mattei wanted her to literally copy dialog from that film, her argument against ripping off the film, her takeaway from the Rambo series, and what she brought to Strike Commando, the unexpected success of the film and more.  In Italian with English Subtitles.

STRIKE COMMANDO In-Production Promo (2:32) – with a voice-over that’s both overheated and dull is pretty great including scenes not included in the film.

Trailer (2:05) – Severin has created a trailer using their restored elements.  The results; a truly wonderful piece of lunacy you won’t soon forget or at least forget the name Jakota!!!!!!

Severin’s Blu-Ray Edition of Strike Commando is out now