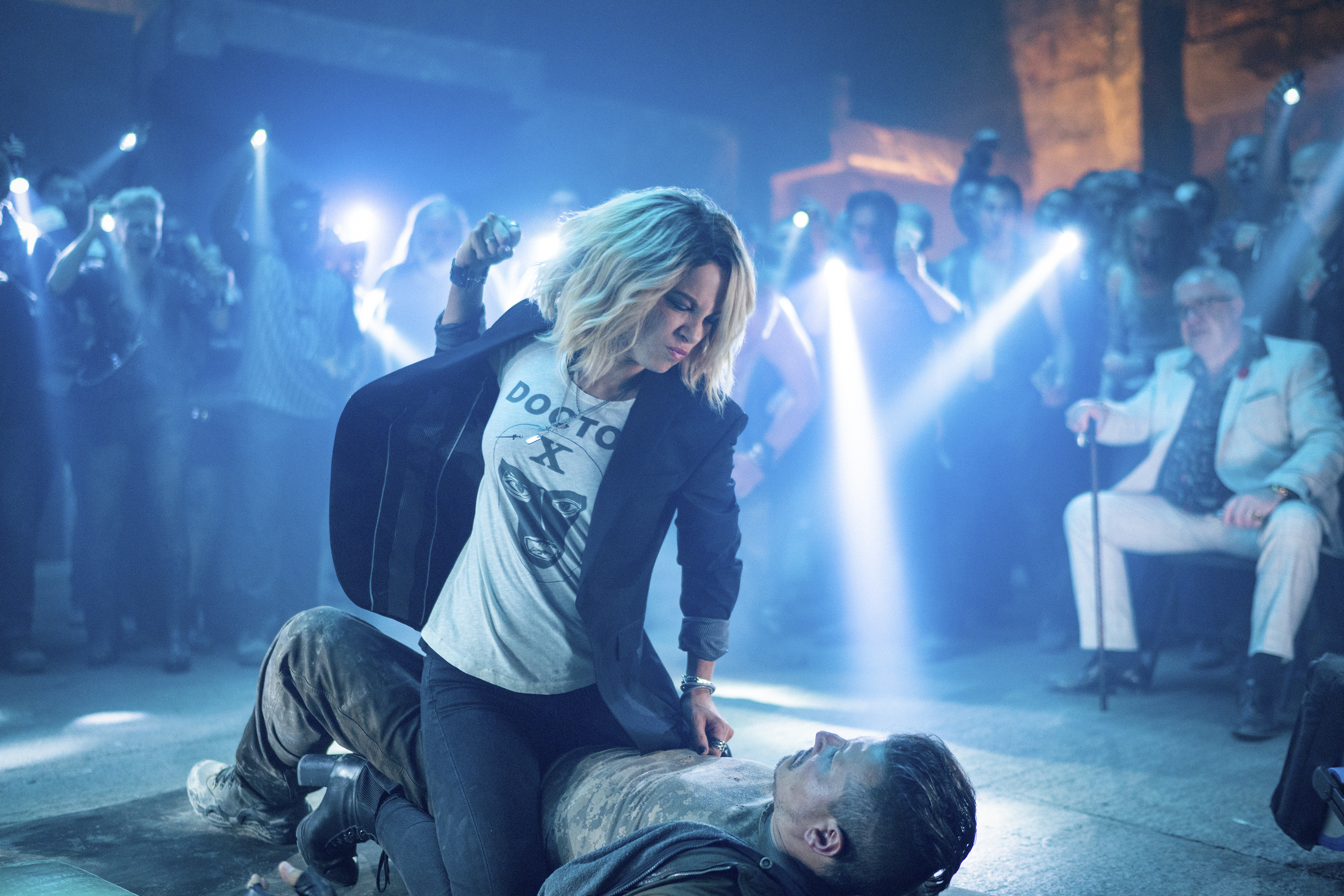 Kate Beckinsale is back doing what she does best, kicking ass.  Also, bringing a new skill set, throwing babies.

Jolt is an action vehicle designed for its star and to showcase what most of her vehicles never did; her dry wit and sense of comedic timing.  Director Tanya Wexler gives us a stylish and funny action thriller that will entertain.

Lindy (Beckinsale) is not your average woman.  Along with all the normal things you’d expect from an upwardly mobile woman she also harbors a secret.  The secret: a rare lifelong neurological disorder that can send her into a murderous rage.  Obviously, she was tested, poked, prodded, and eventually put into the military because of this “gift”.  Cut to decades later she is still dealing with this particular disorder until her life is turned upside down by a lover’s demise (Jai Courtney).  Lindy tries to get answers the best way she knows how… using her “gift” to figure out who is behind it all and what they want from her.

Beckinsale since the mid-to-late 90s run with Whit Stillman has always been a force tittering on stardom or in the throes of stardom.  What has never been taken advantage of during those stardom time periods of her comedic talents.  Often, her roles were unhumorous WOMEN OF ACTION without any sort of character development beyond “she tough”.  Jolt corrects this by giving Beckinsale some of the sardonic dry wit that anyone that has seen her in early work or in interviews knows naturally is a part of her.

This isn’t just standalone to Beckinsale.  She’s given ample support with Stanley Tucci, Jai Courtney, Lavern Cox, and Bobby Carnivale all turning in lively performances that support Beckinsdale as much as they’re their own thing.  Carnivale and Cox in particular are hilarious as buddy cop duo.  Tucci is incapable of being bad in anything and gives his charming persona throughout the film.  Courtney continues to prove that people did not know how to use him initially and if given the right role creates a strong presence.

Jolt would not be what it is without Scott Wascha’s witty script and Wexler’s stylish direction.  Wexler’s brings the same sort of clarity and forcefulness that she brought to the character-based comedy of her 2019 feature Buffaloed.  Here Wexler’s chops for comedy are only eclipsed by her affinity for action.  Wexler with cinematographer Jules O’Loughlin, supervising stunt coordinator Greg Powell and fight coordinator James Grogan create set pieces and fights that are impactful, stylized, and best of all funny.  Wexler and Wascha seem to understand that an action-comedy needs both to be successful.

The only drawback to Jolt is its assumption at its end where a major actor shows up (well they do narrate the entire picture) to set up an inevitable sequel.  Though this drawback is minor, if you are as charmed as this reviewer by this unexpected action film, its ending will leave you wanting a sequel.  If for just the very fact that Beckinsale has found a role that is perfectly suited for her strengths as a performer.