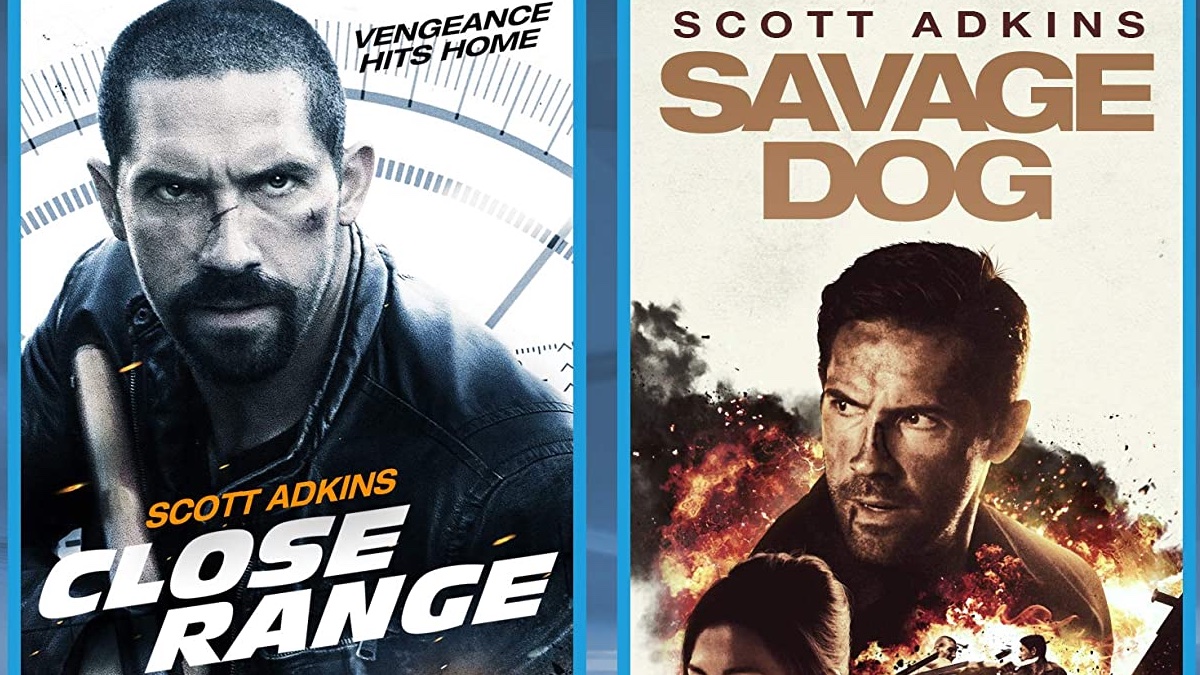 MVD gives us a double dose of B-Movie Kick-Ass with the Scott Adkins starrers Close Range and Savage Dog.

Adkins teams up with one of his best directors Isaac Florentine to make a Siege film that’s more Spaghetti Western than it is John Carpenter.  As Colt McCready, gotta love that name, Adkins is a no-nonsense ex-Marine Recon with ass kicker-y on the mind.  We’re thrown into the middle of the story as Colt saves his niece after being kidnaped.  We find out that he’s taken her back from a nameless Drug Cartel.  They go after him after he’s killed the head of the Cartel’s nephew.  Back at home his Niece Stepdad and Mother are waiting along with a corrupt Sheriff (Nick Chudlind at his grimy best).  Things get standoff-ish as the Cartel shows up at the McCready Homestead (it takes place in Arizona, but actually filmed in Santa Clarita California).  Adkins after a short set up with a few character beats is able to do what he does best; beat down dudes.

Florentine as a director does the smart thing by giving Adkins, the Stunt team, and Fight Coordinators room to breathe.  Every action scene and fight scene are leveled up because Florentine allows them to play out in longer uninterrupted shots.  Having someone like Adkins who is as much a Stunt performer as he is an actor is a huge benefit to the film.  The actor/director team has been doing this for so many films, they make it look easy when it’s anything but.

The film does have a fun Spaghetti Western-inspired score which is refreshingly different than your typical Siege film which normally takes their cues from Carpenter’s Siege films.  Even in the way, it’s executed is more western Rio Bravo than Assault on Prescient 13.  For someone who has seen a lot of z-grade Siege films (most of the bad-bad-bad), it’s nice to see something that is as precisely executed as this film is.  There is enough variety in the action that makes this solid entertaining.

Savage Dog takes the simple tried and true premise of a man with a checkered past in a new country finds love and peace only to have that disrupted and vow vengeance leveling it up with a few adroit storytelling and casting choices.  Writer/Director Jesse V. Johnson gives us everything we want from this kind of B-Level Action film.  Also a few others like eating livers.

At a certain point in your life as a film viewer you know the troupes, you the clichés, you know the touchstones of genre films and filmmaking.  Jesse V. Johnson seems to be a filmmaker that is also a viewer (you’d be surprised how many are NOT) and understands this.  Something as simple as Savage Dog is leveled up by his knowledge of the genre and those clichés.  It isn’t that he changes everything but skews them just enough to satisfy the money-people but also make him noticed by people who love the genre.

Part of the fun of the film is discovering what Johnson leans into and what he decides to push against.  One thing that will delight fans is that the film does not rely on CGI bloodshed and opts for squibs and practical Make-up FX.  Many will not think much of this but when the revenging starts… Holy Hell does the geysers of blood and chopped limbs start.  Adkins’ character essentially becomes a Slasher hacking away and exterminating his foes with extreme violence that will have gorehounds laughing with glee.

Extra points for casting Keith David as both Narrator and Adkins best friend in the film.

Both films are furnished with handsome-looking transfers.  The image is always razor-sharp and nary an artifacting issue.  This is huge considering that the films transfers are on one disc.

The Art of Making It (4:51) – is your standard EPK-Making-of with comments by Johnson and Adkins.

One hopes that this Scott Adkins double feature is the first of many for MVD.  Recommended!!!