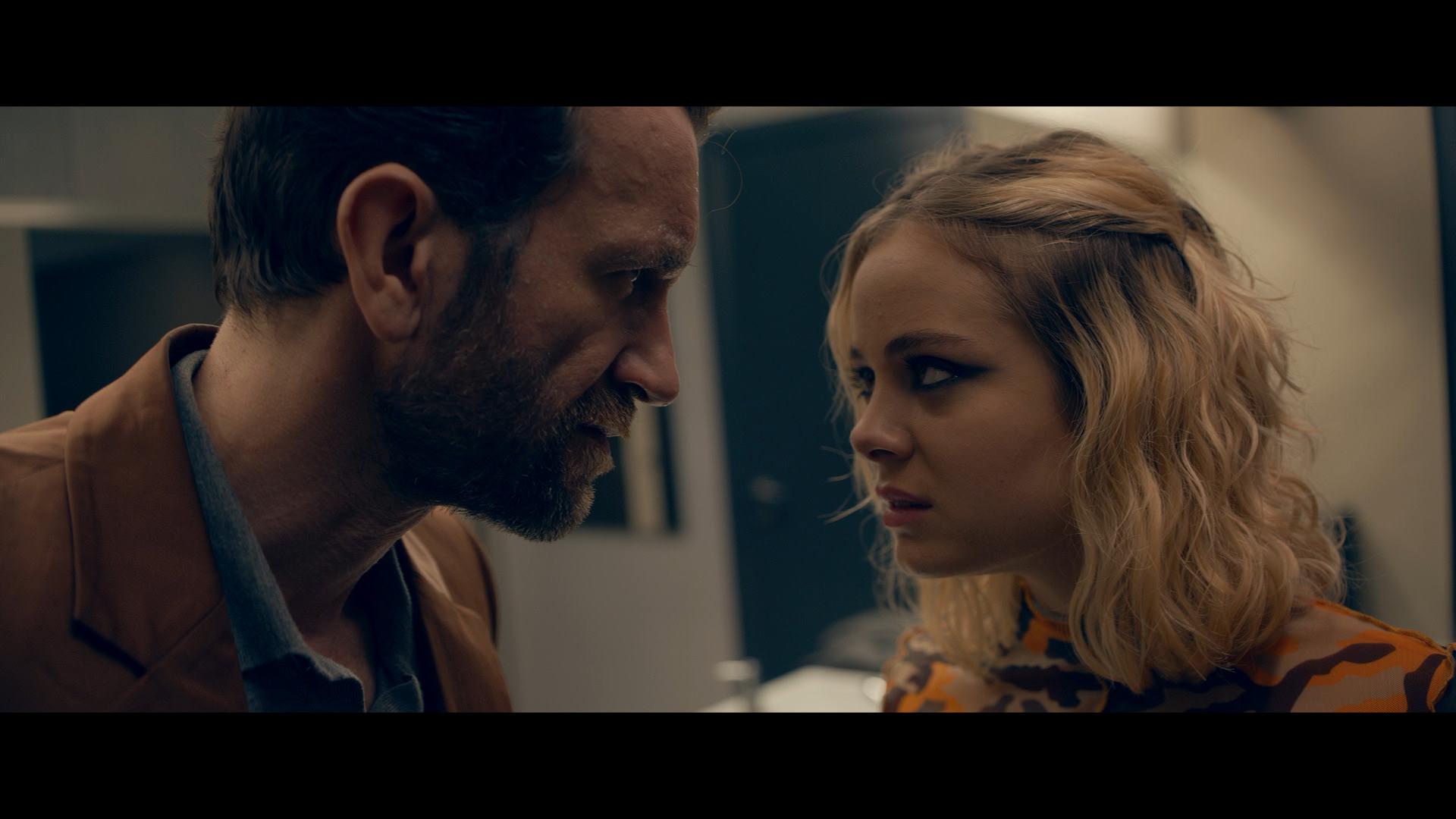 A sinister encounter between an architect and an annoying stranger in the confines of an airport lounge uncovers some deeply buried secrets. A Perfect Enemy stars Tomasz Kot (Cold War) and is the first English language film from director Kike Maíllo.

A highly successful architect ends his rather self-aggrandising talk with a quote from French writer Antoine de Saint-Exupery – “Perfection is achieved, not when there is nothing more to add, but when there is nothing left to take away”. He then hurriedly makes his way to the airport (which he built) to escape from the city which holds difficult memories for him. Events conspire to make him miss his flight, and he finds himself killing time in the executive lounge with an extremely annoying and talkative young woman who gets in his head and whose story intertwines with the architect’s more deeply than he first realised.

But perhaps a better quotation to illustrate the story, rather than that of Saint-Exupery, would be something else which the architect says – “A lie always needs to be repeated more than the truth to be believed”.

Based on the novel Cosmétique de l’ennemi by Belgian author Amélie Nothomb, A Perfect Enemy is mostly a two-hander, a weird search for perfection and truth, with the story framed in lengthy exchanges between the protagonists within the confines of an airport lounge. Polish actor Tomasz Kot (Cold War) plays the architect Jeremiasz Angust, and Athena Strates is the improbably-named Texel Textor, the young Dutch woman he encounters.

Strates probably has the trickier task to achieve. Texel’s moods switch swiftly and constantly; one moment she’s telling a gruesome story from her childhood, the next laughing maniacally at Jeremiasz’s response to her, or she’s threatening him in a low-key but ominous manner.  She achieves them all, and is a really unlikeable and extremely annoying character who keeps both Jeremiasz and the audience on their toes. Why does he put up with her intrusion? Why doesn’t he alert someone that she’s practically stalking him and won’t leave him alone?

The answer is simple. Despite all her grating chatter, Texel seems to have a way of getting inside Jeremiasz’s head. Kot portrays the architect as a calm, reserved man of means, the type who doesn’t want to engage with strangers in airports but is too polite to say so. Somehow though, Texel is able to burrow into buried secrets which Angust’s outward appearance keeps tightly restrained, and she eventually cracks the façade.

A Perfect Enemy is a gratingly sinister psychological thriller and is also exasperatingly wordy, two states which seemingly contradict each other. This may belie the literary origins of the story and yet might not have been as striking if most of the actors were speaking their native language. That’s not to criticise their English or their acting at all – but having to wrangle so much dialogue in a foreign language felt as if, for Kot in particular, it was slowing him down a little. A tad more ‘show’ and a little less ‘tell’ might have been a slightly better combination all around on the part of Catalan director Kike Maíllo, whose first film in English this is.

There are some beautiful visual touches involving the model of the airport extension on display within the airport itself, featuring Jeremiasz and Texel in ever-changing poses mirroring their actual situation throughout the film which contributes to the puzzling nature of the narrative.

The audience may or may not deduce the ending in advance but it is an engaging journey nonetheless. A Perfect Enemy is not exactly the perfect film, but if you can handle the wordy expositions, it’s intriguing enough to spend time with – perhaps not if you’re waiting to board a plane though.

A Perfect Enemy will be available on digital download from 5th July on Amazon, Google and iTunes