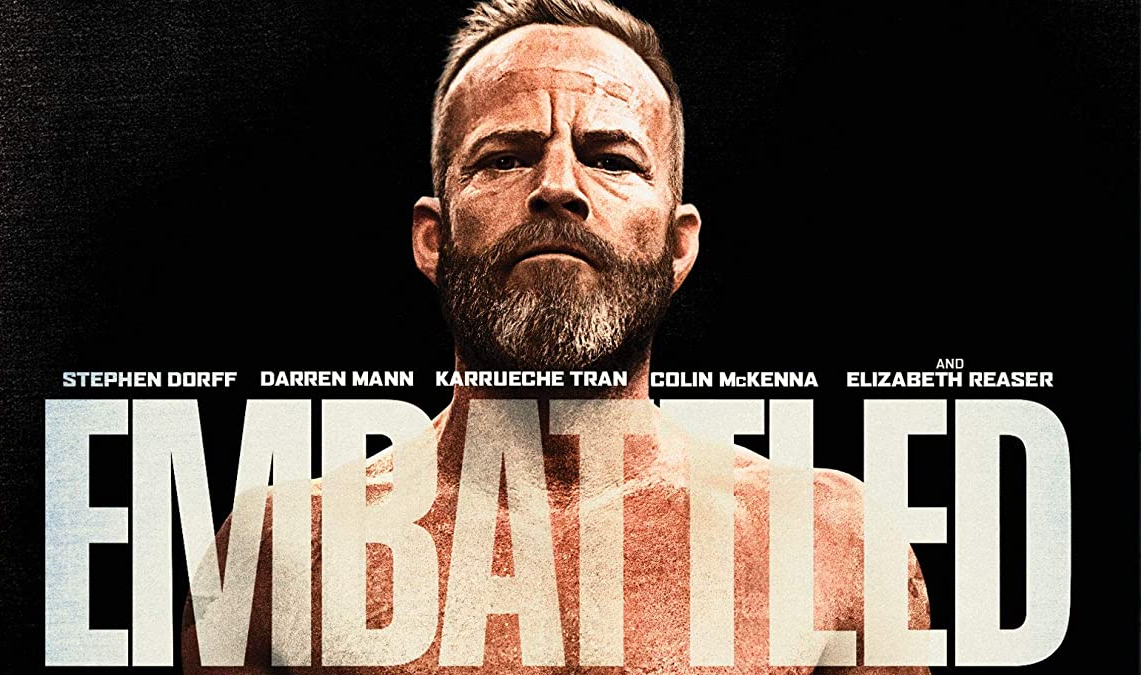 Embattled isn’t your ordinary Sports Movie.  The film lead by a searing performance by Stephen Dorff at every turn is more about character than the sport.  Shout Factory/IFC has brought this one to Blu-Ray and ripe for discovery.

Harder than any genre is the sports film.  The binary formula of “win or lose” is so baked into the genre that when a film defies conventions it can lead to something truly special. Embattled with its interesting dichotomy of hard edges and compassion combined with fewer conventions making this one something elevated.

From the opening moments, one realizes that Cash (Dorff) is one of the biggest pricks to ever grace the matt of an MMA ring/octagon.  His son Jett (Darren Mann) looks up to him and is the ire of his training tactics which borders on abuse.  Cash feels the harder he pushes the better Jett will be.  Jett cannot see what his loving mother (Elizabeth Reaser) or his brother Quinn (Colin McKenna) can see or any of us; Cash is an abusive alcoholic bully.

As Jett begins to rise in the ranks and spend more time with Cash he begins to remember more and more about his past and the incidents that lead to Cash divorcing his mother.  With Cash bullying his way into a mega-deal with the MMA Organization he fights for, it is only a matter of time before it all implodes and does so in spectacular fashion.  Only seeing his ego and the money Cash agrees to a father-son championship title match.  One that sets the groundwork for a truly epic battle between father and son.

Director Nick Sarkisov always sides on the character over flashy MMA-infused set pieces.  The film is better off for it.  Sarkisov understands the hard and soft of the piece and is able to transition from the dichotomy of Jett’s life of Fighting and Family life.  Though when the film does step into the ring Sarkisov and stunt coordinator Don L. Lee ensure that the impact is felt.  Fans of MMA should find delight in these expertly executed fight scenes spiked with realism.

Part of Embattled’s secret weapon is its uncompromising work by Dorff and the sharp adroit script by David McKenna.  McKenna’s work here is as mentioned above is starkly hard but equally compassionate.  Rather than spending time on the dynamics of MMA and the ring politics, McKenna has crafted a dueling character study of a Father and Son.  Within those two plots, McKenna is able to show us how a family is broken by abuse and alcohol but never preaching or feeling like it’s a crass movie-of-the-week cliché.

Dorff’s Cash is not the kind of father looking for redemption that’s become the stereotype in the genre not even close to it.  Much like DeNiro’s abusive father in A Boy’s Life, Dorff is uncompromisingly ugly as the aging MMA Champion.  Like DeNiro, there is a magnetism to Dorff’s work that makes for a compelling performance.  The actor has always reveled and flourished with roles that required a darker side and here he’s found a complex role that isn’t two-dimensional.  The script thankfully never gives in to the “well… he’s actually a good guy” trope that some of these roles can turn into.

Going toe to toe, forgive the pun, with Dorff is Darren Mann as Jett.  Mann has the tougher role as the son who is trying to do live up to the machismo of his father but beginning to realize that maybe his father isn’t a good man.  The way that Mann is able to slowly turn the realizations and emotional blocks into something that doesn’t feel tired is a testament to the ability of the young actor.  Adding to the fact that Mann convincingly plays an MMA fighter only makes his performance an equal to Dorff’s.

Embattled’s refusal to lean into the troupes of the tried-and-true sports movie formula separates it from the heard and will no doubt find a loyal fanbase.

Shout Factory/IFC has furnished this Blu-Ray with a handsome, sharp transfer.

Rounding out the special features is a Theatrical Trailer (2:27)

Embattled is a solid sports drama that is sure to surprise fans of the genre and those that are not.  Highly Recommended!

Shout Factory’s Blu-Ray of Embattled is out now