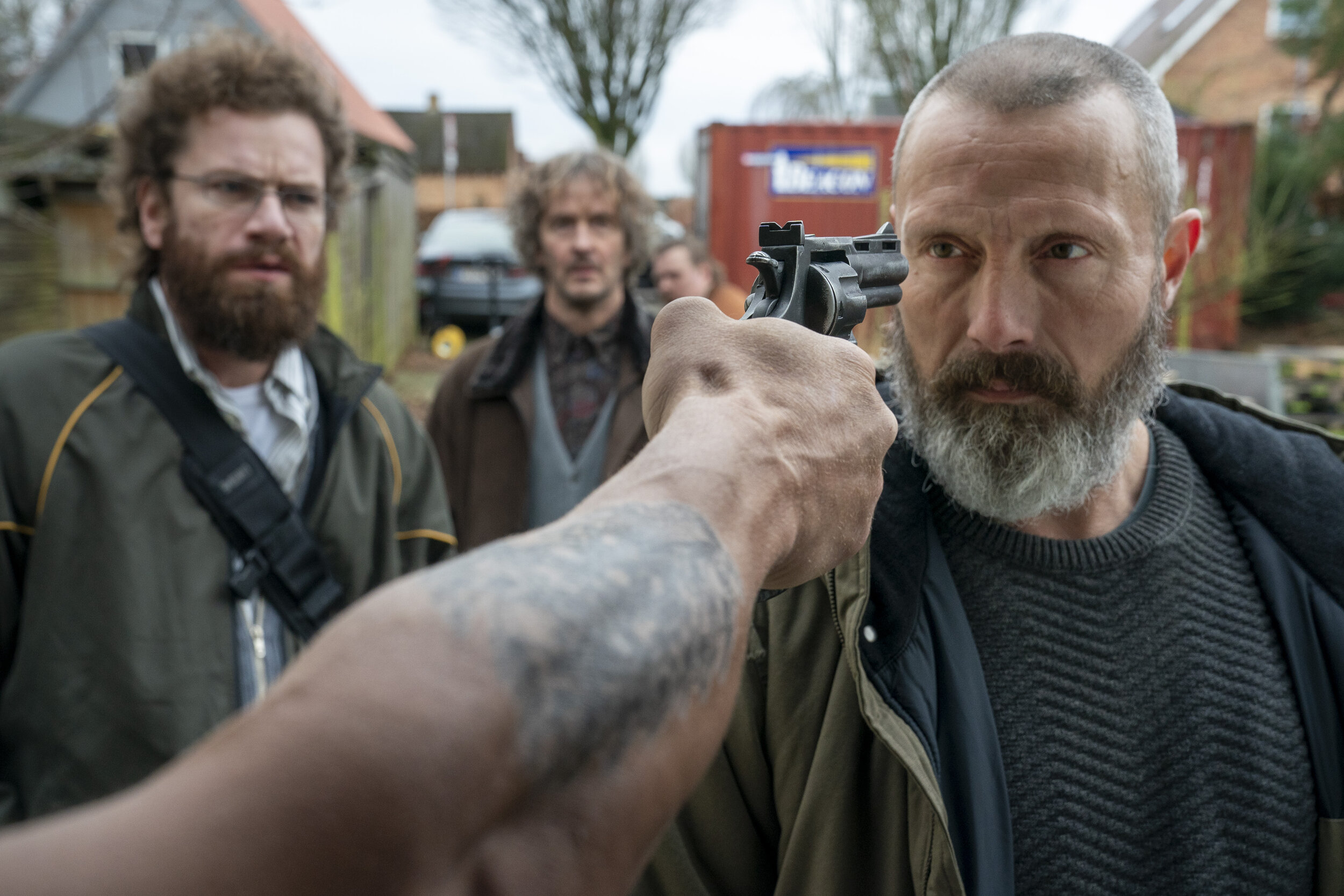 Riders of Justice is one of the best films of 2021.

What starts out as a setup for a Liam Neeson action film becomes so much more humane and darkly comedic. Writer/Director Anders Thomas Jensen and Star Madds Mikkelsen give us one of the best films of the year.

After what appears to be a tragic subway accident Markus (Mikkelsen) is sent on leave from his military post to help care for his daughter Mathilde (Andrea Heick Gadeberg). That accident is not all as it appears.  Otto (Nikojlas Lie Kaas) who was also on the subway at the time begins to find things are not adding up.  A Mathematician by trade Lennart adds up the probabilities and finds this was no accident but an act of violence to help the motorcycle gang Riders of Justice kill a witness.  Markus now has a target for his grief.  But he’s going to have to take Otto, Lennart (Lars Brygmann), and Emmenthaler (Nicolas Bro) along if he’s going to figure out specifically who was involved.

Riders for Justice is more than a simple tale of revenge.  Writer/Director Jensen takes what we think will be a conventional story and zags at every moment we think he will zag.  The fifth collaboration between Mikkelsen and Jensen finds what may be their most successful.  The director plays to all of Mikkelsen’s strengths as a performer allowing Markus to be a fully realized character with both good and bad in him.

The film is designed as a character piece within an action thriller conceit giving way to an ensemble cast that does some truly inspired work.   Andrea Heick Gadeberg stands toe to toe with the entire cast included Mikkelsen as the grieving teenage daughter who finds the most unexpected of families during the course of the film.  Mathilde is not some caricature of a teen but a fully realized young woman shell shocked and trying to cope with a sudden tragedy that leaves her rudderless.  The moments between her and Mikkelsen are equal parts heartbreaking and morbidly funny.

The trifecta of Lie Kass, Brygmann, and Bro as Markus’ accomplices are the three-headed hydra of comedic and dramatic gold.  It shows how unselfish a performer Mikkelsen continues to be that each of these men does not just get one moment to shine but is given the run of the film.  The way they interact with not only each other but Mikkelsen is the unexpected heart and refreshing levity of the story.  The moments at Markus’ farm as Otto, Lennart, and Emmenthaler are attempting to hatch their plans are some of the most surprisingly comedic of the last few years.  More so if one is a fan of this subgenre.

It is in its last third that Riders of Justice does not just become a good revenge thriller but a truly great film.  Jensen’s script and direction unleash both emotional, physical, and comedic fury with the precision of a laser.  Everything that has percolated during the first two-thirds comes to bear fruit and when it does, the film just doesn’t fly, it soars.  By the closing credits, one will be certain that Riders of Justice is the rarest of action thriller film experiences; clever and emotionally satisfying.