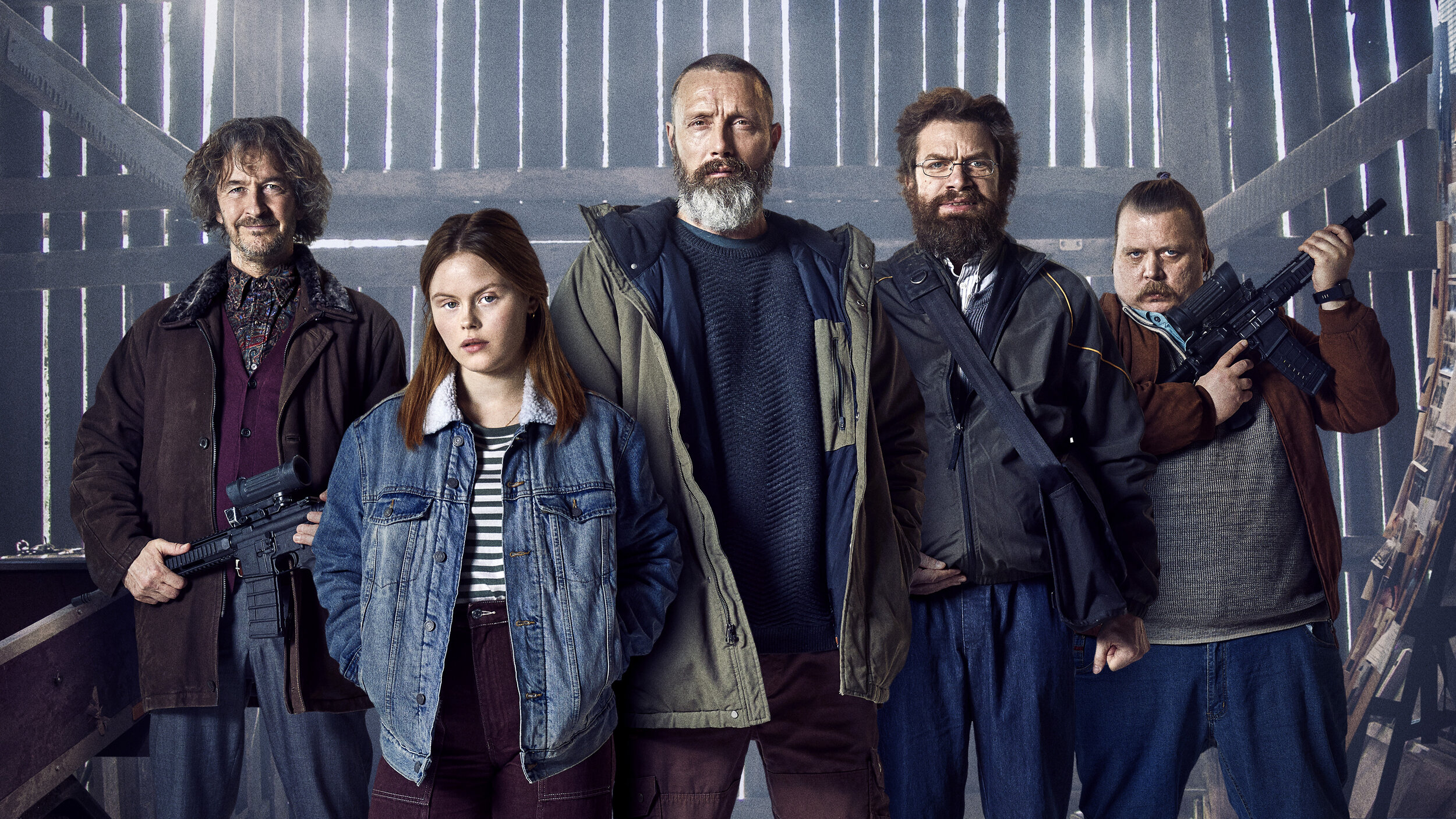 Danish director Anders Thomas Jensen has got the gang back together for another improbable yet entertaining story, this time of grief and revenge, shared by a disparate group of men who are drawn together in the aftermath of a fatal incident.

Markus (Mikkelsen) is a soldier who must return from his tour of duty in the desert to look after his teenage daughter when his wife dies in an accident. Statisticians Otto (Kaas) and Lennart (Brygmann) lose their jobs on the same day as the accident, and Otto becomes convinced that the event was more than a coincidence. Roping in computer genius Emmenthaler (Bro) to provide the evidence, the four men set out to exact revenge on the alleged perpetrators. Tangled up in the middle of this mixed-up masculinity is Mathilde (Andrea Heick Gadeberg), Markus’ teenage daughter, who needs more from her father than he is able to give during the grieving process for them both.

The men set up their technology in the barn and, unaware of the real nature of her father’s connection to the other three, Mathilde finds an unlikely confidante in Lennart – in fact, by the end, everyone finds something they need in themselves by their interactions with the others.

And yet an emotional drama is not what this feels like for most of its runtime. The portrait of grief is punctuated with some very funny scenarios and one-liners which are laugh-out-loud funny without losing sight of the actual catalyst. And then there are the full-on action sequences which are both inevitable and surprising in their escalation.

Although the story is well-plotted and executed, it would be nothing without the four central male performances. Mikkelsen gets a huge beard and is the action-man, Bro is the plus-size computer wizard, and Kaas is almost unrecognisable behind bushy hair and dentures, with the smell of stale clothing being almost palpable through the screen. But Brygmann is the icing on the cake with his verbal blundering and yet unusually sensitive understanding of a teenager’s insecurity and anxiety. He has probably the warmest heart of all.

Riders of Justice treads a remarkably thin line between emotional drama, action thriller and dark comedy, and balances everything perfectly. The humour is absurd without being outlandish, and the whole thing is extremely satisfying to watch.

A small trivia-point for Eurovision fans – look closely in the early boardroom scene and you will spot Jesper Groth, one half of Denmark’s Eurovision act this year. For those with other interests, Mads Mikkelsen gets to wear a marvellous Christmas sweater so either way, Riders of Justice is worth spending a little time with.

Riders of Justice will be released in NY & LA theatres on 14th May, across the US on 21st May, and is slated for international release later in 2021.