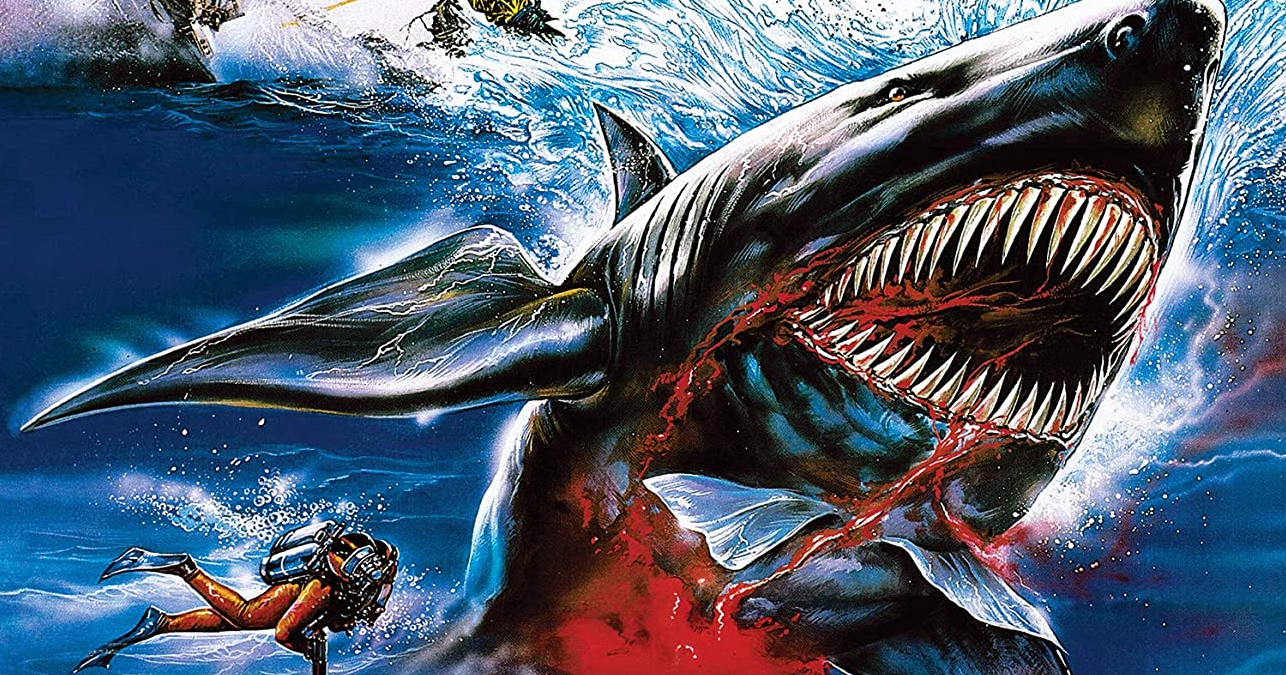 Deep Blood the Joe D’Amato Sharksploitation Cult Classic is now on Blu-Ray for the world to enjoy.  Severin Films continues to do the business of giving us the forgotten Cult Classics giving them superb visual presentations, more so than they had upon initial release.

Miki (Frank Baroni), John (John K Brune), Jason (James Camp), and Allen (Allen Cort) friends since childhood come back together for a summer vacation after college.  Though things get serious when John is killed … by a shark.  Years prior the kids made a blood pact to help each other if in danger.  Well, as that pact failed, they make another one; kill that shark sonofabtich that killed John.  Though that shark sonofabitch could be a reincarnated hoodoo spirit long ago forgotten.  Which makes their task that much harder.

Deep Blood is not a great film but it’s a great movie.  D’Amato’s movie sides on the right side of lunacy giving us this heartwarming coming of age tale of revenge – teens versus a possessed killer shark.  Even writing out that basic plot gives one a smile.  What separates Deep Blood from other films of the era that were released Direct to Video is the sincerity that runs throughout.  There isn’t anything calculated other than ripping off Jaws two decades too late in the film.

Deep Blood plants its flag and means every bit of the story it tells.  From the opening moments of a group of kids burying their pocket knives after talking to Shaman to the closing free frame shot of victory, this movie knows the story it is telling and how it wants to tell it.  D’Amato and screenwriter George Nelson Ott definitely get points for the accurate portrayal of Florida as a whole entity as not much has changed in thirty-two years since its release.

D’Amato’s film may have been a crass cash grab but dammit isn’t a heartfelt cash grab.  When compared to the shark-centric films of the time; Jaws: The Revenge or Jaws 3D, Deep Blood excels at giving us a better story and characters.  At least Deep Blood attempts to explain its shark’s blood lust.  Something that no one can find in Jaws: The Revenge aka Michael Caine’s paycheck.

Severin Films has done it again.  The transfer for Deep Blood is nothing short of amazing.  This crisp, razor-sharp image no doubt looks better than any previous version of the film.  What makes Severin Films so special is that they treat every film, even a D’Amato picture, with the reverence that Criterion treats Bergman joints.  That is to say that watching Deep Blood regardless of your thoughts on the quality of the film the quality of the transfer is undeniable.  This is reference quality work here and nary an imperfection in the transfer.  Bravo to Severin for taking the time and effort to give us the best visual representation of this and all of their films for that matter.

The only extra included is the Theatrical Trailer (3:29)

Severin Film’s Blu-Ray of Deep Blood is out now