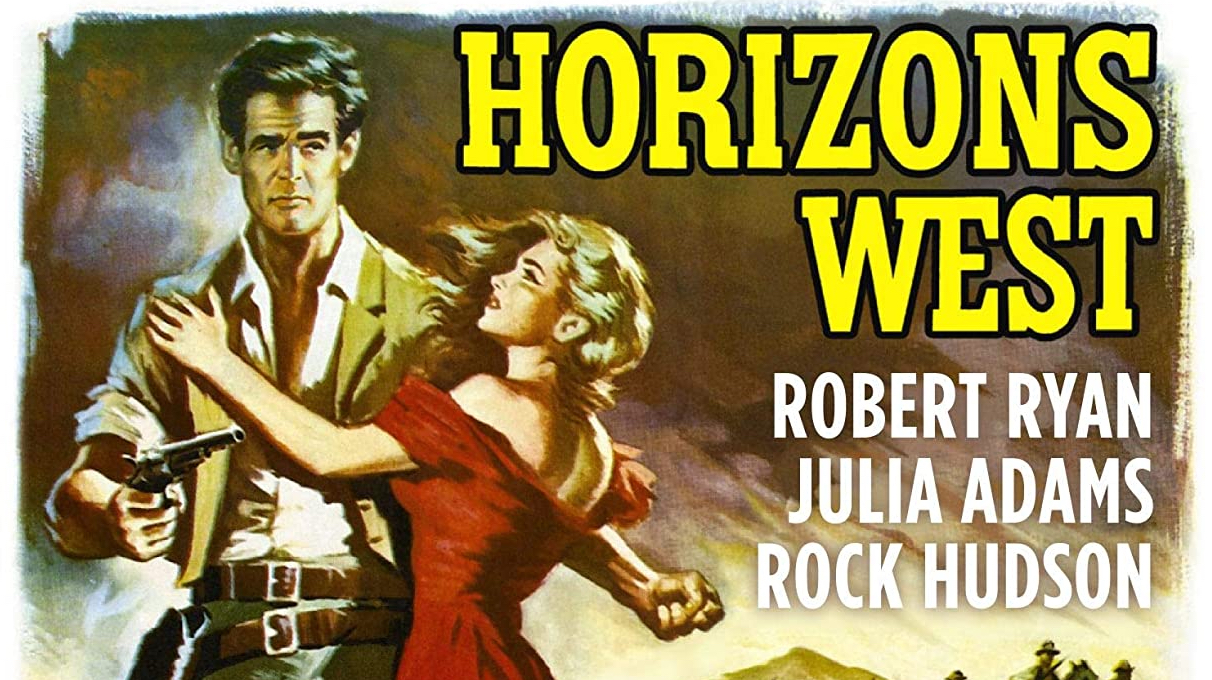 Budd Boetticher packs a lot in the 81-minute western Horizons West.  Kino Lorber has brought this film to Blu-Ray with a beautiful transfer of this Technicolor picture.

The biggest issue with Horizons West for a modern audience will be trying to get over the fact the three primary leads are Confederate Soldiers returning home.  If one can get over this, they will find a lean and mean tale of greed, deception, and power set in Post-Civil War Texas.

Dan (Robert Ryan) and Neil Hammond (Rock Hudson) along with Tiny McGillian (James Arness) return home to Texas.  They find the Hammond ranch in the same state they left it in.  Neil and Tiny are content to work the ranch in peace.  Dan wants more.  Nothing less than everything will suffice for the elder Hammond brother.  Gambling, cheating, extortion, murder all become in the name of “business” rising the ire of Cattle Baron Cord Hardin (Raymond Burr).  The stage is set for Dan to become a murky “hero” that quickly turns into a villainous Land Baron.  So possessed by his greed and thirst for power he cannot see even when Family is trying to show him the errors of his ways. Dan quickly leaves everyone with only one solution…

Boetticher’s westerns always have a political edge and Horizons West is no different.  The cynicism is so deeply embedded in this film it feels like a modern take on corporate greed and the CEO villainy of our current era.  Though screenwriter Louis Stevens is credited here, Boetticher’s fingerprints are all over the script.  The morally ambiguous lead who slowly is corrupted by greed.  The moral quandaries at the center of the film.  The icy way that violence is portrayed.

If one has seen a Boetticher film will quickly be at home with the lean aesthetic that Horizons West is imbued with.  There is a beautiful economy to the way the film is built from head to toe.  Boetticher working with Cinematographer Charles Boyle creates a wonderful Technicolor images that never feel unmotivated.  Editor Ted Kent cuts the film to the bone leaving only the essential story and character work understanding how Boetticher worked as a visualist.

Horizons West is a truly great under-discussed western.  Like all Boetticher’s films, it deserves any cineaste’s view.

Kino Lorber has been provided with a beautiful transfer for this Blu-Ray release.  The Technicolor’s image is handsomely reproduced here with the sort of boldness one expects from the best of transfers of the 3-Strip process.  The image is sharp but retains the grain structure making it looks like the best 35mm archival print you’ve ever seen.

The newly recorded commentary by historian Toby Roan is an informative and entertaining track.  Beginning with a question about the Universal Logo, Roan wastes no time in giving us the production details of this Boetticher western a part of his time at Universal.  Details from the commentary track include the casting of the film including Dennis Weaver’s feature debut, the life and times of James Arness before becoming an actor, a fun fact about Arness and actor Peter Graves, the life and times of Robert Ryan before and after he became an actor, also discussing the extensive filmography of Ryan’s, interesting notes that Ryan was a pacifist and wife was a Quaker, also an interesting note as to who Ryan subletting his apartment in the Dakota in New York, the life and times of Raymond Burr before and after he became an actor, the work of cinematographer Charles Boyle, the work of screenwriter Louis Stevens, the life and times of Rock Hudson and his career as an actor, the life and times of Budd Boetticher and his career in Hollywood leading to becoming a director and his career director, a good time is spent talking about Boetticher and Randolph Scott’s great collaboration, Boetticher being jailed and placed in an “insane asylum”, and much more.  Rather than discuss the film itself Roan discusses the cast and crew that made the film leading up to his discussion about the production and release itself.  It gives a great context to the film itself having thoroughly discussed the players involved.

Horizons West is Boetticher’s working in his genre of choice; the western.  Kino has given us a solid package.  High Recommendations.