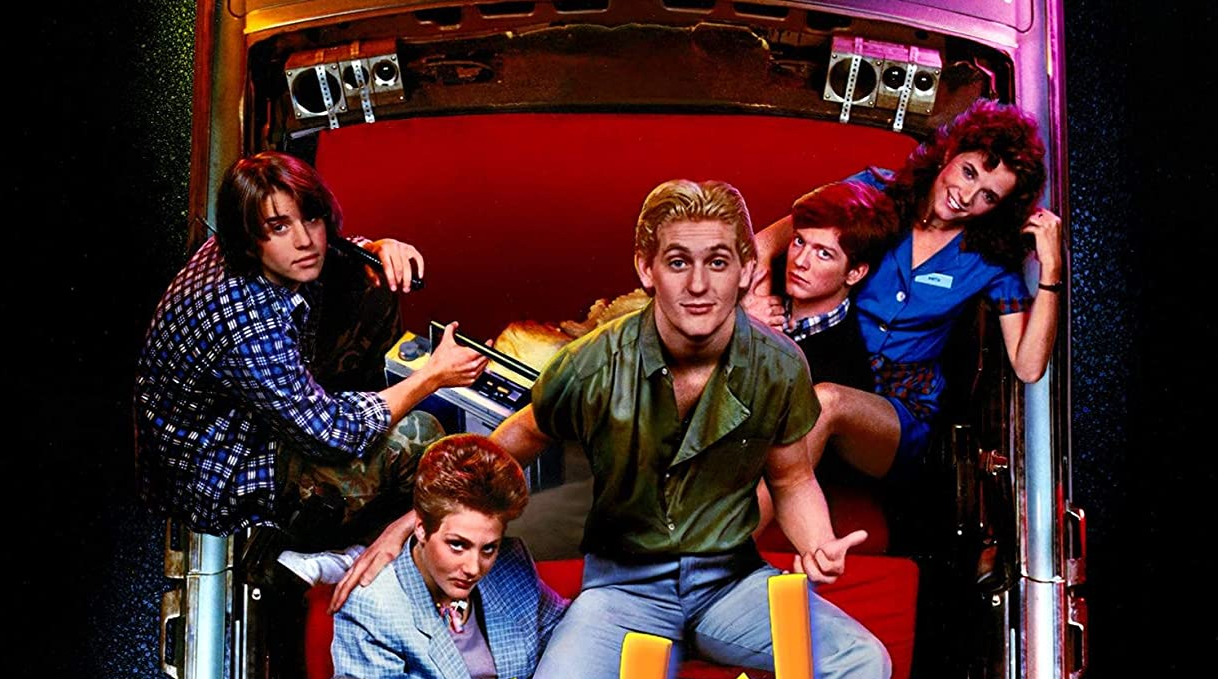 The little-seen Cameron Crowe scripted The Wild Life makes its Blu-Ray Debut thanks to Kino Lorber.

Note: Kino Lorber has dedicated the disc to Mike McBeardo McPadden who appears on the disc on the commentary track and had recently passed.

Sometimes it takes three decades for a film’s time to come around.  The Wild Life is a solid and interesting Teen Comedy that does mind taking things to the dark side of life.

In the waning few weeks of Summer a group of interconnecting Teenagers see their life shift slightly before the new Semister.  Bill (Eric Stoltz) moves out with his still in high school buddy Tom (Chris Penn).  Bill’s brother Jim (Ilan Mitchell-Smith) is a Vietnam obsessed almost incel.  Anita (Lea Thompson) Bill’s Ex is involved with a dirt bag cop (Die Hard’s own Ellis… Hart Bochner).  Anita’s best friend Eileen (Jenny Wright) just wants Tom her on-again-off-again boyfriend to just stop being Tom (everyone does for that matter).  They all swirl and collide as teenagers do.

There isn’t a strict plot but rather episodic mini-plots that play out over the runtime like some sort of Altman-esque film.  Altman is actually aparapo as the film is always about character and never about plot.  The plots do sort of resolve themselves but never in a way that some teen movies love to make everything wrap up in a tidy bow.

That is part of The Wild Life’s strength and weakness.  The film’s low level steaks make it more of what Tarantino is fond of calling “a hang out film”.  Characters come in and out of scenes talking about other characters and sometimes causing havoc, in the case of Jim and Tom, but never being anything of consequence.

Part of the charm of the film is the way that the script by Cameron Crowe has teen acting like teens even if they’re acting like unremittent assholes.  The Wild Life is a film that could have only been a product of the 1980’s as everything from smoking, drinking, setting off pipe bombs, playing with num-chuks, underage sex, and strip clubs is either discussed or displayed.  That wherein lies its biggest strength.  It’s ability to allow teens to be teens without consequence.

The biggest draw for many will be the roster of “before they were famous” actors and famous cameos in the film. Actors and musicians like Rick Moranis, Randy Quaid, Michael Bowen, Sherilyn Fenn, Leo Penn, Dick Rude, Nancy Wilson, Ben Stein, Lee Ving, and Ronnie Wood (yes, that Ronnie Wood).

Many will find The Wild Life slight when matched against the John Hughes filmography or even Crowe’s early scripted film Fast Times and Ridgemont High.  Though attuned to the charms of Richard Linklater’s work a decade later will find a spiritual cousin in this film.

The transfer provided by Universal to Kino Lorber is a solid and handsome image.

The newly recorded commentary by writers Mike McBeardo McPadden and Ian Christie is an informative deep dive into a little-discussed film.  Details include the use of 60’s Music, the casting of Dean Devlin, the music of Van Halen, Eddie Van Halen’s work as a composer, the way the film was advertised as a sort of sequel to Fast Times, what was happening culturally in 1984 (which they dub as the most ’80s year of the ’80s), the origins of the film as, of all things, a Jim Morrison biopic, how that was developed to something completely wild (you’ll have to listen to the commentary track to hear), the oddness of specific storylines, looking at the film from a current lens, the missing needle drops, Van Halen’s other composing projects including an Adult Film, the cameo by Kevin Peter Hall (who was the man in the suit in both Predator and Harry and the Hendersons), the work of Rick Moranis, the Randy Quaid cameo, the Leo Penn Cameo, and much more.

The Wild Life is an unexpected charming lo-key comedy.  Recommended.