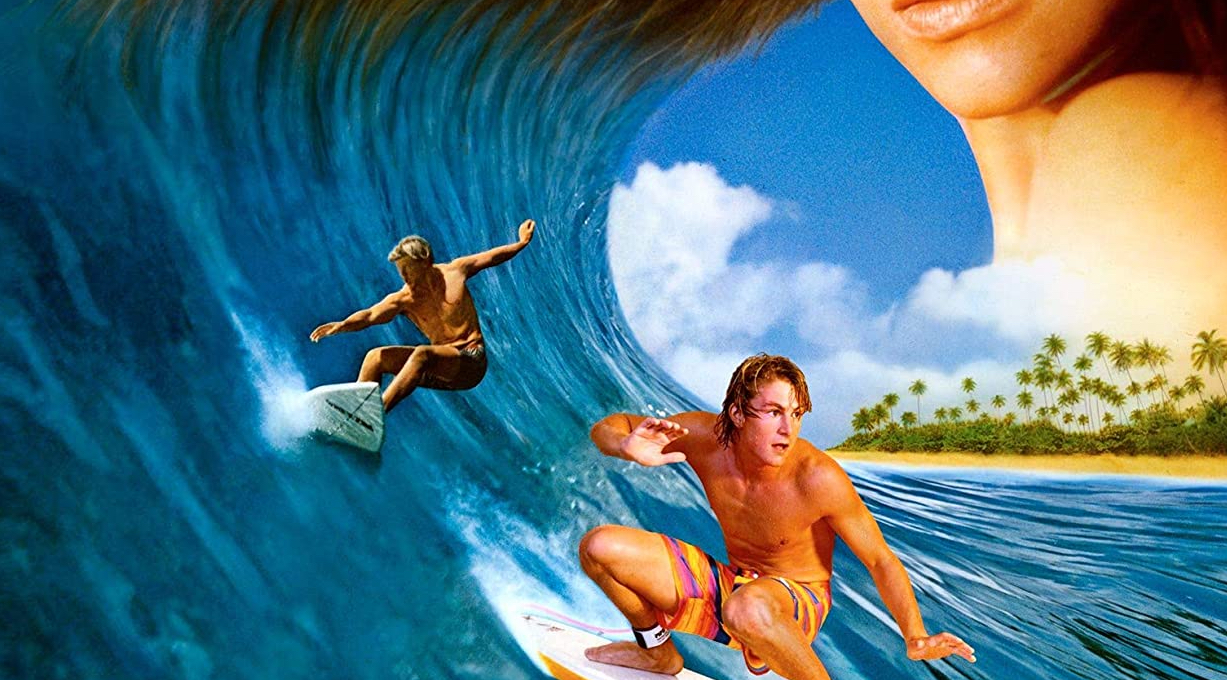 Burkhart … Burkhart … Burkhart … Lance Burkhart (Laird Hamilton) isn’t even the star or main character of this piece of 80’s white dude wish fulfillment.  But you wouldn’t know it by the number of times his name comes up.  So much so the dude-bro set could come up with a drinking game around his name.  North Shore is that kinda movie.  Where a white dude, from Arizona no less, goes to Hawaii and disrupts just about everything and shows all the natives Hawaiians, and others he’s the best of the best.

Lifelong Arizona resident Rick Kane (Matt Adler) has just won a championship in a wave pool in his home state.  Rather than prep for his full scholarship at an NYC Art School of design (no doubt FIDM) this guy decides he’s going to go to Hawaii to see about riding those real-real waves.  No sooner than anyone can say “splish-splash I was taking a bath (and surfing)” Rick’s master plan of stating with a dude he just met once go out the window… shocking. The kid embarrasses himself on the big waves in front of everyone and gets his stuff stolen by locals.  You’d think sad-dude-bro would leave Hawaii and head to his cushy NYC Design School.

Faster than you can say “white privilege” Rick finds friendship in Turtle (John Philbin), a job and mentor in Chandler (Greggory Harrison), and love with Kiani (Nia Peeples).  Rightfully, Island Locals including Vince (real-life surfer and genuine badass Gerry Lopez) are suspect of this poser.  Shit, even the pro-surfers like the aforementioned Burkhart are pissed.  But don’t worry, the strength of Rick’s almost supernatural taking to real surfing will heal all.

Regardless of my smartass plot breakdown North Shore is a highly entertaining piece of late 1980’s pop filmmaking.  If you know even a wee bit about Surfing then people like the aforementioned Hamilton and Lopez will be easy to spot and a lot of fun to see act.  The surfing in the film is definitely the attraction here as it’s beautifully shot by Peter Smokler.

The hardest part of watching the film for a current audience is getting over is just how much white privilege is on display.  It does address this issue in its own very 1980s way but it’s hard not to see through all this.  Its way of showing that everything is okay is making sure that Rick gets the approval, via a nod, from Vince. It’s as though Vince is saying, “you know you beat up my baby bro, slept with my cuz who you have no intention of staying with, you hijacked the surf competition I was refereeing for which I should have been in competition in… but it’s cool cause you a Soul Surfer bruh!” Though points should be made that this is definitely something that comes up during the training montage/scene by Chandler.

North Shore is highly entertaining but at the same time below the surface can be a little troubling.  One will surely find themselves having a great time but with a nagging feeling like Rick really shouldn’t be a part of this whole ordeal.  But then again… maybe that’s the point.  The unlikeliest of surf heroes.

Regardless of your thoughts on the film.  North Shore looks beautiful on Blu-Ray. It appears that it’s the older transfer from the DVD release but Kino Lorber’s disc is a sharp and handsome image.  The film was shot on Super16 and Kino has been able to produce the warm and beautifully intimate image that they shot.

The archival commentary from 2002 by co-writer/director William Phelps and co-writer/producer Randal Kleiser is a relaxed affair.  Kleiser begins with the fact that he has a home on the North Shore and how he went to Phelps who had shot a few Surf films.  Details include how they developed the story of the Main Landers (aka howleys) and the Islanders, how the film was shot on Super16, how the film started as indie production and evolved into a bigger production because of Universal’s involvement, the fire was a real fire during the sugar cane field, the assistance of John Milius (whom both went to USC with) beyond just making sure that they got the surfing right but also helping with the Island politics, the pigeon language, the casting of John Philbin, the real-life surfing crews that were the basis of the Island surfing crew, the casting of Laird Hamilton, the replacing of the original actress that played Kiani with Nia Peeples, the difficulty of shooting the surfing from a technical perspective, the music/needle drops in the film and how they came about, the surf photographers, working with Gerry Lopez, how Andy Warhol helped Kleiser start his career, how Tom Pollock greenlit the film, and much more.  Phelps and Kleiser deliver a solid informative commentary track.

North Shore Unscripted: Talking at Home with the Director and Cast (28:06) – a surprisingly in-depth making-of featurette.  Using various interviews with cast and crew they build a making of and recollections of the production.  Details include Matt Alder’s take on the film, Greggory Harrison taking on a role that was similar to him (he’s admitted that he’s a soul surfer), Nia Peeples discussing her casting, and also the surfer’s ethos for catching waves at any time,  John Philbin having to audition 7 times before getting cast, Gerry Lopez discussing his involvement and watching Laird Hamilton grow up (and the film mirroring his story), Laird Hamilton and his casting in the film, and much more.  Featuring interviews with Matt Adler, Gregory Harrison, Phelps, Gerry Lopez, Laird Hamilton, Phelps, and Kleiser.

Deleted Scenes (3:10) – the 3 scenes are more extended than deleted. They consist of Rick Leaving home to Hawaii, Rick talking to Chandler’s wife, and Turtle and Rick at the Fashion Shoot.  The scenes appear to have been pulled off a VHS dub.

Alternate Ending (1:52) – The alternate ending is actually an ending shot with the original actress that was cast a Kiani before Nia Peeples was cast.

Those that loved it as a kid, like this review, will find North Shore a fun nostalgic blast.  Recommended!!!