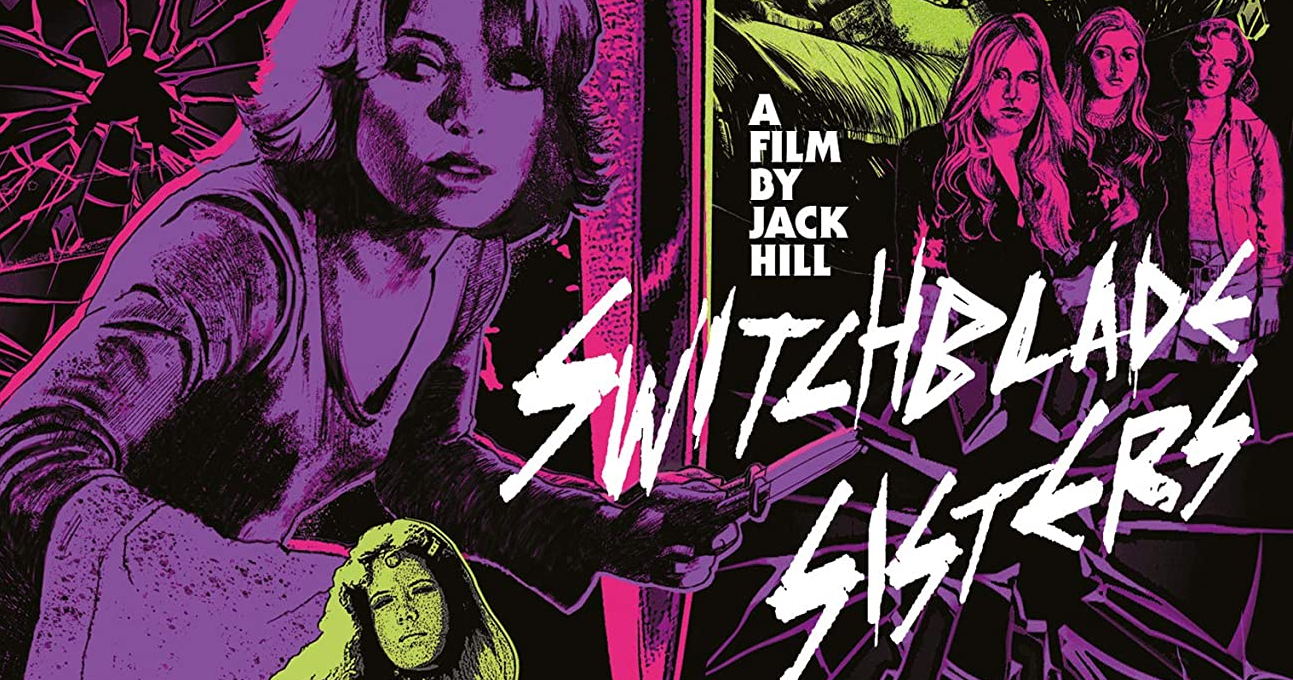 Switchblade Sisters is a supremely badass piece of exploitation cinema.  Jack Hill’s film runs on all cylinders for its 95-minute run time.

Everything changes for the Dagger Debs when Maggie (Joanne Nails) shows up.  Maggie a recent high school transfer into the Debs territory.  After a tussle that ends with Maggie and Lace (Robbie Lee) and the rest of the Debs in the juvenile hall.  Coming in as enemies but released as friends and allies.  Though jealousy and backstabbing causes the destruction of the Debs inside out.  From the ashes rises the Jezebels breaking out on their own and getting vengeance on not only their rivals but the men who have abused them.

Hill’s film at first glance is just straight-up exploitation fare.  Upon further examination, one will find Switchblade Sisters a rather savvy and modernly relevant social action film.  The film makes no qualms about being on the side of these young women and the horrors they face.  Yes, the film is seedy in the way that most grindhouse fare is but Hill and the screenwriters are smart enough to never make things salacious.  Like the rape that happens on screen.  It isn’t there for titillation but rather it shows the kind of situation these young women are in.

Every act that shows the Jezebels in action or in a situation is one that shows how they not as a gang, but young females are abused systematically.  If they’re not abused at home, they’re abused by their “boyfriends”, or the system that just sees trouble.  It’s telling as the Jezebels begin to look for assistance in their final battle they turn to another all-female gang for help.  All of this purposeful and done with the kind of style that one comes to expect from Hill.

What separates Switchblade Sisters from many of its counterparts is its progressively modern, albeit very existential, political, and feminist outlooks.  Politics and feminist outlooks that even modern films cannot compare.  Part of the joy of Jack Hill’s film is finding that it is much more layered and textured of an action film than one could expect.

Arrow has a solid transfer for the film.  This isn’t a full restoration but the hi-def master the film is coming from is gorgeous compare to other editions (including the prior DVD).

Note: unfortunately it appears that Arrow Video was unable to get access to the original Audio Commentary by Jack Hill and Quentin Tarantino.

The newly recorded commentary track by critics Samm Deighan and Kat Ellinger is a great informative track from the duo.  Details include Deighan and Ellinger’s personal relationships with the film, the cultural context of the juvenile delinquent film, how Switchblade Sisters fits into this context, the difference between 70s and current action/exploitation cinema,

the female teen delinquent subgenre (including the truly great never discussed Teenage Doll), Russ Meyers and Roger Corman’s influence on the subgenre, Women in Prison film genre and Jack Hill’s work in it (which this film has a section that is set in prison), sexual politics, the rape in the film and its cultural relevance, the work and career of Monica Gayle, the Lesbian touchstones, the friendships between the women, the teen pregnancy in the film and in film in general, high school films and how this differs than most, the roller skating rink set piece, the Japanese Girl Gang films (e.g. Stray Cat Rock), the work of Don Stark (who played Bob in That 70’s Show – which they discuss), the stylized dialog of the film and in cinema in general, a look at rape/revenge subgenre, how critics taken this film, Jack Hill’s Spider, Baby, the shifting of tones in the film, and much more.  Deighan and Ellinger are a delight to listen to on this entertaining and very informative fact-based track.  Get your pens ready as they manage to mention a bunch of other films that if you love Switchblade Sisters you’ll want to know (quite a few that I haven’t seen or heard of).

We Are The Jezebels (39:19) – is an archival documentary featuring director Jack Hill, producer John Prizer, casting director Geno Havans, production designer B.B. Neel, stunt coordinator Bob Minor, and stars Joanne Nail, Asher Brauner, and Chase Newhart.  The making-of is a glossy and informative featurette.  Details include how Hill got involved with API (the studio that produced and released the film), how this led to Hill’s naughty The Swing Cheerleaders, the low budget/exploitation world at the time, how this led to Hill and Producers wanting to do a Gang Film, the casting of the Robbie Lee, Monica Gayle, Joanne Nail, Asher Brauner, and Chase Newhart, the 18-day production, the casting and friendship Kitty Bruce, the politics of Hill and how they informed the film, Hill’s writing and directing on the picture from the cast, how Othello influenced the film, how he used sets and stages, how the film was the last to use the MGM New York street set, the building of the car/tank in the finale, the roller rink scene and how it was produced, screening the film for Corman the first time, how they attempted to get a PG rating and instantly got an R-Rating, the release and reception of the film, its re-release by Rolling Thunder (a Quentin Tarantino Production Company), and more.

Gangland: The locations of Switchblade Sisters (6:54) –  is an archival documentary in which director Jack Hill and filmmaker Elijah Drenner revisit the shooting locations of Switchblade Sisters.  Hill’s recall on all of the locations is fantastic looking at the high school which had been rebuilt, the location they filmed where the ladies cross the street to their hideout, The Jobo’s which is now The Oinkster, and the roller rink.  Shockingly the sets remain.  Hill is hilarious giving Drenner shit about a few things.

Jack Hill and Joanne Nail at the Grindhouse Film Festival (9:24) – is another archival featurette with director Hill and actor Nail recorded back in 2007.  Shot at the New Beverly the featurette gives people a look at the storied theater if they’ve never been including giveaways even show us a view from the projection booth.  It is a short introduction and short post-screening Q&A.

Interviews with Jack Hill, Robbie Lee, Joanne Nail (7:48) – is an archival featurette of interviews with the director and stars.  Filmed sometime in the 90s on video.

Which is the treasure trove of Jack Hill film trailers:

Behind the Scenes (1:00) – 6 behind the scenes stills of Jack Hill directing various scenes that run automatically and be navigated through the Next Chapter button on your remote.

Promo Stills (4:00) – 24 promotional stills that run automatically and be navigated through the Next Chapter button on your remote.

Lobby Cards (4:40) – 28 lobby cards, including nine that retitled the film Warriors II, which appear to either be from Mexico or Italy, the German’s that hilariously redub it with Bronx in the title.  These run automatically and be navigated through the Next Chapter button on your remote.

Posters (1:10) – 7 Movie Posters from various countries like US, Mexico, Germany, Italy. These run automatically and be navigated through the Next Chapter button on your remote.

Home Video (1:20) – 8 Home Video covers from various countries like US, Mexico, Germany, Italy. These run automatically and be navigated through the Next Chapter button on your remote.

Switchblade Sister is a Classic that deserves the explementary treatment that Arrow Video has given it.  Highest possible recommendations!!!!