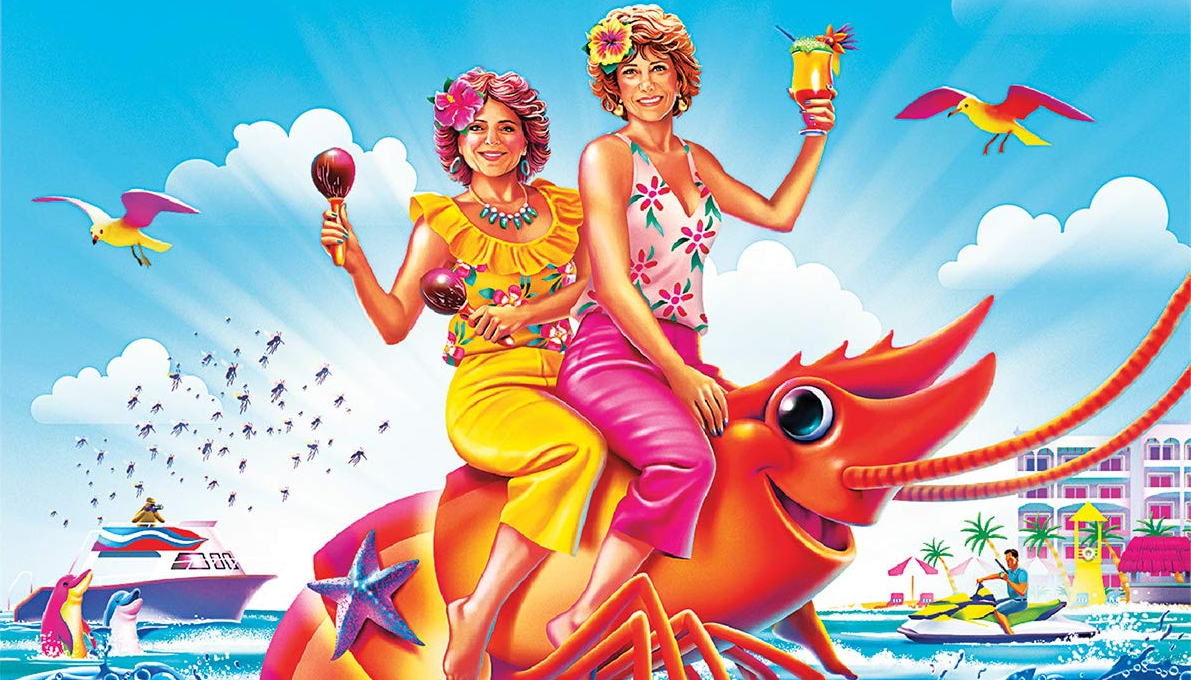 Barb and Star go to Vista Del Mar is an instant cult classic.

The strangest of alchemy is at work in Barb and Star go to Vista Del Mar.  A rare comedic confection: comedy so specific in its humor and style not made for a broad audience.

All anyone needs to know about this esoteric comedy’s plot is in its title.  Barb (Annie Mumolo) and Star (Kristen Wiig) decide after being fired from their jobs decide for a change of pace and to find their “shimmer”.  Before anyone can say “How did Stella get her groove back, again?” our duo is off to Vista Del Mar (Florida).  Screenwriter and stars Mumolo and Wiig have created something so unique and odd the only choice is to accept everything that transpires.

The best most apt comparison for anyone wanting an understanding of the comedic treat they are in store for is Austin Powers: International Man of Mystery.  In that film, Mike Meyers and Jay Roach filtered their unabashed love of 1960’s Swinging Spy Thrillers (not Bond but Flint and Helm) in that series.  Director Josh Greenbaum, Mumolo, and Wiig channel their love of women friendship films, musicals, rom coms, and 90’s action thrillers into the strangest and most satisfying of concoctions.  The success of the film comes from its love of its characters.  There is never a moment during the runtime where the film is condescending to Barb and Star or any of the characters.

Part of the pure joy of the film is just how game the entire cast is to make themselves look absolutely silly.  Wiig and Mumolo as a comedic duo have chemistry to spare.  Being writing partners since their time at the Groundlings informs on their “friendship” in the film.  Rarely do films about friends, especially the serious ones, show friendship in all its glory.

Here it feels like the screenwriter actor hyphenates have cracked it.  Their performances are both wildly broad and acutely specific.  Which feels like the mystery and magic of Barb and Star.  They are a strange entity that many of us have come in contact with.  We have all known an Auntie, Co-Worker, or even friend that are these women.  Give a little too much personal or try to get too personal but always with the best intentions.

It isn’t just Wiig and Mumolo that are given themselves comedy gold.  Jamie Dornan may never go back to serious films again after this pitch-perfect comedy performance.  As Edgar Paget, Dornan lets his freak flag fly.  The assassin/right hand to the main villain, Paget is dispatched to fulfill a plan of revenge and gets caught in the wave of shimmer that is Barb and Star.  Dornan never winks or nods during the performance creating genuine chemistry with both Mumolo and Wiig as co-stars.  It is the musical number Edgar’s Prayer that will become the thing of legend and give Dornan a decade of comedy roles… if he’ll have it.

The rest of the cast that includes Michael Hitchcock, Damon Wayans Jr, Kwame Patterson, Vanessa Bayer, and Phillis Smith are aces in their smaller supporting roles.  With comedic powerhouses in the cast, it’s actually newcomer Ryen Doi that steals the show.  Doi is a comedic assassin stealing scenes from everyone including Wiig (a huge task considering).

Barb and Star go to Vista Del Mar is best to be discovered with little to no information beforehand.  Just know what awaits you like Barb and Star is completely unexpected and utterly delightful… with a huge dollop of weird.

Lionsgate is in contention for best looking Blu-Ray of 2021.  Barb and Star go to Vista Del Mar is filmed Digitally with a highly colorful palette that will work out any TV Monitor.  The image is sharp, colorful, and damn near reference quality.  There hasn’t been a release, or one announced for 4K UHD, but this Blu-Ray Transfer is so good I would be hard pressed to say they could improve on the image with an HDR10 or Dolby Vision passthrough.

The commentary by director Josh Greenbaum, actor/writer Kristen Wiig and actor/writer Annie Mumolo is both inside and hilarious.  The trio provide a relaxed informative commentary.  Details include the opening, casting Jamie Doran, the issues with wig, filming in New Mexico, how they created Barb and Star, the Trish set piece, the hotel musical number, the shooting of the drug scene, working with Jamie Doran on the musical number, the effect of the pandemic, the cameo by a certain very famous actor, the work of Richard Cheese, the make-up heavy work that Wiig had to go through, and much more.

Barb & Star: Casting in Paradise (10:53) – is a featurette focusing on the writing of the roles, casting the various cast members, and working with them.  Comments by Greenbaum, Mumolo, Wiig, Jamie Doran, executive producer Margot Hand, and Reyn Doi.

Bloopers (6:16) – the actors in various moments they break or make each other break.  There are definitely moments from deleted scenes.

Deleted Scenes (12:41) – 9 Deleted and extended scenes.  They range from short pulls to full scenes.  Note that the scenes are not in order. Scenes can be navigated by using the Next Chapter on your remote.

Barb & Star Go to Vista Del Mar Fashion Show (1:29) – a small witty promo piece that anyone that has seen the film will LOVE. Featuring some of the cast of the film.