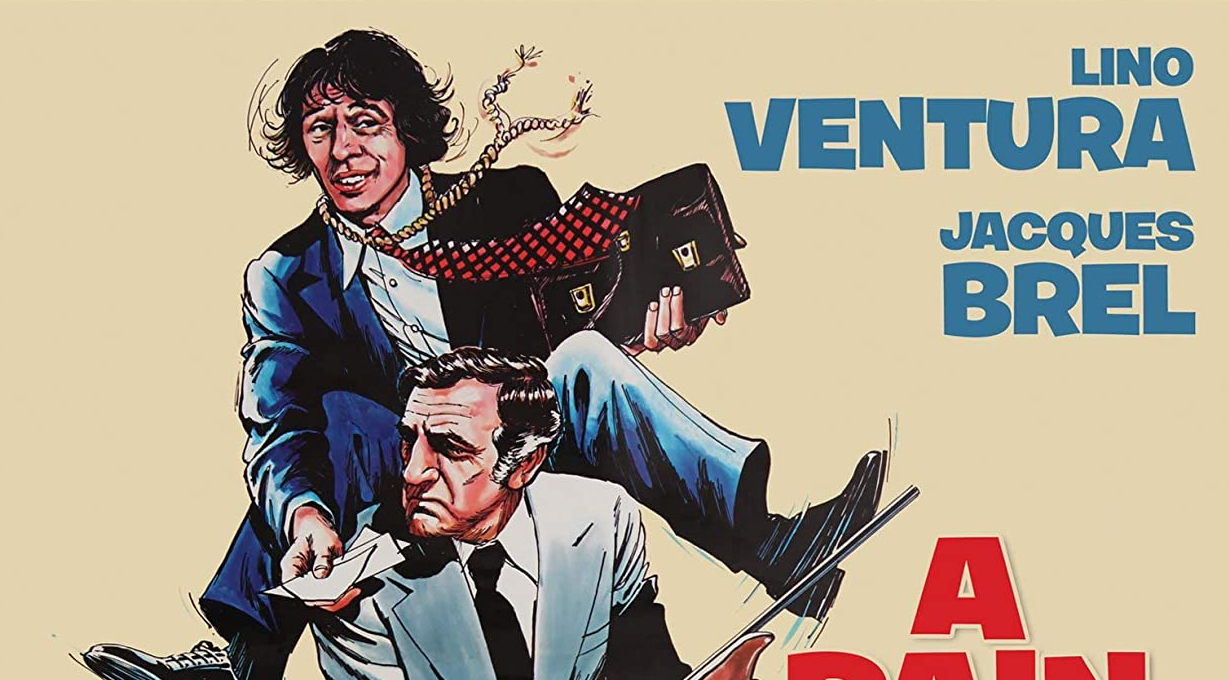 The French Farce A Pain in the Ass makes its Blu-Ray debut with a wonderful new transfer thanks to Kino Lorber.

From Édouard Molinaro the director of La Cage aux Folles and its sequel comes another French Comedic Farce A Pain in the Ass.  Rather than taking on the family drama (like La Cage) this time he’s taking on the Crime Thriller that made Jean Pierre Melville so famous.

Ralf Milan (Lino Ventura) is a hitman that comes to Paris with a contract from The Organization to take care of a witness that could take the big boss down.  All business and very tightly wound, Milan has no idea what he’s in store for when he meets François Pignon (Jacques Brel).  Pignon salesman for the third-best French Suit Shirt Company is suicidal having been left by his wife (Caroline Cellier) for another man.  Pignon intends to kill himself in his hotel room.  Milan cannot be bothered with this sort of diversion but is forced to anyways.  Introducing the lovelorn Pignon into his life is just the beginning of the complications for the Hitman.

Part of the fun of this kind of very specific type of Farce is how based in character and the complex complications that arise.  Pignon as a character is the perfectly rendered sitck-in-the-mud cuckolded and how it grates at Milan’s every turn.  Ventura and Brel are the perfect match with the best of chemistry that creates the kind of tension and frustration that makes for comedic gold.  It helps that both men understand to never play the joke but play the drama of the situation.

The surprise of A Pain in the Ass is just how it unfolds or in the case of Milan’s character, everything unravels.  Those that love a good comedy about bad days and complications that get in the way of eventual goals are going to adore the film.  Like Molinaro’s La Cage aux Folles and screenwriter Francis Veber’s The Tall Blond Man with One Black Shoe this film is the kind of comedy that builds to a truly wonderful funny conclusion.

The brand new 2K Master is a sharp and handsome transfer.

The new commentary by critic Nick Pinkerton is a solid informative track not only giving us information about the production but about French Cinema at the time and a history of the cast and crew of the film.  Details include a discussion about French Farce, the career and style director Édouard Molinaro, the career of screenwriter Francis Veber and his success in French Farce and American/English Language updates to his films, the state of French cinema in the 1970s when this was made, the career (including his wrestling career) and life of star Lino Ventura, the career (both acting and musical) and life of Jacques Brel, how the film is as much a satire of the French Thriller as it is an outright comedy, the concept for this film was in part inspired morbidly by the Martin Luther King Jr assassination, Brel’s untimely passing to Cancer, the American remakes of French Farces, the remake of this film Billy Wilder’s Buddy Buddy, the work beyond this film of the producers Georges Dancigers and Alexandre Mnouchkine, the career of Caroline Cellier, the box office results of the film, the reviews stateside, the release of the film and how and wide and varying it was, and much more.  Pinkerton gives us a commentary filled with historical information about the release, production, and development of the film.

A Pain in the Ass is an entertaining French Comedy.  Recommended!!!!