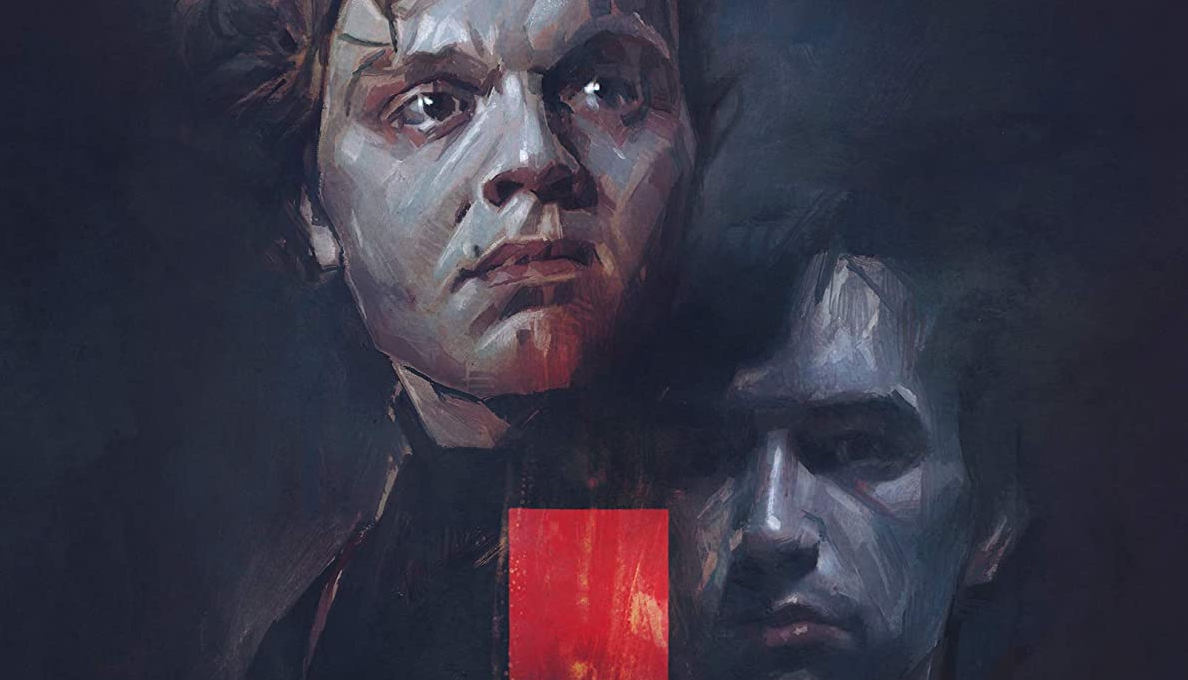 After close to two decades estranged friends Francis (Liam Aiken) and Jean-Paul (Joe Adler) begin where they left off.  Francis needs a place to stay.  Jean-Paul needs a friend.  Slowly though there appears to be more going on in this meticulously designed mid-century Hollywood Hills home.  Francis and Jean Paul’s friendship becomes more and more codependent and moves beyond the normal boundaries.  Theft, obsession, sexuality, money, anxiety, friendship all come into play along with the bloodhound, a mysterious masked figure crawling throughout the house.

The Bloodhound is effective in its ability to get under one’s skin because of its oblique nature.  Nothing is what it seems in Picard’s film.  Nor is it explained or rationalized. Scenes play out in a slow ever-tightening noose.  The way that the film is designed visually with static camera shots and reliance on composition.  This style helps in the way it traps the viewer even in the most uncomfortable scenes to watch these two characters interact.  Be it a sleeping bag fight or the friends watching a pornographic film together the camera never averts its gaze from its two subjects.

The way the camera never breaks these visual rules it creates at the beginning is all the more frightening when more hallucinatory aspects of the story begin to happen.  As Francis thinks that “coming clean” will help this hellish bargain he made with Jean-Paul will clear the air.  The camera never relenting like Jean-Paul and what could be a Henke-esque game he is playing with Francis.  A game that like in a Michel Henke film has rules that our central character understands or knows.

To wit, the most frightening aspect of The Bloodhound truly not knowing what could happen next but understanding completely what will happen.  Dread is one of the hardest and purest forms of terror in cinema.  Patrick Picard’s film much like the films of Henke or even David Lynch manages to distill this in its purest most artful cinematic form.  That slowly sinking feeling of the inevitable unknown.

Arrow Video has done a marvelous job of transferring the Digitally Shot film to Blu-Ray.  The sharpness and color reproduction on the transfer are gorgeous.  The film is shot with a painterly eye towards composition and every frame is rendered here with that in mind.  Bravo to Arrow as they have produced another winning transfer.

The audio commentary by director Patrick Picard and editor David Scorca is a walk through the production and themes of the film.  Details include how they found the house in the film, the problems of shooting the film, the construction of the story, working with the actors, editing the picture, the sleeping bag fight, the construction of the bloodhound as an entity in the film, how cubism informed the film’s visual and editorial style, the crunch of the 15-day schedule, the production design and art direction on a lower budget film, and more.  Picard and Scorca give a solid commentary to a film that asks for you to come up with your own answers, without providing any real concrete answers themselves.

On the Trail of The Bloodhound: Behind the Scenes of a Modern Chiller (45:21) – is a behind-the-scenes making of the film.  This is a handsomely produced making-of that goes beyond the normal EPK featurettes.  The featurette goes deeper into the making-of with the entire cast and crew commented and shown in B-Roll footage (which appears that they shot throughout the filming of).  They discuss casting, production, production design (which is very important to this film), the challenge of shooting the film which is set mostly at night during the middle of the day, how AFI (which Picard and many of the crew attending) helped out the production, the use of Julis Schulman as a visual guide and reference, the post-production process, the eventual release and how COVID affected the release but how Arrow picked up the film, and much more.  Comments by Patrick Picard, David Scorca, Jake Magee, Joe Adler, Arielle Ness-Coh, and more.

Arrow Video has given writer/director Patrick Picard’s and his feature-length debut The Bloodhound their best foot forward.  Recommended!!!