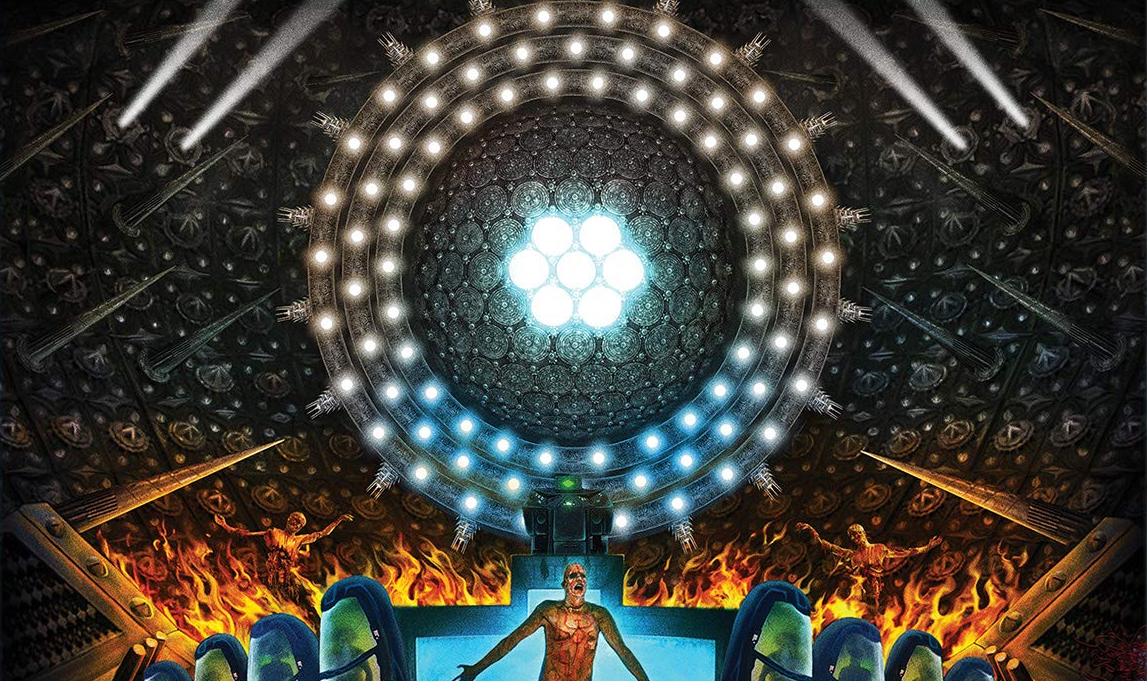 Scream Factory brings Paul WS Anderson’s best film back to Blu-Ray with a new 4K Transfer and a ton of extras.

I feel like I am one of the few without exception that unreservedly loves the whole of Paul WS Anderson’s filmography.  Not just Event Horizon but all of it.  From Resident Evils to Mortal Kombat to Death Race.  All of it I find massively entertaining and fascinating.  Event Horizon above all may be the crown jewel.  The right mixture of a haunted house and sci-fi tomfoolery that’s taken the right amount of seriously and the right amount of cheekiness to make it Friday Night fun.

The Lewis & Clark has been deployed as a rescue mission to find the Event Horizon which hasn’t been heard from in seven years.  Captain Miller (Laurence Fishburne) leads his crew and the architect of the Horizon Dr. Weir (Sam Neill). The crew is on edge the instant they dock to find the crew ripped to shreds and the signs of a last-ditch effort to destroy the ship.  Slowly Miller, Weir, and the rest of the crew find that the doctor’s invention of using a Black Hole to travel faster than light came with a consequence.  That consequence opening a doorway to a hellish alternate universe.

Anderson’s film from top to bottom knows exactly what the film is.  Gore, scares, production design, visuals, score, and acting are all designed as pop filmmaking at its finest.  There’s a confidence here in Anderson’s work that felt he did not gain again until well into the Resident Evil series.  Even cut to a brisk 95-minutes the film works.

The haunted house of Satan set in a spaceship is as great a conceit as there is in horrordom.  Ridley Scott’s Alien is essentially of a similar ilk though there it is a monster rather than a supernatural entity.  Though the film plays out in the same fashion as Scott’s film. It’s in its execution is what separates Horizon from Scott’s film.  The combination of serious dread and cheeky gallows humor that feels more like Hellraiser than it does Alien.

It helps that Event Horizon is cast with a list of truly great actors that understand the tone of the piece they’re working in.  Laurence Fishburne is perfect as the steely take-no-shit Captain Miller.  The star does what all stars do and brings the gravitas to a role that could have been by the numbers but isn’t.  The film is better for every truthful moment that Fishburne brings.  The monologue about the fire in space is by itself a great moment that Fishburne plays with the same kind of intense commitment that he brings to anything he does.  What always separates Fishburne from most of his peers is that level of commitment no matter the material.

The same could be said for Sam Neill.  Neill has always been a performer that rarely gets the credit he deserves for the dexterity he brings to films.  As Weir, he is asked to do a great many things and play the ludicrous playfulness of the role but also the tragedy of the character’s history.  The way that Neill manages to chart these moments and make them feel cohesive to the character is one of the unnoticed strokes of brilliance in the film.

The rest of the cast headed by Richard T Jones, Kathleen Quinlan, Joely Richardson, Jason Isaac, Sean Pertwee, and Jack Noseworthy all do solid work and are greater than the sum of their parts.  They do enough to leave a mark during the run time of the film.  Often times the casts in these ventures are fodder for the horror but here screenwriter Phillip Eisner and Anderson do a solid job to give them a chance to flesh out their characters.

The NEW 4K Scan Of The Original Camera Negative is a very different experience than the DVD and other Blu-Rays of the film.  This version of Event Horizon is beautifully rendered on Blu-Ray.  Many will see a major difference.  Specifically, the way the film looks.  It appears that the film was color graded slightly different than the previous DVD and Blu-ray Editions.  The image is sharper, contrast, and black levels much deeper.  The color reproduction still seems to be the same general coloring but it appears that the blacks are deeper making it a more robust image.  This will definitely be a subjective critique.  My take is that since the scan is from the original camera negative.  This is closer to the image they produced rather than the various processes that the film went through to get to the Release print seen in 1997.  Anything that gets us closer to the actual camera image is a good thing.

The archival commentary by Paul W.S. Anderson and Jeremy Bolt is a solid track that was recorded back in 2006.  Details include the design of the Event Horizon based off of Notre Dame cathedral, Terry Rawlings working on the film, how they were inspired by Robert Wise’s The Haunting, the test screening process, the rushed nature of the production (10 months from preproduction to release), their gentle ribbing of Phillip Eisner (the screenwriter) never having seen The Black Hole or Solaris(both which the film feels influenced by), the building of the Third Containment (the gyroscopic engine of Event Horizon) and how it was all physical, the space suits and how physically challenging they were, how a barbie was a part of a joke by the FX group, the practical model work vs CGI in the film, working at Pinewood (specifically the Bond Stage) and challenges, turning down X-Men for this project, the influence of how the film was photographed, how the images from hell were produced, how Fishburne and Neill worked very differently, the different versions and studio and audience reactions, the post-production troubles, and more.  It takes a while for Anderson and Bolt to get cooking but one they start to discuss the production it’s a great track.

Reflecting On Hell (10:06) – is an all-new Interview With Director Paul W.S. Anderson.  The director discusses how he chose Event Horizon while waiting for Kurt Russell for Solider, the influence of the work of Bosch on the film, how the crunch in production effected the film (much to his doing by admission), working with Richard Yursich, the three week post-production which effected the film (which a week to cut each version), the lack of a possibility of an alternate cut, and more.  There’s some great b-roll footage and cut scenes pulled off VHS. Note the interview was shot via Zoom interview.

Ghost Galleon (9:00) – is an all-new Interview With Writer Philip Eisner.  Eisner discusses how working with Gordon and Levin at the time and how tragedy struck and informed his writing.  The screenwriter discusses how the script changed from his initial inception as a “Shinning in Space” to what was produced.  There’s some great b-roll footage and cut scenes pulled off VHS. Note the interview was shot via Zoom interview.

Organized Chaos (7:51) – is an all-new Interview With Actress Kathleen Quinlan.  Quinlan discusses how she came on to the film, her search for a challenge to push her as an actor and also female roles of power, working at Pinewood studios, how large the production was, working with Anderson, working with Fishburne, and much more.  Note the interview was shot via Zoom interview.

Compassion In Space (8:33)– is an all-new Interview With Actor Jack Noseworthy.  The actor discusses how working on two Paramount films lead to this film, the script that attracted him and how that changed, working with Anderson, working at Pinewood, a tragedy that informed his work, working with the Make-Up FX artists, and much more.  There is some great b-roll footage of his make-up work and also the production of the Air Lock scene.  Note the interview was shot via Zoom interview.

The Doomed Captain (2:55)– is an all-new Interview With Actor Peter Marinker.  Marinker who plays the Captain of the Event Horizon (only seen in Video) discusses how he got the role and working on the set and more.

Space Cathedral (5:32)– is an all-new Interview With Production Designer Joseph Bennett.  Bennett discusses the script and the speed of the production, working with Anderson, and much more.  Note the interview was shot via Zoom interview.

Something New (7:31) – is an all-new Interview With Set Decorator Crispian Sallis. Sallis discusses how he got the job from Designer Bennett, the distinction between the ships Lewis & Clark and Event Horizon, the inspiration from cathedrals, how they pulled items from air plane graveyards, how he created light sources on the set, how they created the amazing green air ducts, and much more.

Taking Care Of It (3:21) – is an all-new Interview With Production Manager Dusty Symonds. Symonds recounts some of the troubles that occurred with the production with second unit/model making, and other production issues that occurred.

Reinforcements (3:53) – is an all-new Interview With Second Unit Director Robin Vidgeon. Vidgeon discusses how he got the Second Unit Directing job from Symonds, the chaos of the production he replaced, and more.

Almost Real (2:57) – is an all-new Interview With Location Manager Derek Harrington.  Harrington discusses how he got the job, the location work on the production itself, and more.

Screams From The Cosmos (6:37) – An Interview With Sound Designer Campbell Askew. Askew discusses how he was hired, the challenges during production, creating new sounds for the production, and more.

The Making Of Event Horizon – A 5-Part Documentary (1:43:00) – This great archival making of is divided into five parts that can be played all at once running close to 2 hours.  The production is handsomely produced and detailed deep dive.  The documentary takes us through every step of the production both good and bad.  The level of detail here is great and anyone that has not seen this from the DVD should definitely watch this.  Note: This originally created for the 2006 DVD edition of the film so the image source is 480P and has not been up-res’ed.

The Point Of No Return – A 4-Part Look At The Filming Of Event Horizon With Narration By Paul W.S. Anderson (8:13) – A collection of B-Roll footage with commentary by Anderson discussing the various set pieces of the film.  Anderson gives us some great details form the production during each of these collected pieces of B-Roll footage. The most interesting part is the final section has a great bit that was deleted from the film that Anderson and the DVD producers could not find the original deleted footage.

Theatrical Trailer (2:29) – Which looks to have had its own restoration done as it’s 1080P

Event Horizon two decades on is still a great sci-fi horror.  Scream Factory has given us a stacked Collector’s Edition.  HIGHEST POSSIBLE RECOMMENDATIONS!!!