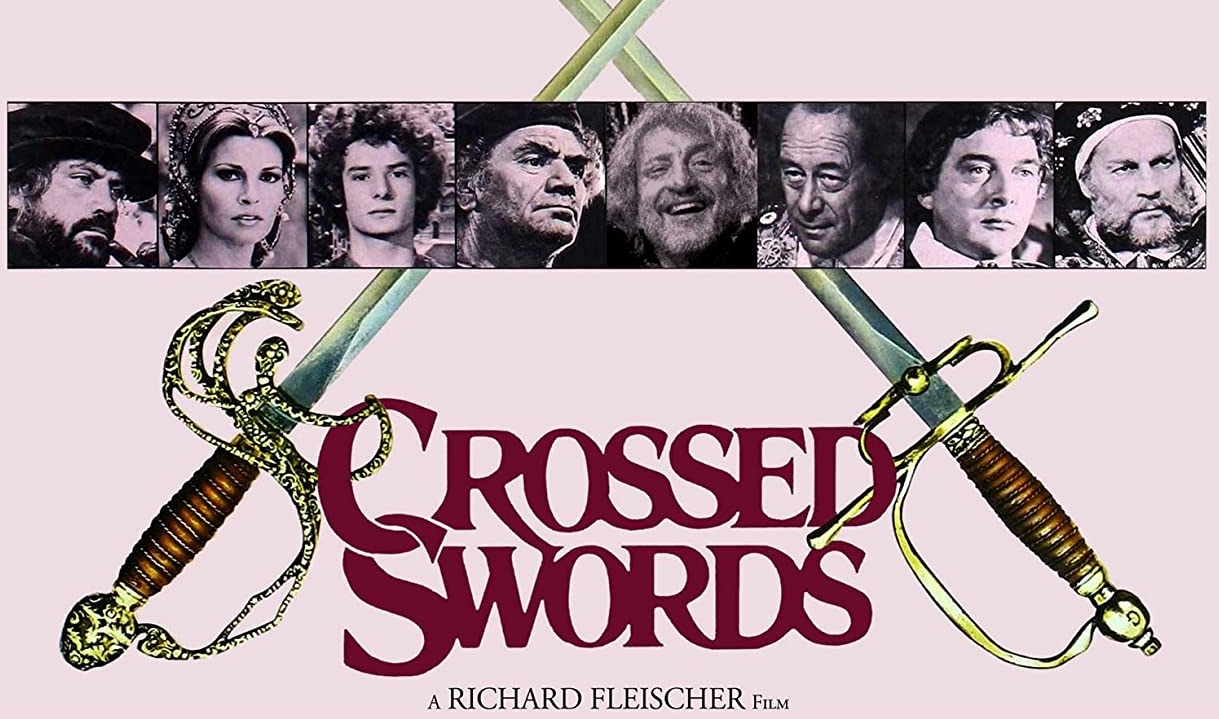 The Prince and the Pauper remade as a bawdy romp by director Richard Fleischer and the Salkind’s is overstuffed with All-Star Cameos. New on Blu-Ray from Kino Lorber.

They weren’t very good at Superman or Supergirl movies.  What they were good at was updating the swashbuckling adventure film.  Crossed Swords may not be as successful as their one-two comedic adventure romps The Three Musketeers and The Four Musketeers but it’s a lot of fun.

Prince Edward (Mark Lester) and a common thief Tom (also Lester) by chance switch spots as England is in turmoil as King Henry VIII (Charlton Heston) has passed.  Tom now the Prince soon to be crowned King is literally mucking everything up in the court.  Edward now a common thief is along the ride with his abusive stepfather (Ernest Borgnine).  The only help for the two switched to get back to their rightful place is a brawling returned from war Sir Miles Hendon (Oliver Reed).

The film is nowhere near as good as Lester’s revitalize of the genre.  That touch that Lester gave the films is absent.  Fleischer is an acceptable choice who brings a solid sheen and gloss to the proceedings.  Those expecting that messy mise en scéne ala Marx Brothers comedy that Lester brought to the Beatles film will be sorely disappointed.  Fleischer doesn’t have that sort of whimsical nerve as a director.

That does not mean the film is not without its charms.  Reed steals the show by being the Oliver Reed of legend.  Serious, righteous, fighting, angry, brawling man of England.  You can’t help but love Reed in the Star role as a true anti-hero who wants nothing to do with the Prince as Tom.  Fleischer knows well enough to give Reed the space to do whatever he wants.  It makes any of the scenes with the legend magic.  The moment that Sir Miles is shackled and eventually whipped by his brother (seething David Hemmings) is all-star power.  Reed is silently magnetic in the scene as rage courses through his veins.  It’s a hell of a performance in a film that is below it.

The main issue with the film is the cameo-intensive nature of the film.  The film is littered with these one-to-two scene roles populated by the likes of George C Scott, Raquel Welch, Rex Harrison, Heston, Borgnine, Hemmings, and more.  The moments are a part of a larger whole but feel like each actor is a distraction from the scene as each are just themselves.  Scott isn’t the thing of thieves as role dictates, no, it’s “ACADEMY AWARD-WINNING ACTOR” George C Scott.  It’s not Heston as King Henry VIII, it’s CHARLTON FUCKING HESTON as THE KING!!! Fleischer is more than willing to accommodate his actors in this regard letting them go as arch as they want to be.

Crossed Swords is fun and is knowing enough to have a sense of fun throughout the course of its set pieces, both comedic and action.  You’ll have a fun time though those expecting the film to be close kin to Richard Lester’s work with the Salkind’s will be slightly disappointed.  Though only slightly as this adventure film is definitely a good time to be hand.

The newly recorded commentary track with historians Howard S Berger, Steve Mitchell, and Nathaniel Thompson is an informative and fun track as per usual if one has listened to any of the commentaries this trio have been involved with together or separately.  Beginning with a recounting of the fact that this was the last first run movie to play at Radio City Music Hall and attending the film’s limited run there.  Details include the difference between Richard’s who worked with the Salkind’s – Fleischer (who directed Crossed Swords) and Lester (who directed The Three Musketeers and The Four Musketeers), the criticism at the time of star Mark Lester, the tensions between Rex Harrison and Charlton Heston and where it was originated from, the work of screenwriter George McDonald Fraser, filming in both Pinewood in England and Hungary, the various character actors (specifically Hammer Horror actors) that appear, the production design Anthony Pratt, the cinematography of Jack Cardiff and his long legendary filmography, the editing by Ernest Walter and his long list of great credits, how Fleischer taught a class in directing at UCLA during the 1980s, authorship and Fleischer, the stories about Oliver Reed unhinged method acting relayed by David Hemmings, the film’s reputation, and much more.  The group does a great job of giving us both the personal anecdotes and factual production information that makes for a solid commentary track.

Interview with Star Mark Lester (18:49) – the newly produced interview with star of the film Lester discusses the production.  Details include casting, why he joined the cast, working with Oliver Reed, turning 18 on the set, the legendary story of Oliver Reed’s “gift”, the technology and process they used to create the split screen performance, working with Ernest Borgnine, the acting styles of the various actors onset, working with Richard Fleischer, a great account of the arrival of Raquel Welch, a great (and scary account) of the fight scenes between Reed and David Hemmings, and much more.  Lester’s a good interview with his recall a lot of the production and working on the set of the film.

International Cut (2:01:30) – The international cut adds 8-minutes to the feature.  The additions are not really noticeable but is a great addition.  Note this version of the film is presented in Standard Definition.

Crossed Swords is swashbuckling fun for everyone.  Recommended.