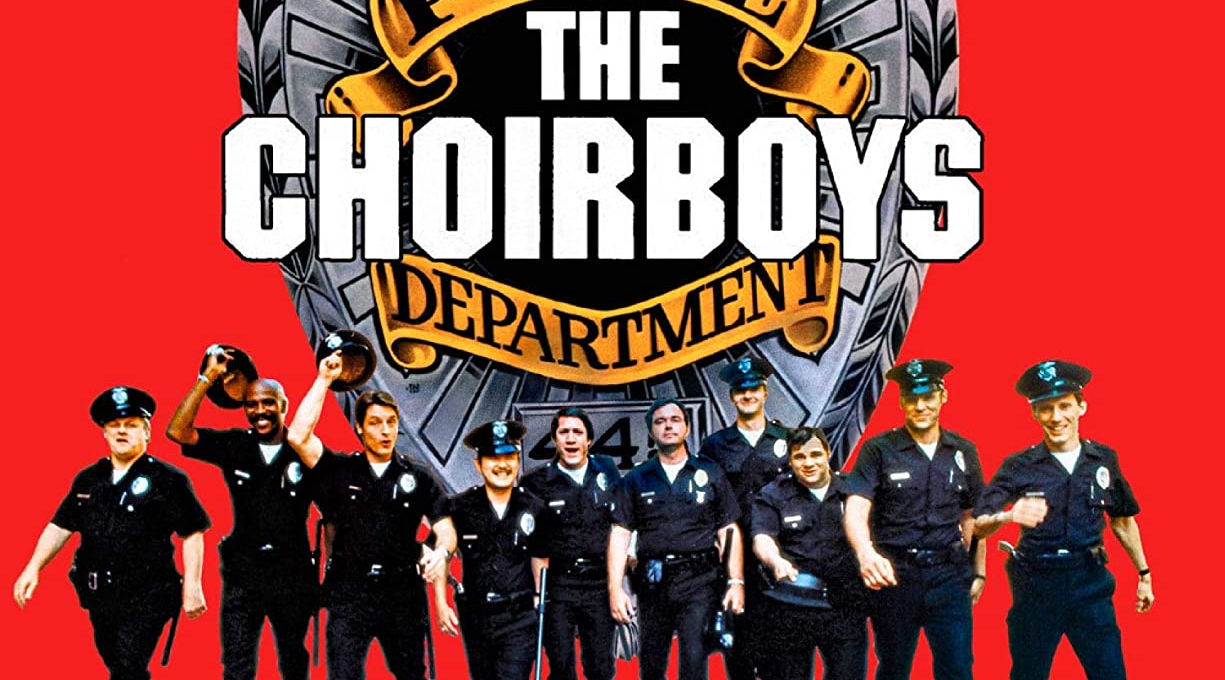 The Choirboys in the forty-years since its release has turned from comedy to outright scathing indictment of the police force.  New from Kino Lorber.

You can see the pitch now.  “Robert Aldrich directs M*A*S*H* with Police Officers!”  Let the cash roll in.  The problem is that the “boys will be boys” attitude is shocking and is what everyone fears police officers are.  Forty-plus years later Aldrich’s “comedy” turns out to be something entirely unintentionally different.

The life and times of LAPD uniformed beat cops.  Characters who have nicknames like Spermwhale (Charles During) and give women names like “No Balls” liter the story.  The film tracks the “fun times” of these cops as they do “fun things” like force a suicidal woman to jump off a ledge, joking about illegal chokeholds, abuse sex workers, throw racial slurs at citizens, get drunk, and shoot at ducks in MacArthur Park, kill homosexuals… and on and on and on… though because these guys are laughing it’s all in fun and “boys will be boys.”

Tone-deaf doesn’t begin to explain how this film plays now.  Aldrich wanted to show cops as they really are.  Which he does… in as stark terms as humanly possible.  But it’s this tone that it’s funny in the way that M*A*S*H* is funny with attempts at gallows humor hits a brick wall.  What appears to be Aldrich trying to make some indictment of the system by way of scathing black comedy just doesn’t work.

The film has ultimately evolved into a sobering look at what cops do.  There isn’t an ounce of humor to be taken here as they abuse a public, they’re to serve and protect.  Unintentionally, the film feels like the most modern take on the Police Department in the era where we have begun to shine a light on the Brutality, Racism, Sexism, and Fascism in every Major Metropolitan Police Force.

In that regard, The Choirboys, is an angering, sobering look at what’s been broken for a long time.

Kino Lorber has done it again and given is a beautiful transfer for a Universal Catalog title.  There is nary a scratch, blemish or fleck of dust. The transfer is razor sharp with beautiful color reproduction and a tempered grain structure.  The disc looks like an archival film print in the best way.  Though if one is familiar with the “Universal Look of the 1970s”, The Choirboys fits that mold perfect.

The newly recorded commentary by historians Howard S Berger and Nathaniel Thompson is an informative one that they freely admit how offensive this film can be this time especially considering current events we are living through with Police Brutality.  Details include how Aldrich came onto the project, his work with Lorimar Productions, the lack of respect for Aldrich from the cast, seeing the film during Christmas time (which it was released) during its initial run, how Berger read the book in 5th Grade, the original 4-hour rough cut, the style and tone of the piece and difficult editing the film, Aldrich’s approach to how the police were approached, the approach Waumbaugh vs Aldrich and the tension, it’s relation to the Police Academy series, Aldrich’s career at this point, the changes that were made that caused Waumbaugh to sue Lorimar, and much more.  Berger and Thompson do a great job on this informative track dissecting this oftentimes-troubling film.

Don Stroud Preaches to the Choir (7:41) – this all-new interview with actor Don Stroud discusses the set that doubled for MacArthur Park, being cast and actually wanting the Roscoe Rules, Working with Robert Aldrich, Aldrich re-writing the script, and his stylistic approach to the film, and much more.

Radio Spots (1:35) – the three radio spots play out against a production photograph.

The Choirboys in 40 years has turned from dark comedy to sobering condemnation.