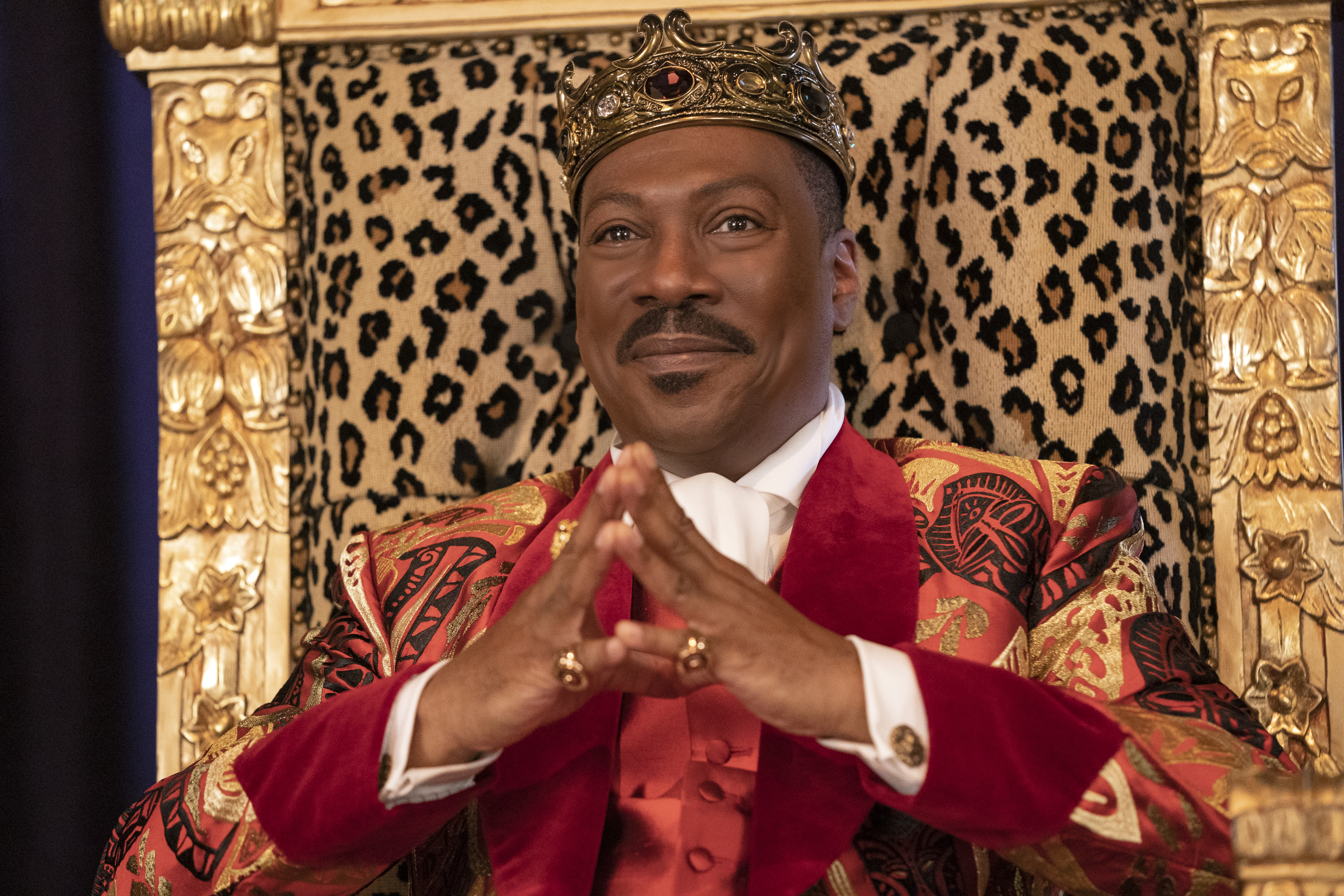 Eddie is back in one of his most iconic roles as the Prince of Zamunda!

Much has changed since Eddie Murphy’s Prince Akeem traveled to Queens, New York to find his literal Queen. Coming 2 America proves that as much as things have changed, much has not and that’s comforting.

The land of Zamunda is still a thriving wonderful nation but trouble is brewing.  Akeem (Murphy) and his Queen, Lisa (Shari Headley) have a wonderful trio of daughters Princess Meeka (KiKi Layne), Princess Omma (Bella Murphy), and Princess Tinashe (Akiley Love).  But no son, and by Zamunda laws, no true Heir to his thrown.  This is the power grab situation that General Izzi (Wesley Snipes) Ruler of Nextdoira can use to take control of Zamunda.  It is King Jaffe (James Earl Jones) that sends Akeem, and Semmi (Arsenio Hall) his best friend and aide, on his quest back to America to find his long-lost son Lavelle (Jermaine Fowler).  Lavelle could be Zamunda and Akeem’s only hope of saving the Nation.

Coming 2 America provides a good balance of new and old to create a sequel that is a continuation of the original as much as it remakes the original.  Though many will complain about the PG-13 rating impedes the film’s comedy.  It does not as Murphy and the writers, who include Kenya Barris, Barry Blaustein, David Sheffield, and Justin Kanew have crafted a story about family that feels right at home with Murphy’s Nutty Professor Series.  Like that series, the sincere, comedy, and raunch are combined with equal aplomb.

Dolemite is My Name was a return to form for Murphy. Director Craig Brewer continues his successful collaboration with Star.  Both men understand exactly what we loved about the original and gives us more.  The film is not only a showcase for Murphy but is also an ensemble piece providing the deep roster cast time to individually shine.  Considering that both Murphy and Hall both have at least 4 additional Make-Up heavy roles that is an amazing feat.  Adding to the complexity is the film runs under 110 minutes.

Brewer adeptly directs the comedic set pieces involving multiple Murphy’s and Hall’s with style and aim towards seamlessness that was a trademark of the original.  The director excels and pushes one of the most pleasant surprises of the movie, the musical numbers.  There are no less than five musical numbers that are staged with the sort of style and sophistication that you come to expect from Brewer.  In fact, one could say that is one of the areas that Coming 2 America truly outdoes its predecessor.  To discuss more would be to ruin one of the many surprises in the film.

Though ultimately the film’s success lands on its star and cast.  The smartest move the film did was bringing back the original cast and adding new blood.  The mixture is one that empowers both Murphy and Hall to shine as bright as before.  The film proves without a doubt that Hall was Murphy’s best co-star and they have chemistry to spare.  The barbershop scenes, as with the last film, manage to be the comic highlight of the film because of that chemistry.

The best moments of the film however are between Murphy and Headley.  They carry gravity because of our relationship with them Akeem and Lisa over the last three decades.  It also helps that Headley and Murphy both bring their A-Game and make their moments of conflict actually count and mean something.

The new cast headed by Jermaine Fowler, Tracy Morgan, Leslie Jones, and Teyana Taylor all bring energy to the sequel.  Though it’s KiKi Layne and Wesley Snipes that steal the show.  Layne has continually proved that she is a Star waiting for superstardom.  Here as the eldest Princess Tinashe, Layne is given a role with a genuine dramatic arc.  She elevates any scene that she’s in, especially the ones with Murphy.  Snipes continues to prove why so many of us loved his early work.  Much like in Dolemite is My Name the actor is a comedic assassin and also proves to be an amazing dancer (you’ll see).

Coming 2 America is a welcome sequel that you will not dread watching or even rewatching.  They have found the right balance of old and new that will have any fan of the original happy they’ve made this sequel.