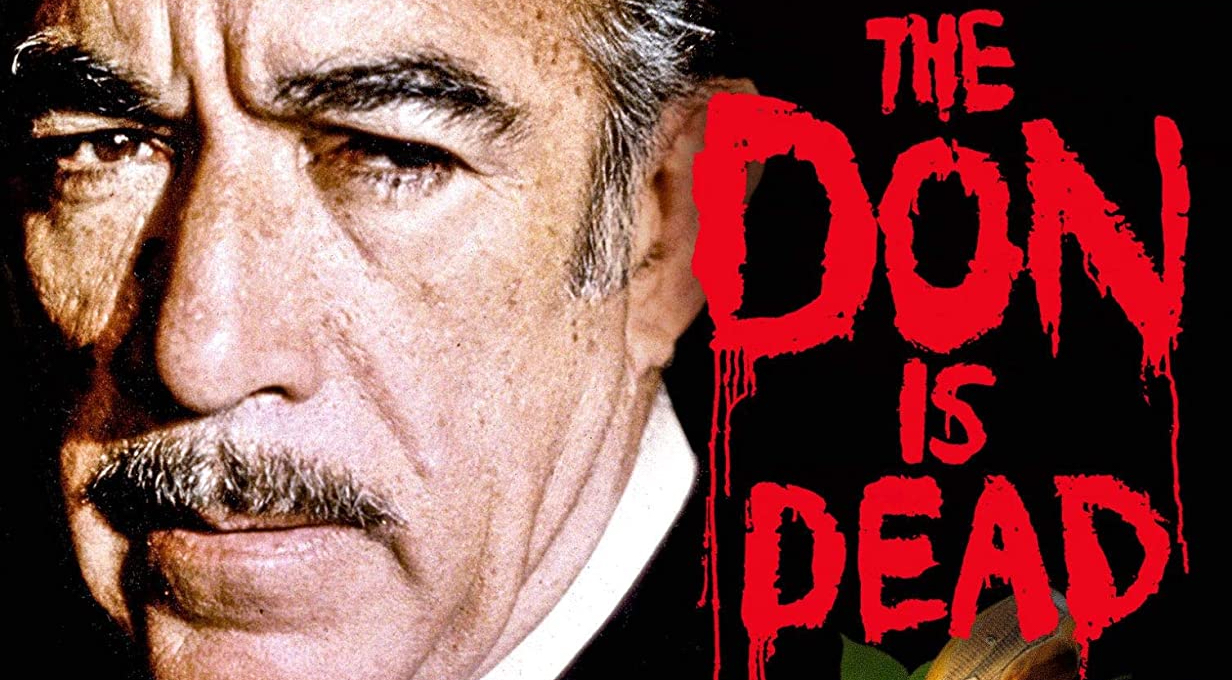 The Don is Dead is a B-Movie Godfather cash-in with A-List Talent.  That doesn’t mean it isn’t fun.  New to Blu-Ray from Kino Lorber.

Richard Fleischer knew how direct and stage action.  The emotional heft, machinations and chess like maneuvering of Coppolla’s Epic is all but absent.  The result is an exploitation version that doesn’t come even close to the film.

Frank (Robert Forster) and Don Angelo (Anthony Quinn) begin a Gang War over a torch singer (Angel Tompkins).  It all stems from the Machevelli style plan of Luigi Orlando (Charles Cioffi) and his wife.  Can anyone stop these two men from murdering each other.

The film is filled with a who’s who of actors.  Along with Quinn, Forster, Cioffi, you have Frederic Forrest, Al Lettieri, Barry Russo, Abe Vigoda, Victor Argo, Sid Haig.  Many of them in cast in The Godfather the year before.  Quinn and Forster here are the pushing the edge.  Quinn trying to play what can be amounted to a “Sexy Don Vito”.  Forster no better playing the “Sonny” hothead archetype.  It isn’t to say they aren’t good.  Everyone does a good job.  Its they’re hampered by the ridiculous script.

The script by Christopher Trumbo (yes, son of Dalton) is ham and cheese at every turn.  Now, in the case of The Don is Dead it’s the some of the best aged ham and best aged cheese.  Not the very best though.  Fleischer’s direction is solid but it doesn’t elevated the material beyond your standard crime/gangster thriller.

One does wish that Fleisher and company did not film this on the Universal backlot as appears to be the case.  It gives the film the look of a Rockford Files episode that one can’t shake no matter how beautiful the widescreen cinematography is.  Though anyone that loves this particular genre will find much to be entertained by in The Don is Dead.  It just isn’t the undiscovered classic you want it to me.  It settles for cult exploitation.

If one were curious if studio heads had gotten their way at every turn with The Godfather, The Don is Dead is a pretty accurate indicator.  Entertaining but zero heft.

Kino Lorber has done it again and given is a beautiful transfer for a Universal Catalog title.  The Don is Dead probably never looked this good during its initial theatrical release.   There is nary a scratch, blemish or fleck of dust. The transfer is razor sharp with beautiful color reproduction and a tempered grain structure.  The disc looks like an archival film print in the best way possible.

The newly recorded commentary by Historian and Critic Sergio Mims is a great listen.  Details include the rise of the gangster film post-The Godfather, how this film was produced in the wake of that film’s success, the career of Richard Fleischer, the personal and professional life and times of Anthony Quinn, the personal and professional life and times of Robert Forster, the career of Richard Fleischer, the careers of his contemporaries (e.g., Wise, Dmytryk, et. al.), the studio system including the studio lots that entries like The Don is Dead were shot in, the Christopher Trumbo and his father Dalton (who was blacklisted) and his fellow screenwriters of the film, the career of Fredrick Forrest (including an interested tidbit about the film he starred in Hammett), Abe Vigoda, how the initial failure of Dr. Doolittle effected Fleischer’s career and along with other films post-Doolittle and how he adjusted his style and it informed this film, the career of Edith Head and her work in this film, the career of Hal B Wallis (who produced the picture), and much more.  Mims delivers a commentary overstuffed with information and the kinds of side tangents that film fans love.

The Don is Dead is straight ahead B-Movie goodness.  Recommended!